Deb Atchley has suggested the following links for more information on iron furnaces in Kentucky:

Thanks, Deb!
Posted by Brenda Joyce Jerome at 5:22 PM No comments: Links to this post

Many of us with Lyon County, Kentucky connections had ancestors employed in the manufacture of iron. Two of these businesses are mentioned on page 214 in Iron Manufacturer's Guide to the Furnaces, Forges and Rolling Mills of the United States by J.P. Lesley; John Wiley, Publisher, 1859.

Union Forge, on the right bank of the Cumberland river, three miles from Suwannee Furnace, two miles below Eddyville, in Lyon county Kentucky, owned by Kelly & Company, and managed by John B. Evans, was built about 1840 and rebuilt in 1854, has 8 knobling fires and 1 hammer driven by steam, and made in 1856 about 1,000 tons of blooms out of pig iron.

Tennessee Iron Works, on the right bank of the Cumberland river, ten miles above Eddyville, in Lyon County, owned by Hillman Brothers, and managed by George Hillman, was built in 1846, has 22 knobling or refining fires, 1 puddling furnace and 1 hammer driven by steam, and made in 1856 3,384 tons of blooms out of pig metal with a little scrap. 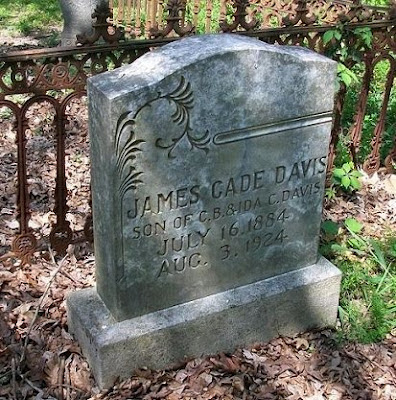 According to his obituary in the Paducah News Democrat of Tuesday, 5 August 1924, Cade Davis, formerly of Paducah, died in Hopkinsville following an illness of two years. He was a native of Smithland. Among his survivors were his widow, Mrs. Margaret Davis; son, James Douglas Davis; brother Tom Davis; sister, Mrs. Kate Davis Love and his parents of Smithland.

Records of coroners' inquisition are not always easy to find. A few counties might have formal records, but most counties do not. The majority of records I have found were filed with county court records. The coroner would want to be paid for his work and, thus, would submit a claim to county court for payment. You might also find the claim for payment listed in the county court order books (court minutes).

The following claim for payment was found among other county court claims in Crittenden County in 1885. It reads as follows:

Posted by Brenda Joyce Jerome at 2:26 AM No comments: Links to this post 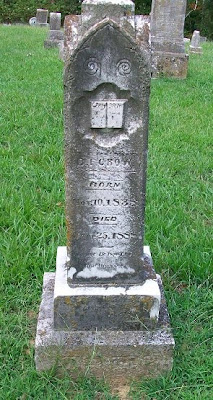 According to his obituary in the 28 June 1888 issue of the Crittenden County newspaper, "Mr. Frank Crow, a well-known citizen, died at his home in Marion Monday afternoon, June 25, 1888, after an illness of several weeks. He was a man of pure character, kind disposition, and a good, useful citizen. The remains were interred at the Fowler graveyard Tuesday evening."

Posted by Brenda Joyce Jerome at 3:12 AM 2 comments: Links to this post

Matthew Lyon's name is well known in Kentucky. Born in County Wicklow, Ireland in 1746, he had made a name for himself in Vermont during the Revolutionary War as a member of the Green Mountain Boys. After the war he was elected to the state legislature and founded the town of Fair Haven in 1783. He also served in congress from 1797 until 1811. In 1798, he was indicted for publishing a letter said to inflame the citizens and "bring the president and government of the United States into contempt." As a result, Lyon spent four months in jail and was fined $1000. A few years later, he moved his family to Kentucky. In 1820 he moved to Arkansas, where he died two years later.

Matthew Lyon's son, Chittenden, was born in Vermont in 1786 and moved with his father and family to Caldwell County, Kentucky in 1801. In Kentucky he was a member of both houses of the Kentucky legislature and later was elected a representative of Kentucky to congress. Lyon County, Kentucky was named in his honor. It is said he inherited the "impetuous Irish temper of the father, and was a man of gigantic stature, strength, and prowess, being fully six and a half feet in height, and weighing 350 pounds." Chittenden Lyon died 8 November 1842.

Posted by Brenda Joyce Jerome at 2:52 AM No comments: Links to this post 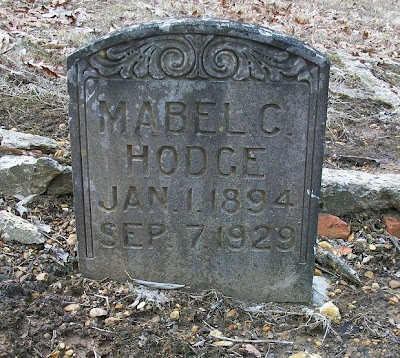 Mabel C. Hodge appears on the 1910 Livingston County, Kentucky census in the household of James C. and Lula C. Hodge. Others listed in the Hodge household on the census were Corinne, Mae and grandmother, Vina Carson. All were listed as mulatto.

A Kentucky death certificate for Mabel C. Hodge has not been located. James and Lula Hodge moved to Paducah, where they both died, James in 1933 and Lula in 1943. They are buried beside Mabel in Smithland Cemetery.

Posted by Brenda Joyce Jerome at 3:23 AM No comments: Links to this post

When a woman who had no means of support gave birth to an illegitimate child, the woman often appeared before the county court to name the father and obtain support for the child. The goal was to prevent the child from becoming a charge upon the county.

Most, if not all, counties have bastardy case files. They are usually located among loose county court papers and may also be recorded in the county court order books (court minutes). Bastardy case files usually contain the following information: name of the mother, name of the alleged father, sex of the child and the age at the time the case was filed in court. Keep in mind, however, that if the woman and/or her family preferred to support the child, there was no need to take the case to court and no bastardy charges were filed.

The bastardy cases for Caldwell County are filed in archival boxes in the county clerk's office in Princeton, Kentucky. The files are dated 1815 - 1924, but I found one dated 1812. The following cases are among the earliest filed in Caldwell County.

Polly Newman charged Hiram Pinnel as the father of her child, who was born 20 July 1815. Summoned to testify were Joseph Easley, James Clayton and Old Mrs. Newman to appear in Eddyville 17 December 1816.

Polly Bird charged Milton Finley as the father of her female bastard child, who was delivered 7 November 1817 at the house of Thos. Hancock.

Polly Guess, single, swore on 15 October 1819 at the house of Joseph Guess being on the road leading from Princeton to Flins Ferry about 12 miles from Princeton that she was delivered of a female bastard child and the child is likely to become chargeable to the county and has charged Robert Hooker, laborer, with being the father. Hooker posted bond on 18 October 1821.

Mary Freeman, single and not a slave, delivered a male child 24 April last [1819] at the house of Daniel Warmarlsdorf in Livingston County and Preston Grace is the father of the child. Mary is unable to support sd. child herself and prays for relief.

Priscilla Armstrong, single woman, was delivered of a female bastard child, who was delivered 28 December 1820, and is likely to become chargeable to the county and hath charged Isaac Sampson, laborer, of having begotten her with child. The charge is dated 29 December 1820.

Abigail Johnson was delivered of a female bastard child 26 January 1822 at the house of Benjamin Johnson and charges James M. Hall as the child's father.

Matilda R. Duning was delivered of a female bastard child 4 February last [1822] and charges William Galoway with being the father.

Posted by Brenda Joyce Jerome at 2:41 AM 4 comments: Links to this post

Willard Library's annual Midnight Madness will be held in Special Collections Department (2nd floor of the Library), 21 First Avenue, Evansville, Indiana June 18-22, 2012. Special Collections will be open from 9 am to 12 midnight for 5 days and nights. Many classes are scheduled during the week or you may research on your own.

Among the classes offered are the following: Beginning Genealogy, He Had What? 19th Century Medical Terminology & Treatment, Source Materials to Kick-Start Your Research, Kentucky Research, Churches, Cemeteries and Their Records, Joining DAR, Things I Found in Search of Other Things, Entertaining Our Evansville Ancestors, Building Our Past: Local Historic Preservation Resources at Willard Library, Evansville State Hospital: Its History and Its Records, Becoming a Certified Genealogist, Tombstone Art, Language of Wills & Estates, German Research, Jewish Research and Printing Your Family History.

All classes are free and open to the public. Reservations are requested, but are not required.

More information and can be found Here You may also email lmartin@willard.lib.in.us
Posted by Brenda Joyce Jerome at 7:10 PM No comments: Links to this post