In January 1916, new members of  the Marion City Council took office and the local newspaper, the Crittenden Record - Press, published biographical sketches of each member, along with their photographs.[1]  The following sketches have been abstracted from this newspaper article.

Councilman J.N. Boston:  J.N. Boston is not only large- [sic] interested in farming in the Repton section where he owns one of the most improved bodies of land in the county, and he also is the holder of a large block of stock in the G.A. Terry land, which is a fine agricultural body as well as in the heart of the mineral belt. The Boston Planning Mill, which supplies this section of the state with sash, doors, lumber and all household accessories, is the creature of his indomitable will and industry. He was born at Hillman's Rolling Mill in Lyon County almost 50 years ago.

Councilman John H. Nimmo: John H. Nimmo is the Watkins Remedy Man and is well known in every corner of Crittenden County. He owns a beautiful home on North Main street, where he and Mrs. Nimmo and their handsome children live under their own vine and fig tree. He is a "Chopper" and is never happier than when in a W.O.W.[2] celebration or camp.

Councilman Thomas A. Rankin: Councilman Rankin is the head of the board and will do much to steady the deliberations of the "boys." He is the oldest member although only a little past the half century mark. He was born in the northern section of this county and belongs to one of the oldest, most substantial and aristocratic families in the state. He not only owns his home here but a fine Ohio River farm as well and lives at home and boards at the same place with his handsome family, consisting of his wife, two daughters and one son.

Councilman Wm. O. Tucker: Councilman Wm. Oliver Tucker has built up a large business here in furniture and undertaking and is now operating a chair factory which is meeting with success, as its product is being shipped to many sections of the country. Mr. Tucker is a native of McLean County, but came here as a young man and has since resided here. He is just past 41. He resides with his little family, a wife and two children on North Main Street. Mrs. Tucker is a daughter of former chief justice T.J. Nunn, one of Crittenden's best loved men.

Councilman J.R. Perry:  Councilman Perry is the son of J.B. Perry, the farmer and banker of the Irma section, and was born on the big Perry farm on the Tolu Road. He took his degree at the Hospital College of medicine in Louisville. His wife was Miss Beulah Franklin, of the Hebron section. They reside in their own home on West Depot Street, and have one little daughter.

Councilman George W. Yates:  Councilman Yates was born in this county near Sheridan but has lived here and sold pianos so long that Marion claims him as her own. He belongs to the singing and musical family and is said (by C.R. and W.B.) to be the oldest member of the family now living. He has made good in his business, owns his home and has a most interesting little family.


Published 27 June 2019, Western Kentucky Genealogy Blog,  http://wkygenealogy.blogspot.com/
Posted by Brenda Joyce Jerome at 5:30 AM No comments: Links to this post 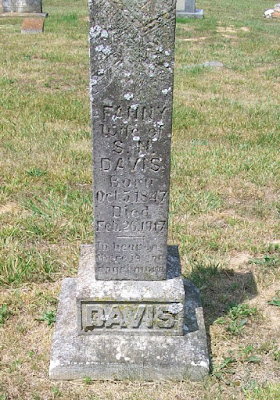 Silas N. Davis, age 77, and wife Fanny, age 62, were living on Dycusburg Road in 1910.[1] Silas was born 13 February 1831, died 11 June 1912 and was buried in Fraziers Grave Yard, according to his death certificate. [2]  Fanny Davis was born in Tennessee and was a widow at the time of her death. Her parents were Wiley Rhea [sic] and Betsie Dee, both born in Tennessee. [3] Fanny died of LaGripp, a forerunner of the deadly influenza pandemic later that year. 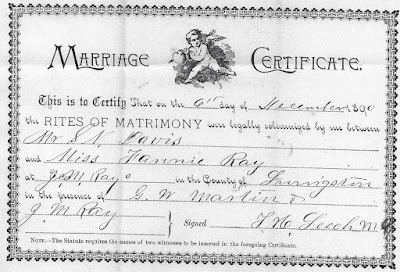 At the junction of U.S. 60 and Highway 137 in Livingston County, Kentucky, stands a monument honoring Lucy Jefferson Lewis, youngest sister of Thomas Jefferson, who was the third President of the United States 1801-1809. At first it might seem strange for this monument  to be in Livingston County, but there is a basis for it being located there.

In late 1807, Lucy Jefferson Lewis, her husband, Charles L. Lewis, and their children,  including adult sons Randolph and Lilburne,  left Albemarle County, Virginia to start a new life in Kentucky. Another adult son, Isham, would arrive in Kentucky a little later. When the Lewis family arrived in Kentucky, the state was 15 years old and Livingston County was even younger, being in existence only eight years. Livingston County was sparsely settled, but land was available and there was  opportunity  for a fresh start, especially if  you were in debt like the Lewis family.

Lucy and her family barely had time to settle in and get to know the names of their neighbors before  they were greeted with adversity.  First, Elizabeth, the young wife of Lilburne Lewis, son of Charles L. and Lucy, died, leaving five young children.  Then  Lucy Jefferson Lewis,  died on the 26th of May 1810. Her daughters described her death in a letter to their Uncle Thomas Jefferson: "She gragulery waisted away with little or no pain, for eighteen months enturely sensable to her last moments ...[1] Lucy was buried at the top of the hill overlooking the Ohio River with her grave marked only with a rough stone.

Randolph Lewis, Lilburne's brother,  was likely ill when he wrote his will in January 1811 as he passed away the following month.[2]  Sickness and death seemed to follow the Lewis family - and their troubles were not over.

Later that year the earthquakes began, frightening everyone who felt the shocks and saw the after effects.  And the most horrendous event of all - the murder of George, the teenage slave who was murdered by Lilburne Lewis and his brother, Isham, because he broke a pitcher belonging to the Lewis brothers' mother, Lucy Jefferson Lewis.  [3]

At this point, Lucy Jefferson Lewis fades from the history books. It is almost as if she had not existed ... until  Mrs. C.E. Purcell, published Stories of Old Kentucky  in 1915 and described Lucy Jefferson Lewis' burial site - "A sunken place, overgrown with the wild wood ..."  In 1920, Fred Neumann, Paducah newspaperman, wrote that only the student of history knew that in Livingston had lived "a Virginia flower," whose brother was Thomas Jefferson.[4]

Interest in Lucy Jefferson Lewis grew and a  drive was organized  to erect a monument in her memory. On the 26th of June 1924, at a called session of the Livingston County Fiscal Court, $50 was appropriated to pay for the Lucy Jefferson Lewis monument and a small park of one-half acre was purchased from W.H. Warren. [5] Citizens also contributed to the cost of the monument.

The monument is simple, but impressive. 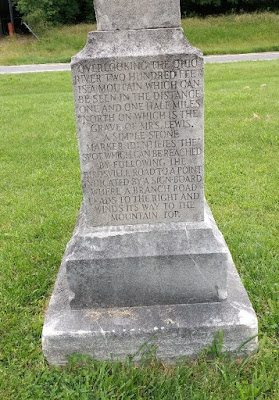 Overlooking the Ohio River 200 feet is a mountain which can be seen in the distance, 1  1/2 miles north of which is the grave of Mrs. Lewis. A simple stone marker identifies the spot which can be reached by following the Birdsville Road to a point indicated by a sign board where a branch road leads to the right and winds its way to the mountain top.

Lucy Jefferson Lewis is not known for heroic deeds or special talents, but she does represent the pioneer women who gave up an easier life to make a home in the backwoods of western Kentucky.

Another monument has joined that of Lucy in the little park. It is that of Lieutenant Colonel John Montgomery, soldier and pioneer. We will save him for a later blog post.

Published 20 June 2019, Western Kentucky Genealogy Blog, http://wkygenealogy.blogspot.com/
Posted by Brenda Joyce Jerome at 5:30 AM No comments: Links to this post 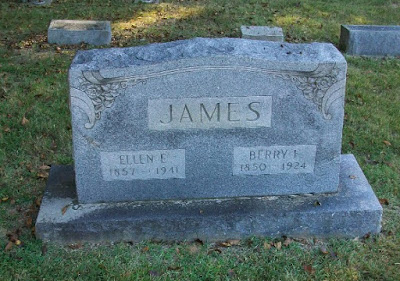 According to his death certificate, Berry Franklin James  was born 19 May 1850 Crittenden County and died 31 January 1924. His parents were listed as Alexandra James and Harriett Smart, both born in Tennessee.[2]

Roster of Men Who Died in World War I Part III

In 1919, the names of Kentucky soldiers who lost their lives during World War I were published in several newspapers, including the Louisville Courier-Journal, The Hopkinsville Kentuckian, and the Owensboro Messenger. The many deaths from disease were due largely to the influenza epidemic.

Marion, Ky., Oct. 13 - The body of Private Joe Hoover, 21 years old, son of Mr. and Mrs. W.L. Hoover, of Crittenden county, who died Friday of influenza at Camp Zachary Taylor, arrived here today en route to his home near Irma. Besides his parents, he is survived by a wife. The funeral was held today at the home of his parents. [1]

Marion, Ky., Oct. 8 - Telegrams have been received here by the parents of two Crittenden county boys who died in France - Private Luther Horning, of pneumonia, and Private John Franks, of wounds received in action. [2]

Other counties will be listed at a later date.

Published 13 June 2019, Western Kentucky Genealogy Blog, http://wkygenealogy.blogspot.com/
Posted by Brenda Joyce Jerome at 5:30 AM No comments: Links to this post 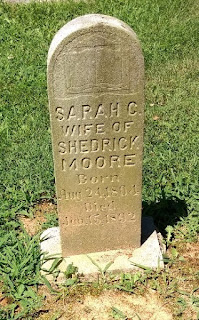 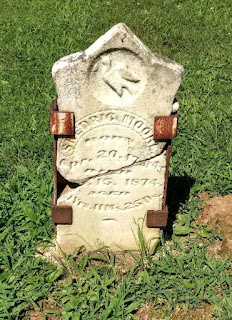 Shadrick/Shedrick Moore and family had migrated to Western Kentucky by 1833, when Shadrick was listed on the Livingston County Tax List.[2]  That year he was listed with one white male only. He owned no land and had no horse.

According to his death record, Shadrick Moore died 10 April 1874 of pneumonia at the age of 80.[5] His father and mother were listed as L. and S. Moore.


Published 11 June 2019, Western Kentucky Genealogy Blog, http://wkygenealogy.blogspot.com/
Posted by Brenda Joyce Jerome at 6:00 AM No comments: Links to this post 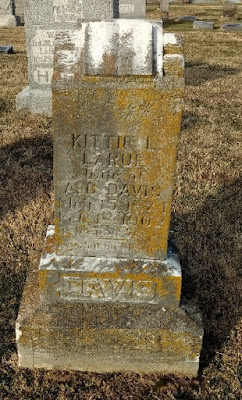 Kittie Lee Larue was born in Livingston County  in 1874 to Marion and Eliza E.  Kidd[1] and married A.G. Davis 3 March 1901. The next year their only child, a son, was born and one day after his birth, Kittie passed away. The baby son died  five months later. 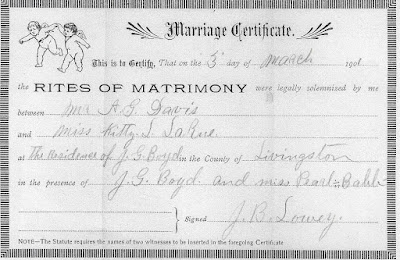 According to her obituary, Kittie Lee Davis died at her mother's home (Mrs. Browning) in Salem, Kentucky. [2] She professed religion in 1894 and joined the Methodist Church South in 1898. She left a mother, husband, three sisters and one brother to mourn her loss.

Buried next to Kittie is her mother, Eliza Browning. The 1900 census shows Elizabeth [sic] Browning, widow, with her son, Fred G. LaRue, and daughter, Kittie L. LaRue, in the household.[3] 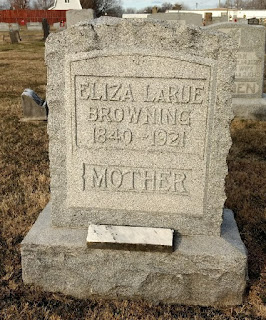 
Published 6 June 2019, Western Kentucky Genealogy Blog,  http://wkygenealogy.blogspot.com/
Posted by Brenda Joyce Jerome at 5:30 AM No comments: Links to this post 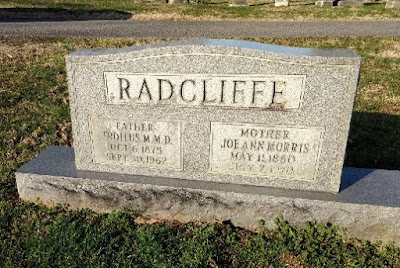 According to his death certificate, Troilus M. Radcliffe was a "doctor of medicine" and the son of Matthew Radcliffe and Maggie Hunter.[1] He was married at the time of his death.

Dr. Radcliffe graduated from Louisville School of Medicine 4 July 1904 and hung out his shingle in Tiline, Livingston County, the following year. From Tiline he moved to Smithland, where he practiced medicine until 1927. From Smithland he moved to Eastern Kentucky, where he served as a company doctor for a coal mining operation. After 12 years in Eastern Kentucky, he returned to Livingston County.  He died just a few days before his 87th birthday.[2]  Funeral services for Dr. Radcliffe were held at Smithland Methodist Church.[3]

Mrs. Joe Ann Radcliffe's funeral was also at Smithland Methodist Church. Survivors included a daughter and son, along with grandchildren and great-grandchildren.[4]


Published 4 June 2019, Western Kentucky Genealogy Blog, http://wkygenealogy.blogspot.com/
Posted by Brenda Joyce Jerome at 5:30 AM No comments: Links to this post