"We your undersigned petitioners represent ... that Benjamin Kilgore deceased on the 22nd of March 1802 made his last will and testament which is duly recorded in the Clerks office in Livingston County by which among other things, he ordered that one of your petitioners Jonathan Kilgore be schooled so long as will enable him to read write and cyphir well as far as the rule of three at the expence of his estate which was of a large amount to wit, of the amount of $4000, after satisfying all the just debts of sd. decedent. And we further represent ... that Jonathan Kilgore has not received any or very little schooling ... although he hath since arrived to the age of 21, married and petitioners being doubtful whether Jonathan Kilgore is entitled to an allowance out of sd. estate for sd. schooling & to settle and amicably adjust sd. difference between your petitioners Jonathan Kilgore and Jane Kilgore acting Executrix of the last will & testament of sd. decedent ... and to save sd. Executrix harmless ... we pray that your Honor that you would appoint referees to settle and adjust sd. difference ... and do all other things concerning sd. differences which may seem just and equitable... [signed] Jonathan Kilgore.

"Arthur H. Davis, William Wadlington and Reuben Rowland, arbitrators appointed by the Judge of Caldwell Circuit Court at the June Term 1818 to settle all matters in dispute between Jane Kilgore executrix of Benjn. Kilgore dec'd and Jonathan Kilgore, one of the legatees of sd. decedent ... give the following opinion ... it would require two years for a boy of ordinary Capacity to learn at the country schools in a new county to read and write and cypher well to the rule of three - expences for same $16.00; for two years boarding $50 pr year $100; washing &c; the lapse of time $14. Total $130. Therefore we give it as our opinion that sd. Jane pay Jonathan the sum of $130. [signed] 9 Sept. 1818. A.H. Davis, Wm. Wadlington, Reuben Rowland." 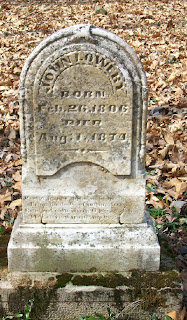 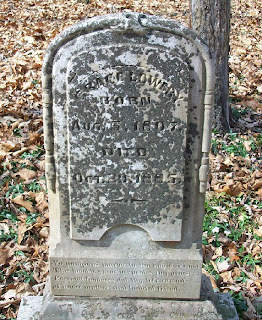 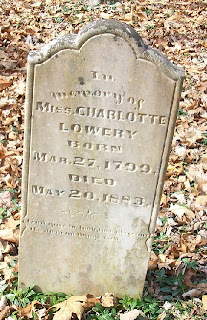 John and Charlotte Lowry [sic] are listed as children in the will of James Lowry in Caldwell County Will Book B, page 155.

﻿
Posted by Brenda Joyce Jerome at 3:00 AM No comments: Links to this post

A Visit to Springwood Cemetery

During a recent visit to Greenville, South Carolina, I visited a large, well-kept cemetery located right in the heart of the city. Some of the early settlers of western Kentucky came from Greenville and surrounding counties and I wanted to see if the tombstones were similar to what is found in Kentucky.

Springwood Cemetery dates from 1829 and is still being used. The grounds are well maintained with a vast assortment of styles of tombstones. These tombstones were photographed 9 March 2013. Click on the photograph for an enlarged view. 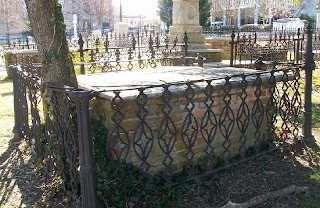 Box tomb in Springwood Cemetery﻿
I love box tombs and we see them fairly often in western Kentucky, but the ornate iron fence adds a special touch. 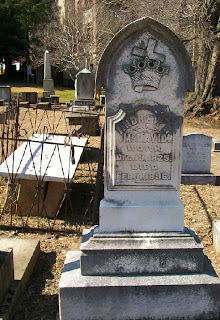 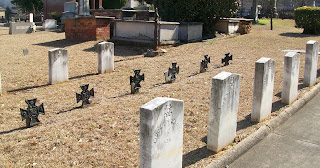 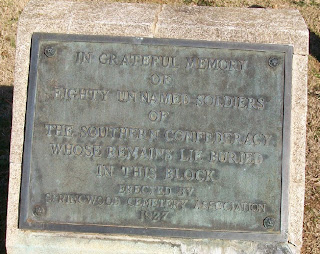 Marker near the CSA tombstones
Published 23 March 2013, Western Kentucky Genealogy Blog, http://wkygenealog.blogspot.com/
﻿
Posted by Brenda Joyce Jerome at 3:00 AM No comments: Links to this post

Slaves in Kentucky were set free from servitude through petition to the county court or by the last will and testament of the slave owner.  The document below shows that Isaac S. Coffield chose to free two slaves through a petition to the county court. This document was found in Box 5 of the Livingston County, Kentucky County Court Clerk's Papers.  It reads as follows:

"I Isaac Coffield do hereby emancipate and set from [sic] my two negroes slaves, To wit, Dick & his wife Cloe to be from thence foreward under their own free will and controul  given under my hand this 20th day of July 1818.   [signed] Isaac S. Coffield."

Isaac Coffield lived in the part of Livingston County that became Crittenden County in 1842. He died testate in 1843. It is curious that he freed two slaves in 1818, but when he died, almost 20 slaves were listed in his estate inventory.

Published 21 Mar 2013 on Western Kentucky Genealogy Blog, http://wkygenealogy.blogspot.com/
Posted by Brenda Joyce Jerome at 2:30 AM No comments: Links to this post 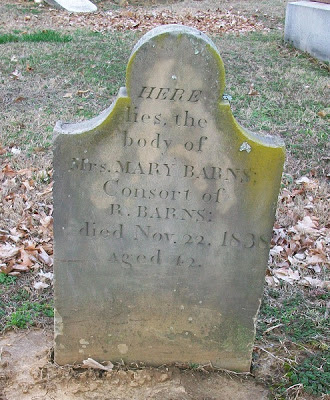 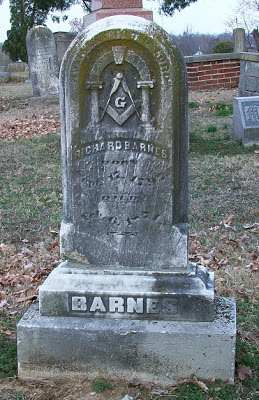 Richard Barnes
Born
Sept. 17, 1797
Died
Feb. 6, 1871
Buried Cedar Hill Cemetery, Princeton, Caldwell County, Kentucky. Tombstones photographed 18 March 2011.  The stone for Mary Barnes is more primitive and common for this area of Kentucky during the 1830s and 1840s while Richard Barnes' tombstone illustrates how the styles had evolved during the 30 plus years between their deaths.
On the 19th of October 1812, Richard Barnes was bound to Jacob Houts in Livingston County to learn the tanner's trade, Richard "being 15 years old the 17th day of September last." [County Court Order Book E:148]
Richard Barnes and Polly Wiley married 23 July 1818 in Livingston County, Kentucky. Richard Barnes and his family are found living in Princeton in 1820 and thereafter.
Published 19 March 2013, Western Kentucky Genealogy Blog,  http://wkygenealogy.blogspot.com/
﻿
﻿
Posted by Brenda Joyce Jerome at 3:00 AM No comments: Links to this post 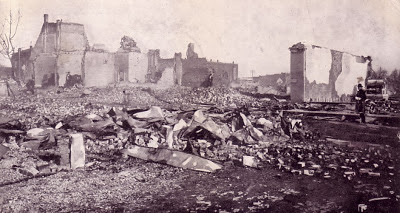 Marion, Kentucky the day after the great fire of 28 March 1905
During the early years of the 1900s, many business buildings in western Kentucky were still of wooden construction. Because of this, fire was always a concern. In Marion, Crittenden County, the entire business section was wiped out on 28 March 1905, resulting in a loss of $200,000. A similar disaster visited Marion again in 1919.
A disastrous fire struck Salem, Livingston County, as a result of boys shooting off Roman candles on the night of 17 December 1902. Suffering losses were J.D. Faris, dry goods; Vernon & Matlock, dry goods; John Eberly, grocery; Dock Grassham, blacksmith and Jesse Faris, liveryman.﻿

On 6 July 1913, a large portion of Sturgis, Union County, with a population of about 2,500, was destroyed by fire, which started in a drug store early in the evening. The town had no water works and citizens fought the flames with a bucket brigade. By 11 p.m., virtually all of the business houses and 30 dwellings were in ashes and the fire was still raging. Loss was expected to exceed $250,000.

Mogranfield, Union County, seems to have suffered more than most towns during this era. On 19 January 1904, fires were set at several different parts of town. Young & Waller's warehouse and over 100 tons of hay were destroyed. At the depot, a boxcar containing several barrels of whiskey were burned about the same time. Later Frank Aton's blacksmith shop was burned and then Frank Sparks' blacksmith shop was destroyed. Frank Sellar's saloon caught fire, but was saved with slight loss. At an early hour on 9 April 1904, fire was discovered in a large brick building on Main street in Morganfield, Union County. The building was occupied by T.C. Day's grocery, J.W. Field's saloon and Podgett & Sales' saloon. All were destroyed. In March 1910, fire supposed to have been deliberately set destroyed the following businesses: Green River Department Store, Masonic Temple, the opera house and the Bank of Union County. This fire is said to have been started in the department store.

Published 14 March 2013, Western Kentucky Genealogy Blog, http://wkygenealogy.blogspot.com/
Posted by Brenda Joyce Jerome at 3:00 AM No comments: Links to this post 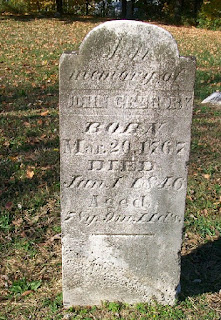 Published 12 March 2013, Western Kentucky Genealogy Blog,  http://wkygenealogy.blogspot.com/﻿
﻿
Posted by Brenda Joyce Jerome at 3:00 AM No comments: Links to this post

How often do you review your family files? Do you abandon a family when you run into a road block, never to return? I've found that a little time away from a family and then a return review often reveals clues I missed.  Keeping a log in each family file is a handy trick, too. The log shows the last time the file was checked, clues previously missed, if any,  and a plan of attack (i.e. research plan). Clues probably won't be found every time the file is reviewed, but it keeps the information fresh in my mind. 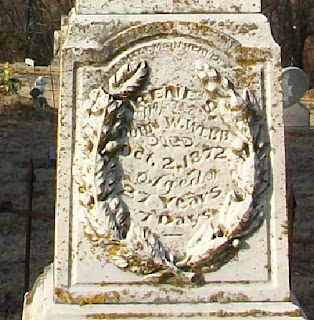 Since there are no extant newspapers prior to 1924 for Union County, Kentucky, it is always a treat to find obituaries and accounts of marriages in the newspapers of other towns. The following items appeared in the Evansville, Indiana Courier on Friday, 25 August 1916.

Morganfield, Ky., Aug. 24 - Miss George Ray and Mr. Solon West Dunn were quietly married at the home of the bride Tuesday morning. The bride was attractively attired in a brown taffeta suit with hat and shoes to match and white gloves. Mrs. Dunn has been a popular teacher in the graded school for several years, and after graduating from the high school here, attended Bowling Green Normal School. Mr. Dunn is a graduate of Bowling Green Business university and is now with the wholesale grocery firm of Davidson Bros. at Bowling Green. They left Tuesday morning for a northern trip. Rev. G.B. Swan of Sebree officiated using the ring service.

Mrs. Barbara Benson died at her home near Spring Grove Tuesday evening of cancer of the stomach, after an illness of several years. She was the widow of Dr. Willis Benson and leaves a niece and nephew whom she reared, Miss Ellen Ashby and Nurbon Jones. The funeral was preached by Rev. G.S. Kennard of the Morganfield Baptist church at the home Wednesday and interment was at Pike's Peak cemetery.

Published 3 March 2013, Western Kentucky Genealogy Blog, http://wkygenealogy.blogspot.com/
Posted by Brenda Joyce Jerome at 8:03 AM No comments: Links to this post