When I was compiling a book on Crittenden County estate records [1] several years ago, I came across an entry in Crittenden County Court Order Book[2] that stated Mary Postlethwait was appointed guardian for the infant heirs of Jonathan Postlethwait[3].  That was good information  as Jonathan Postlethwait left no will and there was no settlement of his estate.  There was no death certificate for Jonathan in 1858 or any other year so this entry in the court order book gave us an approximate death date.

Sometime later another record was found that provided much more information and had me doing a happy dance. Circuit Court case files are housed at the Kentucky Dept. for Libraries and Archives in Frankfort. Included among the Crittenden Circuit Court records was case file  #151, Mary Postlethwait: Petition for Sale of Land - also filed 26 October 1858. Coincidence?  Not at all. She was first appointed guardian to the children and then, as guardian, she filed the petition.

This case file contained several items of interest:
1.  It gave the death date of Jonathan Postlethwait.
2.  He said he died intestate (left no valid will).
3.  It identified the petitioners as his widow and his only children.
4.  He said he owned land in Crittenden County.
5.  It mentioned she planned to move from Kentucky and where.

Any one of those items would have been great to know, but knowing all of them was wonderful!

According to Mary, her late husband left very little personal property. The farms were in bad condition and the rent from them was insufficient to support and educate the petitioners. Mary Postlethwait stated her father and all her brothers had either already moved to Missouri or were planning to move there. She wanted to go to Missouri also as her father and brothers could assist her in raising her family and she could get more and better land there. She prayed for a decree to sell the above-mentioned land.

Samuel Ashley, who was likely Mary Postlethwait's father,  gave a deposition in which he stated he was well acquainted with the parties to this suit and also with the land to be sold. He verified that Mary Postlethwait was the widow of Jonathan and the children named were the only children of the decedent.

Mary and her children did leave Kentucky. It seems Mary, now known as Polly, had married Wm. Canalton and was living with him and her two youngest children, Susan and John on the 1860 Ray County, Missouri census.  Living next door was the family of Samuel Ashley.

I haven't followed Mary Postlethwait and all of her children, but do know that her daughter, Sarah E., married John Monfort and died in 1931. She is buried in Pisgah Cemetery in Ray County.  Sarah E. Monfort's brother, John Thomas Postlethwait, died in 1924 and is buried in St. Clair County, Missouri.

Samuel Ashley moved from Missouri to Colorado, where he died 7 October 1900 and is buried in Saguache County. His obituary states he was born 18 December 1817 Coffee County, Tennessee and moved to Kentucky at the age of 12 years. In 1858, he moved to Missouri and then to Colorado in 1865[4], when this was still Colorado Territory.

By putting all of the information together from the county court order book and the petition filed in Circuit Court, I have a much better picture of the Jonathan Postlethwait family. The information on Samuel Ashley was helpful, too.

Published 28 June 2016, Western Kentucky Genealogy Blog, http://wkygenealogy.blogspot.com/
Posted by Brenda Joyce Jerome at 4:00 AM No comments: Links to this post

Are  you researching the counties of Caldwell, Crittenden and Livingston in western Kentucky?  If so, several books on those counties are currently on sale.

Contact me before ordering to make sure the books are still available.

Published 27 June 2016, Western Kentucky Genealogy  Books.
Posted by Brenda Joyce Jerome at 10:10 AM No comments: Links to this post

1816 The Year Without a Summer

Fog dimmed the sunlight. Even wind and rain did not disperse the fog, causing crops to fail. This year became known as the Year Without a Summer or Eighteen Hundred and Froze to Death. The year was 1816, exactly 200 years ago.
The United States had gained their independence 40 years previous to 1816 and new states were being added often. The family of Abraham Lincoln moved from Kentucky to Spencer County, Indiana during the fall of 1816.  Did the family move because Indiana had just been admitted as the 19th U.S. state or was it to find better land?
Parts of the United States were still having killing frosts in July and August of 1816. Crops failed and food was in short supply in some areas.  The Chambersburgh (Pennsylvania) Repository  reported on 9 July 1816 that frost had been observed in several places. Other states reported snow still on mountain tops during the summer months.
Life continued, though, with farmers mortgaging their land and hoping for a better  year to come.  The Kentucky State Fair began in 1816 and Jubal Early, destined to become famous for his role in the Civil  War, was born in Virginia.  In western Kentucky, the counties of Crittenden, Trigg, Lyon and Webster had not yet been created and the area now known as the Jackson Purchase was still part of the Chickasaw lands.


What caused such a cold winter?  One possibility was a series of volcanic eruptions during the winter of 1815, in particular the eruption of Mt. Tambora in Indonesia. Ash from the volcano filled the air, preventing heat and light from the sun from reaching the earth. With no light or rain to nurture the soil, crops could not grow and a global cooling trend in the weather did not help.

Published 24 June 2016, Western Kentucky Genealogy Blog, http://wkygenealogy.blogspot.com/
Posted by Brenda Joyce Jerome at 3:30 AM No comments: Links to this post

The Short Life of Luvenia R. 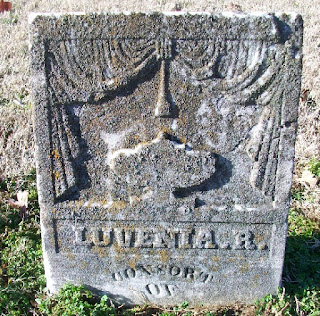 This intriguing tombstone can be found in Smithland Cemetery, Smithland, Kentucky. It was photographed 6 February 2013.

A little more of the tombstone was visible when Livingston County, Kentucky Cemeteries 1738 - 1976 was published in 1977 by the Livingston County Homemaker Clubs. On page 334 of this book it states as follows: "Smith, Lovenia R., consort of Abner, 9 Nov  ..."  The rest was below ground.  That was enough, however, to learn a bit about Luvenia/Lovenia and Abner Smith.

On 22 September 1841, Abner Smith married Lavinia Smith. Her father, W.B. Smith gave consent for the license to be issued.[1]  The 1850 Livingston County census shows Abner Smith, age 38; Leovinia Smith, age 36 and Drucilla Smith, age 2. All were listed as having been born in Tennessee. This may be an error, especially for Drucilla.

No death record for Luvenia Smith was found, but she must have died between when the census was taken in 1850 and when Abner married Elizabeth Harris on 11 August 1852.[3] Sometime before 1860, Abner Smith moved his family to Catahoula County, Louisiana. He was listed as a ship carpenter on that census.  Left behind were the graves of his first wife, Luvenia, and their child, Drucilla.

Published 21 June 2016, Western Kentucky Genealogy Blog, http://wkygenealogy.blogspot.com/
Posted by Brenda Joyce Jerome at 4:00 AM No comments: Links to this post

Unrecorded Will of T.T. Murphy

Less than a year before he died, Thomas T. Murphy wrote his will[1] and filed it with the Crittenden County Clerk.  For some unknown reason, the will was never probated or recorded. I came across this unrecorded will a number of years ago while working on Crittenden County, Kentucky  Wills Vol. 1  (1842 - 1924). Note that the will is in the handwriting of David Woods, County Clerk, but is signed in what is likely the handwriting of T.T. Murphy. 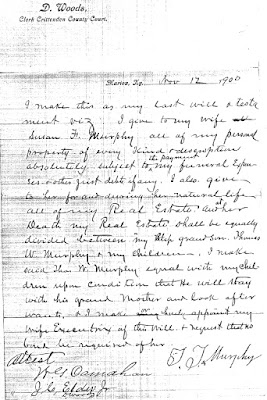 Unrecorded will of T.T. Murphy

The 1900 Crittenden County census shows Thomas T. Murphy and wife, Susan F. Murphy, along with Thomas W. Murphy living at 318 Poplar Street in Marion. Thomas T. and Susan F. had been married for 16 years.[2] His birthplace was listed as Virginia as were the birthplaces of both his parents.

T.T. Murphy had previously been married to Sarah A. Walsh (14 October 1844 in Todd County, Kentucky). He died 9 May 1901 and both he and his second wife, Susan F., are buried at Mapleview Cemetery in Marion.

Following his death, his obituary appeared in the local newspaper. [3]  "Mr. T.T. Murphy died at his home in Marion Thursday. He was buried with Masonic honors at the new cemetery Friday. He was born in Todd County 78 years ago, but has been a resident of Crittenden County for many years. He served in the Confederate army, making a good record as a soldier. He leaves three children  - two daughters who live in Todd County attended the funeral. The son lives in the west."

Recorded 15 June 2016, Western Kentucky Genealogy Blog, http://wkygenealogy.blogspot.com
Posted by Brenda Joyce Jerome at 3:30 AM No comments: Links to this post

Little is known about Steve Conkle. He appears on the 1870 Livingston County, Kentucky census as S. Conkle, age 28 and born in Pennsylvania. In his household are Lucy A., age 29 born Kentucky, John F., age 7 born Illinois and Josephine, age 1 born Kentucky. The 1880 census shows he has more children - Luella, age 11, Leeoder, age 5 and Henry, age 1.
He is buried in an abandoned cemetery near Smithland[1]  and his tombstone is a government-provided military monument reading "Co. A, 48 Illinois Infantry."  Steve Conkle enlisted 1 September 1861 at New Liberty, Illinois.[2] His birth place is given as Laurel Hill, Pennsylvania, his age as 23 and his description as dark hair, blue eyes and a light complexion. He was married when he enlisted. 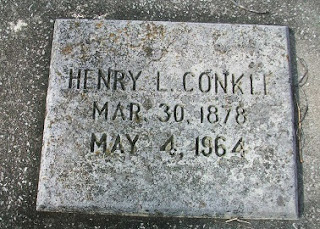 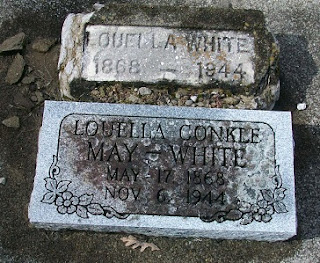 A search of the  Pennsylvania census records shows Steve Kunkle, age 14, on the 1850 Westmoreland County census. Also listed was Isaac Kunkle, age 18. Isaac migrated to Hardin County, Illinois and married Cassandra Smith, sister to my great-great-grandfather, Morgan Smith. I do not know if they moved to Illinois together, but while Isaac settled in Hardin County, Steve settled in neighboring Pope County, Illinois. He married Lucy Ann Whorton in Pope County on 28 February 1861.[3] Seven months later he enlisted in Co. A, 48th Illinois Infantry.

There are Conkle descendants today on both sides of the Ohio River.

Published 10 June 2016, Western Kentucky Genealogy Blog, http://wkygenealogy.blogspot.com/
Posted by Brenda Joyce Jerome at 3:30 AM No comments: Links to this post 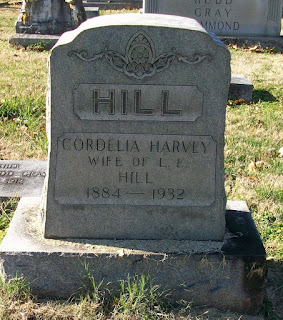 Cordelia A. Harvey married Lewis E. Hill in Brevard County, Florida 4 Jan 1914.[1] They appear on the 1920 census in Paducah, McCracken County, Kentucky and on the 1930 Caldwell County, Kentucky census.  The Hill family lived at 102 McNary Street in Princeton.  They had one known son, L.E., born ca 1919.

Lewis Edgar Hill was born in Smithland in 1885 and died 19 Mar 1951[2] in Christian County, Kentucky. He is buried in Riverside Cemetery, Hopkinsville.

Published 7 Jun 2016, Western Kentucky Genealogy Blog, http://wkygenealogy.blogspot.com/
Posted by Brenda Joyce Jerome at 4:00 AM No comments: Links to this post