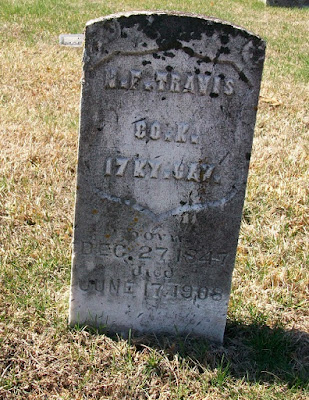 Marcus Travis and Miss Mary Lamb were married by W.C. Love at the home of Robartus Lamb 1 March 1868 in Crittenden County.[1]  They were married 40 years before Marcus' death.

During the last days of the Civil War, Marcus F. Travis enlisted in Co. K, 17 KY Cavalry (Union), which was organized at Russellville, Kentucky 25 April 1865 and was attached to the Military Dept. of Kentucky and assigned to duty at Hopkinsville. They were mustered out 20 September 1865.[2]


Published 31 May 2018, Western Kentucky Genealogy Blog, http://wkygenealogy.blogspot.com/
Posted by Brenda Joyce Jerome at 5:30 AM No comments: Links to this post 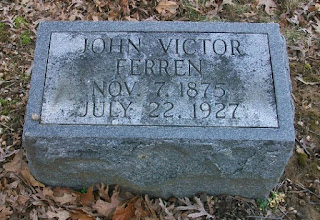 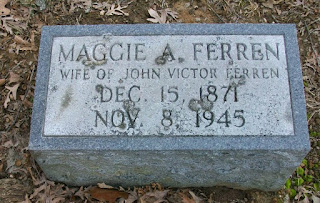 Although both died in Los Angeles, California, they are buried in Smithland Cemetery, Livingston County, Kentucky. Their tombstones were photographed 25 January 2015.

John Victor and his wife, Maggie Amanda Ferren, moved  to Paducah and are found on the 1910 McCracken County census, along with their daughter, Sevilla, age 10.[3]  By 1917, they had moved to Cochise County, Arizona, where they were listed on the City Directory in Bisbee.[4] They also appear on the 1920 Cochise County, Arizona census.[5]

The Ferren family moved to Los Angeles, California, where John V. Ferren died  22 July 1927. A short death notice mentions his death.[6] It states that Forrest Ferren received word that his father, John V. Ferren, had died in Los Angeles. Born in Livingston County, John V. Ferren had lived most of his life in Paducah and was to be buried in Smithland.

Maggie Amanda Ferren was the daughter of George D. Scott and Mary Evaline Jones,[7]  who had married in Livingston County 14 April 1867. [8]  After her husband died, she continued to live in Los Angeles, where she is found on the 1930 census. Living with her is her mother, Mary E. Scott, age 87.[9] 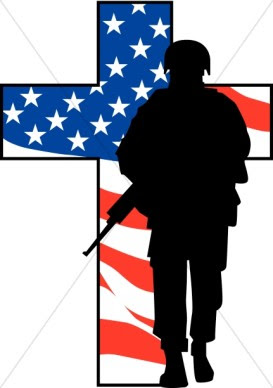 Published 28 May 2018, Western Kentucky Genealogy Blog, http://wkygenealogy.blogspot.com/
Posted by Brenda Joyce Jerome at 5:30 AM No comments: Links to this post

The small, plain monument marking his grave in Fernwood Cemetery gives no clue to the life - or death - of Harry Thomas. Born 28 December 1859 and died 30 October 1930 in Henderson, Kentucky.[1] His death certificate gives "heart trouble" as his cause of death, but the circumstances of his death are a bit  unusual.

Let's back up, though, and talk about the circumstances of his life.  Born in Illinois, he was the son of James N. Thomas and Lizzie Johnston.[2]  Harry Thomas had an artificial leg; he had it when he came to Henderson in 1898 from Chicago.  It is said he lost the leg when he fell under a train while working as a railroader. Engaged to be married, he sent his bride-to-be away, saying he didn't want her to be a nurse to him. He remained single the rest of his life. [3]

Harry Thomas opened a store at 236 N. Main Street in Henderson  and supported himself  buying and selling junk. He lived in the rear of his store and above his store lived the William Christ family, who looked out for Harry.

Harry Thomas was last seen on the streets several days before his death became known. When he had not checked in with the Christ family, they began a search for him. One of the Christ daughters looked out an upstairs window in the rear of the building and saw his artificial leg protruding out the back door into the alley. Friends were called to retrieve his body, but it was too late to save him.

It is supposed he fell and "his head had struck hard upon the floor.  A mass of blood surrounded his head."[4]  The coroner was called to the scene and "in examining the body discovered three diamond rings, several pearl stick pins and money amounting to $36 in his pockets. The valuables were placed in a vault in a local bank."[5]

Harry Thomas was an interesting man.  Periodically, he would embark on a trip to a far-off land.  When he was ready to leave, he would tell Mrs. Christ and give her the keys to his store.   When he ran short of money in his travels, "he would take off his wooden leg, hobble to a corner in whatever city or country he might be and count the coins as they fell into his hat. He would collect enough for another hop, and then again stop to collect more coins."[6] Harry's last trip was after the  world war (World War I), when he went to China, the land that he loved.

There was a bit of mystery surrounding Harry Thomas. He is gone now and he carried to the graves the secrets of his life and his travels.

Published 24 May 2018, Western Kentucky Genealogy Blog, http://wkygenealogy.blogspot.com/
Posted by Brenda Joyce Jerome at 5:00 AM No comments: Links to this post 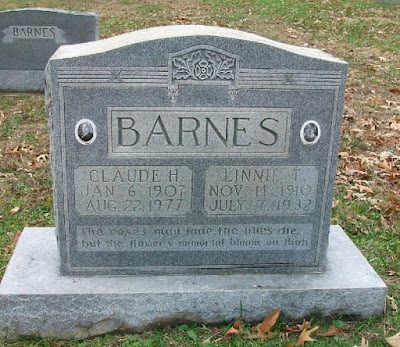 The roses may fade, the lilies die,
but the flowers immortal bloom on High

In 1920, Claude Barnes was enumerated in the household of his parents, Pat H. and Mamie Barnes.[1]  Linnie T. is living nearby with her parents.[2]

According to her death certificate, Linnie was born near Birdsville, Kentucky and was the daughter of Gus Henry, who was born at Birdsville, and Myrtle Harris, born in Hopkins County, Kentucky. [3] She died of tuberculosis.

After Linnie's death, Claude went to Detroit, where he worked as a die setter and was a lodger, along with James A. Barnes and Margaret Barnes, on Baker Street. [4]   On 10 May 1941, Claude married Emma Hargis Elkins in Henry County, Ohio. He was listed as born in Kentucky, lived Detroit and was a widower.[5]

Claude H. Barnes  died in Paducah at the age of 70 years. According to his obituary, he was survived by a sister and a brother. Services were held at Smith Funeral Home Chapel and burial was in Ferguson Cemetery, near Smithland. He was a member of Wolverine Masonic Lodge No. 484 F&AM in Detroit.[6]

Recently I came across a scrap of paper among the Livingston County, Kentucky County Clerk's Papers. It intrigued me. Who was the father of Mary T. Mc Carroll and what happened to her?  It didn't take long to start the journey of learning about this five year old child. 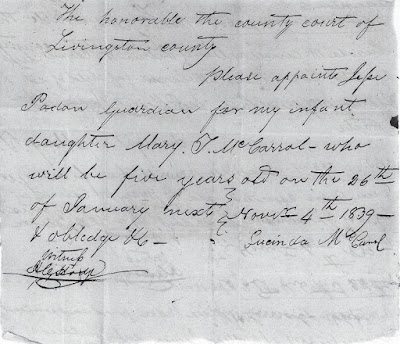 Andrew McCarroll died before 20 March 1836 and Lucinda, as the widow, renounced  her rights to administer on her late husband's estate in favor of Jesse Padon, who was the county sheriff. [2] Padon was also appointed guardian to the McCarroll child, Mary T.[3] After Padon died in 1840,[4] Lucinda was appointed guardian to Mary T. McCarroll.[5]

On the 4th of April 1843, Mrs. Lucinda McCarroll, widow, married David B. Glenn in Livingston County[6] and they moved to neighboring  Caldwell County. [7] Lucinda's daughter, Mary, was enumerated in the Glenn household.

Apparently Mary T. McCarroll Dorroh died before 28 October 1868 as on that date he married Mrs. Esther J. Hill in Crittenden County, Kentucky.[12] Did Mary T. die in childbirth?  Perhaps. I didn't learn everything I wanted to know about her, but I do know she was part of a family and even married and had children of her own. It makes me sad, though, that she died without seeing any of her children married or with children of their own. 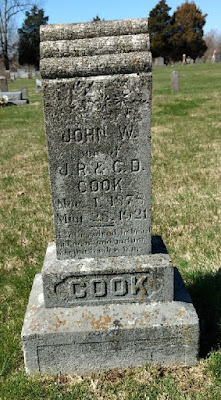 John William Cook was the son of Joseph R. Cook and Caldonia Burton, both of whom were born in Crittenden County. [1] He is listed on the 1900 Crittenden County census with his wife, Ida M., and son, Eddie O. Cook. John W. and Ida M. Cook had been married two years.[2]

In 1917, John W. Cook applied for the military draft and gave the following information: He was born 1 November 1878; was employed by the Wasson Coal Co. in Wasson, Saline County, Illinois and his nearest relative was Ida Mae Cook.[3]


Ending the week on a positive note with a shiny new award for one of  Feedspot's Top 100 Genealogy Blogs.  I am honored.

Published 11 May 2018, Western Kentucky Genealogy Blog, http://wkygenealogy.blogspot.com/
Posted by Brenda Joyce Jerome at 9:46 AM 6 comments: Links to this post

It is often hard to locate a person between 1880 and 1900  due to the lack of a complete 1890 federal census. Therefore, any record that places a person in a particular place during this time period  is valuable.

Smithland Lodge, No. 138, met at Smithland, Livingston County, on the first Monday of each month. The following information has been transcribed from Proceedings of the Grand Lodge of Kentucky, F. and A.M.,  Ninety-Third Annual Communication, held in Louisville, Kentucky commencing Oct. 18 and 19, 1892, available on Google Books, accessed 5 January 2018.

Published 11 May 2018, Western Kentucky Genealogy Blog, http://wkygenealogy.blogspot.com/
Posted by Brenda Joyce Jerome at 5:00 AM No comments: Links to this post 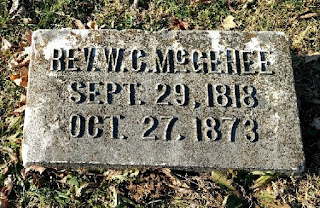 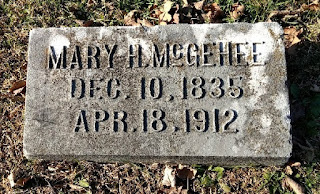 The Rev. William C. McGehee and Miss Mary H. Dudley were married 22 August 1853 by S.N. Davis, Cumberland Presbyterian minister, at the home of M. Dudley. The bridegroom was born in Louisa County, Virginia and his bride was born in Princeton. [1]

The McGehee family was living in Todd County, Kentucky in 1860[2] and, by 1870, they were living in Princeton again.[3]  The Rev. McGehee wrote his will on the same day he died and it was recorded 16 December 1873.[4] He mentioned his wife, Mary H. McGehee, and "our children," but does not name them.

By 1900, Mary H. McGehee had moved to Knoxville, Knox County, Tennessee.[5] Ten years later she was living in the home of her daughter, Annie McGehee Dooley, in Knoxville.[6]

According to Death Certificate #5214, Mary H. McGehee was the daughter of Milton B. Dudley and Eliza Harpending and was born in Kentucky.[7] 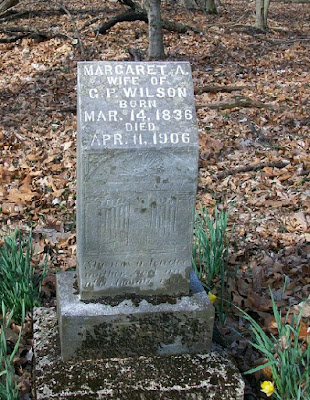 "Sister Wilson professed religion when quite young and joined the Methodist church in 1853. She was of  cheerful disposition, and was an earnest, faithful worker in the church, and as a result of this faithful life many were induced to give up sin and turn to God.

"She leaves a husband, three sons and three daughters to mourn their loss. Two sons preceded her to the sun-bright clime above. Aunt Mag, as she was familiarly called, will be greatly missed. I preached her funeral at the residence where she had lived so long and we laid her away in the family cemetery near by, which she had already adorned with flowers, to await the resurrection at the last day."  [signed]  R.C. Love.[1]

The flowers in the cemetery planted by Margaret A. Wilson are still visible in the photograph above. We first located this cemetery in the early 1990s and several years later we used the flowers to guide us to the cemetery. The photograph below was made during a visit in the 1990s. 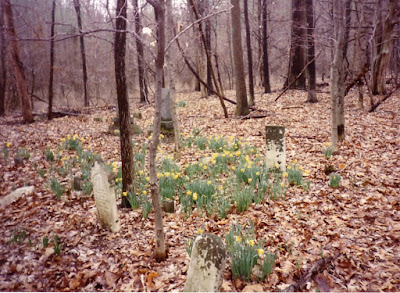