In 1835, Bethany Presbyterian Church moved from the current location of Crooked Creek Missionary Baptist Church, about 1 mile from Marion, Crittenden County to where U.S. 60 makes a 90 degree turn as it heads toward Livingston County. The church is long gone, but the adjoining cemetery, called Old Marion, remains as the final resting place for some of Marion's earliest settlers. Crittenden County was created in 1842 and Marion became the county seat not long after that.

Among the older tombstones in Old Marion Cemetery are those for George and Martha Witherspoon, who came from North Carolina at an early date. The Membership List of Bethany-Marion Presbyterian Church 1803-1881, compiled from the official record book by Robert M. Wheeler, lists George Witherspoon as a charter Elder in 1813 and Martha Witherspoon as a charter member. George's death date is listed as 3/16/1844 and Martha's death date is given as 11/19/1845. George Witherspoon left a will dated 3 February 1840 and recorded 13 May 1844 in Crittenden County Will Book 1, page 6.  Unfortunately, a tree has tried to eat the tombstone for George Witherspoon so we are unable to read any anything but his last name and March 16.  The tombstones were photographed 24 October 2012. 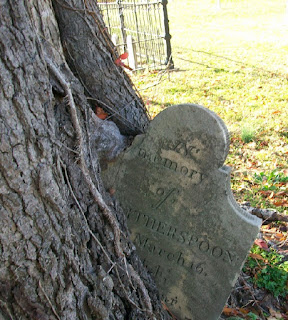 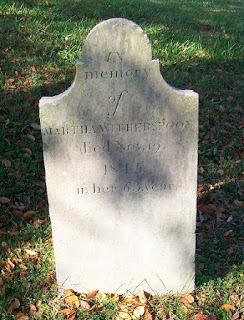 In
memory
of
Martha Witherspoon
died Nov. 19
1845
in her 63 year
Posted by Brenda Joyce Jerome at 3:00 AM No comments: Links to this post

Kentucky marriage laws were very specific about who could and could not marry. These laws also detailed who could perform marriages and how the marriage records were to be issued.     This information in this post is taken from  The Revised Statutes of Kentucky, approved and adopted by the General Assembly 1851 and 1852, and in force from July 1, 1852, Vol. II, Chapter 47.


Marriage was prohibited with an idiot or lunatic or between a white person and a Negro or Mulatto, either as a slave or free. Marriage was not permitted with a person not legally divorced with a privilege of remarrying.  A marriage was to be solemnized in the presence of a person authorized to do so.


Marriages could be solemnized by ministers of the gospel or priests of any denomination in regular communion with any religious society. Also, judges of the county court and justices of the peace were authorized to perform marriages.  No minister or priest could solemnize a marriage until he had obtained a license from the county court of the county where he resided. The person solemnizing the marriage had to return the license to the clerk of county court within three months, with a certificate of the marriage over his signature, giving the date and place of the marriage and the names of 2-3 people present. Failing to make this return was to result in a $60 fine.


No marriage could be solemnized without a license issued by the clerk of the county court. "It shall only issue from the clerk of the county court where the female usually resides, unless she is of full age or a widow, and it is issued on her own application in person or by writing signed by her."  Although if a license was issued from a county clerk of another county , where the bride resided, the marriage would not be considered invalid.


Marriage was prohibited when the male was under the age of 14 or the female was under 12 years of age.  It either of the party was under 21 years of age and never before married, no license could issue without the consent of his or her father or guardian, or if there was none or he was absent from the state, without the consent of his or her mother, along with the signatures of two witnesses. If the parties were not known to the county clerk, a license could not issue without bond and surety in the penalty of $100, to be given to the commonwealth with condition that there was no lawful cause to obstruct the marriage.

Harriet Cook, daughter of John and Ann Cook, first married John Davis before November 1822, probably in Kentucky.  Three known children were born to them: Thomas M. Davis, John N. Davis and William R. Davis. John Davis died before December 1830 in Livingston County and, in 1833, Harriet Cook Davis married Stephen Lyon. Harriet, her second husband, and several of her children are all buried near each other in Smithland Cemetery. 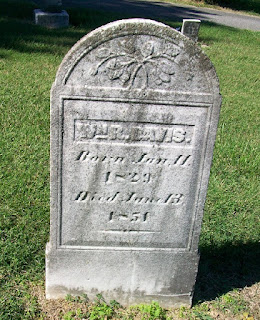 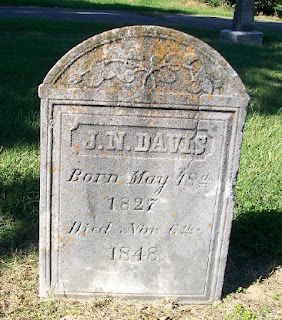 J.N. Davis
Born May 18th
1827
Died Nov. 6th
1848
﻿On 8 March 1852, Mrs. Harriet Lyon of Smithland conveyed to Thos. M. Davis all her interest in and to all the real estate of John Davis dec'd "which she fell heir to and was entitled according to the Laws of Kentucky upon the Death of her two sons, John N. & Wm. R. Davis brothers of sd. Thos. M. Davis & children of sd. John Davis dec'd." [Livingston County Deed Book 1:539]
Harriet had several children by Stephen Lyon, but only one, Charles S. Lyon, lived to adulthood. He was born in 1837 and died 1912 in Western State Hospital. 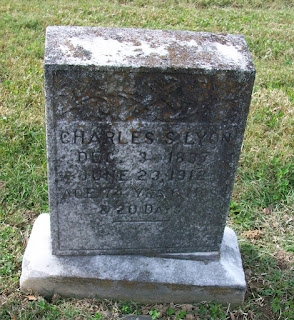 Many Kentucky researchers are convinced that some of their genealogical problems would be solved if only the 1890 federal census existed. Unfortunately, 99% of the records for that census were destroyed in 1921 in a Department of Commerce fire in Washington, DC.  Only slightly more than 6,100 records survived and none of them are for Kentucky.  There are a few 1890 Veteran Schedules extant for some Kentucky counties, but those counties do not include Henderson, Caldwell, Crittenden, Livingston, Lyon, Hopkins, Union or Webster. Also, there are no state census records for Kentucky.

The 1890 tax lists for many Kentucky counties do exist, however. Some larger libraries may have them on microfilm and they are certainly available at the Kentucky Department for Libraries and Archives in Frankfort, Kentucky. Also, some of these tax lists for that year have been published (i.e. Caldwell County) as a "substitute 1890 census."  The 1890 tax list provides important information, such as amount of land owned and the value, number of males over the age of 21, number of legal voters, number of children between the ages of 6 and 20 and even the name of the nearest neighbor, but only the person being taxed  and the neighbor are listed by name. Other members of the household are not listed.

It is inconvenient not having the 1890 census, but there are other places to find information. Be sure to look at wills and estate records, marriages, deeds and mortgages and court records and don't forget to look for newspapers.

Walter Burns first appears on the 1840 Livingston County, Kentucky census as a single man between the ages of 20 and 30. On the 30th of December 1840, he married Miss Evalina Petty. Before his death in 1849, Walter Burns served as county jailer and as paymaster of the 24th Regiment, 19th Brigade.

It is believed that Walter and Evalina had the following children: James Walter, Charles H., Isabella and Agnes. 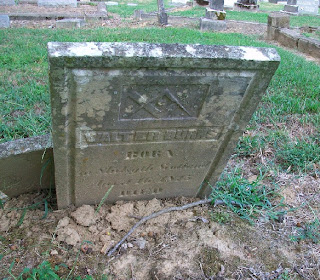 Walter Burns
Born
in Kilsyth, Scotland
April 16, 1815
Died
July 9, 1849
Buried Smithland Cemetery, Smithland, Kentucky. The tombstone above was photographed in 2010. During the summer of 2012, someone wedged a piece of wood in front of the stone, perhaps in an attempt to straighten it. As a result, the tombstone broke at ground level. 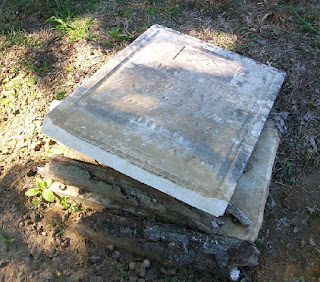 Evalina Petty Burns married as her second husband, James E. Smullen on 25 March 1856 in Livingston County. At the time of that marriage, she was listed as age 38, widowed, born Christian County, Kentucky and a resident of Smithland. She died after 1880, probably in Livingston County.
﻿
﻿
Posted by Brenda Joyce Jerome at 3:00 AM 2 comments: Links to this post

Genealogists search many records to find information on their ancestors. Because they are not as easily accessible, business directories and registers are often overlooked. Google Books has made it easier to locate these records.  The following information on lawyers comes from  Lawyers' Record and Official Register of the United States, 1872. 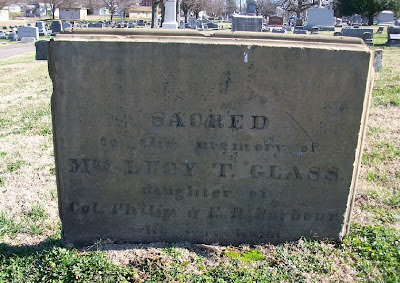 Sacred
to the memory of
Mrs. Lucy T. Glass
daughter of
Col. Philip & E.H. Barbour
who was born
[remainder of inscription under ground]

The Fernwood Cemetery Database gives her burial date as 19 July 1841.

According to Raleigh Travers Green's Genealogical and Historical Notes on Culpeper County, Virginia, Philip Barbour, a veteran of the War of 1812, married as his second wife, Elizabeth Hopkins, daughter of Samuel Hopkins.

On the 6th day of October 2007 I spoke my first words as a blogger. Little did I realize that over 860 posts would be published here and over 128,000 people would visit this site.

The post with the most hits since this blog began is the one on Andrew Jackson's tombstone.  During the past month, the most popular posts have been the following:

Am I My Own Cousin?


Many subjects have been covered, but there is still much to say so ... I guess I'll hang around for a while. Thank you for joining me and I hope you will continue to do so.


Posted by Brenda Joyce Jerome at 2:30 AM 2 comments: Links to this post

23rd January 1858: Indenture between Nancy F. Woodsides of St. Clair County, Illinois and Samuel H. Elder of Crittenden County, Kentucky. Whereas some years ago, say about the 11th day of March 1834, John Woodsides deceased then the husband of the sd. Nancy Woodsides sold a tract of land to David Stephenson, containing three[?] hundred and twenty seven acres which conveyance was made and acknowledged before the clerk about the time above mentioned and same day that David Stephenson sold a part of the land to S.H. Elder for $229. And whereas Nancy F. Woodsides did not sign sd. conveyance to Stephenson and relinquish her dower ... now to perfect Elder's title and for the consideration of one dollar, Nancy relinquishes all her right to dower in and to sd. land. [signed] Nancy F. (X her mark) Woodsides. Recorded in Crittenden County 3 February 1858. 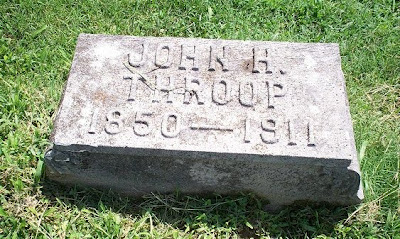 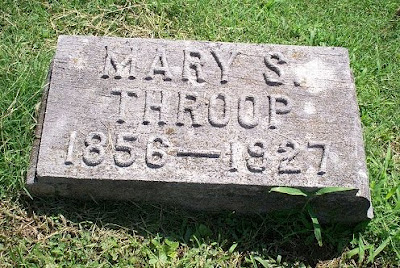 J.H. Throop's obituary appeared in the Crittenden Record Press 7 September 1911. It states: "Capt. J.H. Throop, aged 63 years, one of the best known steamboat men along the lower Ohio river, died here [Evansville] yesterday. For many years he was United States inspector of steamboat hulls here. He was a native of Smithland, Ky. The deceased had spent practically all his life on the Ohio River."

Posted by Brenda Joyce Jerome at 2:21 AM No comments: Links to this post