The Lamb Family Reunion is scheduled for Saturday, 12 October 2013, in Caldwell County, Kentucky. The day begins with the dedication of a new marker for John and Mary Clayton Lamb at the Lamb Cemetery in Scottsburg, just outside Princeton.  Following the ceremony, the group will gather at the Princeton Tourist Welcome Center, 201 E. Main Street, for lunch. Also, I will be present a program on "Epitaphs."

Reservations for the lunch are due 1 October 2013. If you have questions, contact Linda Lamb Monticelli at rlmlfm@aol.com or Matthew T. Patton at matthewtpatton@yahoo.com.

Pre-reunion events include Exploring the George Coon Public Library and the Glenn E. Martin Genealogy Library, 114 S. Harrison Street in Princeton, on Friday, 11 October 2013 from 12:30 - 2:30 pm. The library visit will be followed by Insider Tips on researching Caldwell County Court Records at the county clerk's office in the courthouse at 100 E. Market Street in Princeton from 2:30 - 4:00 pm.  The group will meet for dinner at Adams Breezy Hill Farm and Restaurant, 1222 Cadiz Road, Princeton at 5:15 pm.

Posted by Brenda Joyce Jerome at 4:18 PM No comments: Links to this post

What a treat it is to discover copies of old western Kentucky newspapers. The following obituary was found in the 2 December 1869 issue of the Henderson Reporter, at the Henderson County Public Library.

In the Life of Dr. Archibald Alexander, it is mentioned that at the early age of 17, he (Dr. A.) became tutor in the family of General Posey, who resided in the Wilderness, 12 miles west of Fredericksburg in the county of Spottsylvania, Virginia. [Quoting from this book], "Gen. Posey had done service to the Revolution as a commander of riflemen in Morgan's famous corps, in which he rose to be Colonel. Mrs. Posey had been a beauty in her youth, was now (1789) at the age of 40, a fine and stately person." These were the parents of Fayette Posey. It may be added that the father, Gen. Thomas Posey, afterward held the position of Governor of the North-western Territory.

Maj. Fayette Posey was born on the 24th day of October, A.D. 1784. Early in the present century, while yet a youth, he removed with the family to Kentucky and settled near what is now the town of Henderson ... and continued to reside until his death.

For 60 years he was a member and a large portion of that period, a ruling Elder in the Presbyterian Church. As a politician, he took the side of the Union in the late conflict ...

He died suddenly, while absent from home, on business connected with his estate, one son only of his family being present when the summons came. For many years he had been afflicted with a disease of the heart, and it was doubtless the messenger which God had commissioned to summon him to the eternal world. He complained of slight chilliness, sat down by the fire, resting his face on his hands and before those who stood near him were conscious of any danger, his spirit had fled.

And thus has passed away another of the fathers.

More than 60 years ago he was a student in Washington College, now under the Presidency of General Lee. He sat under the preaching of McGready, who, more than a quarter of a century ago, sunk into the grave.

Maj. Posey was twice married. His second wife - his companion and true helper through more than 40 years of his pilgrimage - five sons and two daughters, with other numerous descendants, survive him. 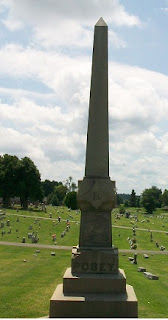 Published 26 September 2013, Western Kentucky Genealogy Blog,  http://wkygenealogy.blogspot.com/
Posted by Brenda Joyce Jerome at 3:00 AM No comments: Links to this post 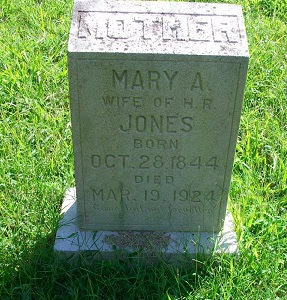 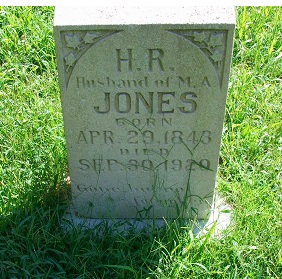 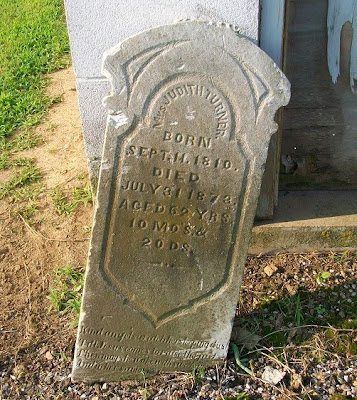 It all started when I spotted the tombstone of Mrs. Judith Martin leaning against a shed in Cedar Hill Cemetery in Princeton, Caldwell County, Kentucky. It looked to be perfect as the subject of Tombstone Tuesday for this blog. As usual, I did some research to learn a little about her. Who were her parents? Who did she marry? Did anything extraordinary happen during her life?

In 1889, Mrs. Agatha Rochester Strange published a little book, House of Rochester in Kentucky. Nathaniel Rochester and his children are listed, including a daughter, Amanda Malvina, by Judith Martin, but neither the marriage to Judith or the second child, James, is mentioned.

On 6 August 1851, Judith's father, Tilghman Martin, wrote his will. He left bequests to each of his children except Judith. Judith's children by Nathaniel Rochester did inherit from their grandfather. When Judith's brother, also named Tilghman, wrote his will in 1852, he specifically excluded Judith from inheriting from his estate. Apparently, there were hard feelings between Judith and her family.

The marriage of Judith and Mathew B. Turner apparently terminated, too. On the 1860 census Judith was living in the household of her brother, A.J. Martin, and Turner was living with his married daughter in Williamson County, Illinois.

So, when and where did Nathaniel and Judith (Martin) Rochester divorce and where were they living in 1840?  Did Judith Martin Rochester and Mathew B. Turner also divorce?  If so, where?  I have looked in Caldwell, Livingston and Crittenden counties and found no record of a divorce.  Crittenden County seemed the logical place to find records on Nathaniel as he died at the home of his son, William H. Rochester, in Marion in 1874, but, so far, I have not found anything there. Do you have any ideas?

Published 19 September 2013, Western Kentucky Genealogy Blog,  http://wkygenealogy.blogspot.com/
Posted by Brenda Joyce Jerome at 3:00 AM No comments: Links to this post 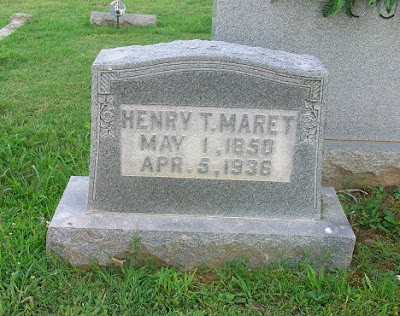 Henry T. Maret
May 1, 1850
Apr. 5, 1936
Buried Cedar Hill Cemetery, Princeton, Caldwell County, Kentucky. Tombstone photographed 21 June 2013.
According to his obituary in the obituary files of Glenn E. Martin Genealogy Library, Henry. Timberlake Maret was born in Paris, France. He came to America with his parents when he was a child and later became a naturalized citizen. His death certificate lists his father's name as Lewis Maret.
Published 17 September 2013, Western Kentucky Genealogy Blog, http://wkygenealogy.blogspot.com/
﻿
Posted by Brenda Joyce Jerome at 3:30 AM No comments: Links to this post

Lori Thornton, a professional genealogist specializing in Southern states and religious records research, will present four programs tomorrow, September 14, 2013, at a free, all-day workshop at Willard Library, 21 First Avenue, Evansville, Indiana. The programs to be presented are as follows:

Published 13 September 2013, Western Kentucky Genealogy Blog, http://wkygenealogy.blogspot.com/
Posted by Brenda Joyce Jerome at 7:25 AM No comments: Links to this post

The following information is taken from Proceedings of the Grand Lodge of Kentucky, 1867, as accessed on Google Books. 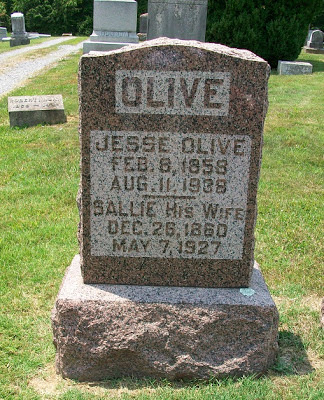 There have been many dark days in Kentucky history. Some of those days even lasted for decades. I'm referring to the times when local men, called paddy rollers or patty rollers, patrolled the streets and back roads of his county. Some paddy rollers took their duties to an extreme, earning them a reputation for being ruthless and cruel.

Patrollers have a long history in Kentucky. An Act directing the County Court to appoint patrollers goes back to late 1799, according to A Digest of the Statute Laws of Kentucky, Vol. II, 1834. The Act states that county courts should lay off districts within the counties and each district was to appoint a company of patrollers to serve 12 months. Each company consisted of a captain of the patrol and several to serve under his direction.

The function of these patrollers was to patrol within the assigned bounds in their county, "and visit negro quarters and other suspected places of unlawful assemblies of slaves. And any slave found at such assembly, or who shall be found strolling about from one plantation to another, without a pass from his or her master, mistress, or overseer, shall receive any number of lashes on his or her bare back, at the discretion of the captain of the patrol ... not exceeding ten."  It is no wonder slaves feared the patrollers.

In 1841, the Act regarding patrollers was amended. It now stated the following: "That, for ever fugitive slave which sd. patrol may apprehend and deliver to the owner, or secure in jail so that the owner gets him or her, if from the same county where the patrol is established, twenty five dollars, if from any other county, fifty dollars; which the owner or owners of such fugitive slave shall be bound to pay, upon the delivery of said fugitive slave, to person delivering the same, for the use and benefit of said patrol." At this time, only men who were at least 25 years old and were "housekeepers" within the county could be appointed a patroller.

Below is a document showing the appointment of a company of patrollers in Livingston County, Kentucky in 1805. 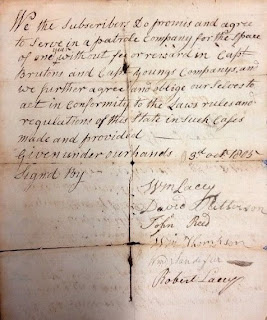 We the subscribers Do promise and agree to serve in a patrole company for the space of one year without fee or [illegible] in Capt. Brutons and Capt. Youngs  company and we further agree and oblige our Selves to act in conformity to the Laws rules and regulations of this State in such cases made and provided   Given under our hands  3 Oct 1805   Signed by   Wm. Lacy, David Patterson, John Reed, Wm. Thompson, Wm. Sandefur, Robert Lacey﻿

Published 5 September 2013, Western Kentucky Genealogy Blog, http://wkygenealogy.blogspot.com/
Posted by Brenda Joyce Jerome at 3:30 AM No comments: Links to this post

Buried side by side in Smithland Cemetery, Smithland, Kentucky, are Howard Hudnall and his wife, Jane Driskill.. The tombstones were photographed 2 October 2010. 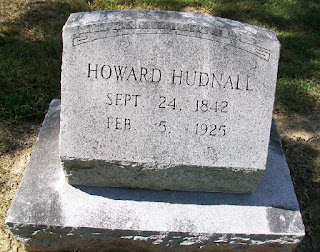 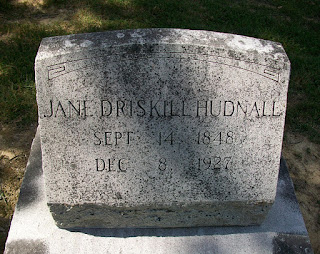