Never Too Old To Marry

Newspapers are full of wonderful stories. The following article is just one example. It appeared in the Evansville, Indiana Courier on Thursday, 22 February 1900 and was then reprinted in the Crittenden Press.


Met By Correspondence
Martin Gahagen of Weston, Ky. [Crittenden County], and Miss Amelia Sabin of Coldwater, Mich. were married in Evansville Wednesday. The wedding was the result of correspondence. The bride and groom never knew one another until they met in this city.
The groom is a well known and prosperous farmer of Weston. He is in his 70th year and carried himself with a degree of erectness for one of that age. He was born in Armstrong county, Pennsylvania, and came from the sturdy Pennsylvania German stock. This is his third venture in the matrimonial field and he has a family of five children, all grown.
Mrs. Amelia Sabin, the bride, is a dressmaker and gives her age at 53 years. She is a lady who bears a determined expression on her countenance. Her face is beginning to become wrinkled, while silvery locks are displacing the jet black hair of a few years ago. Her eyes are penetrating and have not lost their girlhood lustre, while her figure robed in a blue traveling suit, made her an impressive bride for one of her age. This is her second marriage.
Mr. Gahagen, who is a well known farmer, read an advertisement in a matrimonial journal several weeks ago. It read: "I am a widow." He answered the advertisement and a courtship followed. The climax was marriage.
Immediately after the ceremony, Mr. and Mrs. Gahagen left for Weston, Ky., where they will reside in the future. The marriage ceremony took place at the Victoria hotel, at the corner of Main and Eighth streets.
Published 31 October 2013, Western Kentucky Genealogy Blog, http://wkygenealogy.blogspot.com/﻿
Posted by Brenda Joyce Jerome at 2:30 AM No comments: Links to this post 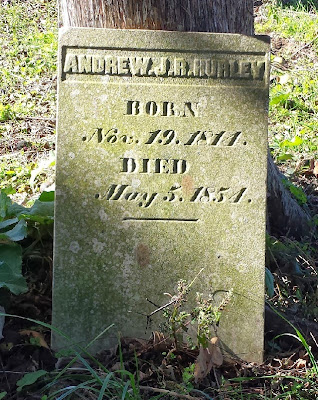 Old newspapers with wonderful obituaries rank high on my list of favorite things. Wonderful obituaries are the ones that give details of the decedent's life that you might not know from just searching public records. The following obituary for Mrs. Harriet Williamson  falls into the category of Wonderful. Although Mrs. Williamson lived in Cairo, Alexander County, Illinois, she was a former resident of Livingston County, Kentucky and, thus, her obituary appeared in the Paducah Sun on 9 February 1905.

Death At Cairo
Mrs. Harriet Williamson, Formerly of Smithland
Her Husband Formerly Owned the Boat Store at Cairo and was a Prominent Man

Cairo, Ill., Feb. 9 - Mrs. Harriet Williamson, aged 74 years, died yesterday afternoon at 5:15 o'clock at her home, 611 Washington avenue, after an illness of more than a year with a complication of diseases.

Mrs. Williamson was born in Hopkinsville, Ky., September 4, 1830. Her maiden name was  Wood. On October 7, 1845, she married John B. Smith, of Smithland, Ky. He died February 6, 1855. On May 11, 1856, she was united in marriage to Capt. G.D. Williamson at Smithland, where they resided until 1859 when he came to Cairo and established the boat store on Ohio street in partnership with the late E.P. Haynes. The latter retired from the business in the early 70s and Capt. Williamson conducted the business until his death in 1893. Mrs. Williamson came to Cairo in 1860.

A remarkable coincidence in the life of Mrs. Williamson and her second husband was that the first husband of the former died on the same day as the first wife of the latter. Funeral services were conducted over the remains of both in the old church at Smithland where they were both married. One sermon was preached over the remains of both and they were laid to rest in the same burial ground.

According to Kentucky Vital Statistics (Livingston County), 1855, John B. Smith, first husband of Harriet Wood Smith, died of consumption at the age of 32. The first wife of George D. Williamson was Mina McCawley, daughter of James McCawley of Smithland. She was age 29 when she died. John B. Smith has a tombstone in Smithland Cemetery, but Mina McCawley Williamson has no tombstone. 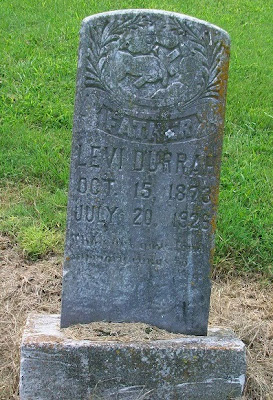 Father
Levi Durrah
Oct. 15, 1872
July 20, 1926
Buried in Smithland Cemetery, Smithland, Kentucky. Tombstone photographed 2 August 2013.
According to his death certificate, Levi Durrah, a "Negro," was a common laborer and the son of Nathan Durrah and Sarah Jones. Giving information for the death certificate was Carrie Webb, who was a sister to Levi Durrah. Marriage records show that Nathan Durrah and Sarah Jones married in Smithland  25 November 1869. Nathan was a deacon in the Colored Baptist Church in Smithland in 1880.
Levi Durrah enlisted for the draft for World War I. His birthdate on his draft enlistment is shown as 16 October 1874 and his nearest relative was Carrie Webb of Smithland.
The 1910 Livingston County, Kentucky census shows Levi Dure [sic] living in a household headed by his mother, Sarah.  By 1920, Levi was the head of household. Living with him were his brother, George, and Levi's son, Roy, age 12. According to the death certificate of Roy Durrah, his mother was Inez Holland.
Published 22 October 2013, Western Kentucky Genealogy Blog,  http://wkygenealogy.blogspot.com/ ﻿
Posted by Brenda Joyce Jerome at 3:30 AM No comments: Links to this post

The descendants of Longshore Lamb,  Revolutionary War soldier who served from South Carolina, met in Princeton, Caldwell County, Kentucky, for a reunion on 11-12 October 2013. The highlight of this gathering was the dedication of a memorial marker for John Lamb Sr. (1793-1865) and his wife, Mary Clayton Lamb (1797-1864) on land once owned by the Lamb family in the Scottsville community.  In addition, a new marker designating the Lamb Cemetery was also unveiled. The impressive ceremony was preceded by musical selections on a bagpipe. 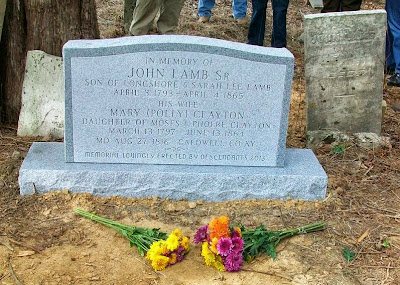 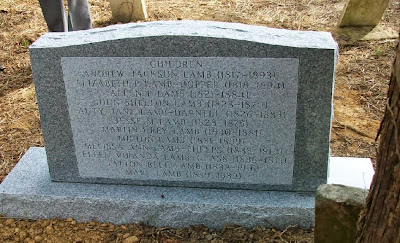 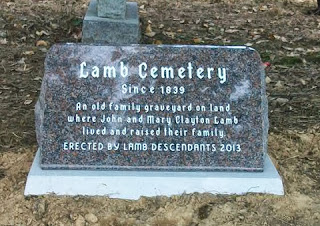 Grandma said Grandpa was part Indian. He must have been, she said, as he looked like an Indian. Auntie said Grandpa's ancestor was Cherokee, after all Grandma said he was Indian and the Cherokees came through this area of Kentucky on the Trail of Tears. Uncle said Grandpa "fell away" from the Trail of Tears and stayed in Kentucky. Otherwise he would have gone on with the rest of the Cherokees. Dad said he didn't care if Grandpa was Indian or not. He was tired of hearing about it and changed the subject.

So, was Grandpa of Native American descent or not? How much faith do you put in family stories? What do you believe and what do you discard? And finally, where do you look for Indian records in Kentucky?

Family legends, traditions and stories are fun, but they don't have to be true to be fun. Sometimes they are so preposterous that we are sure they are not true. But what about the stories that could be true.

The only way to find out if those stories are true is to follow that old path from the known to the unknown. Start with what you know and work backwards using vital records, census, and every other record available in the courthouse.

I've been researching Kentucky records for a long time and have never seen a box of documents (or even a single document) or a big book marked "Indian Records" in the courthouse. Except for separate books for African American marriages, all other records are found together with no label of color or ethnicity.

So, record those legends, traditions and family stories and be sure to write down the date you heard them and the name of the storyteller. Then get busy researching to determine if they are true or not. 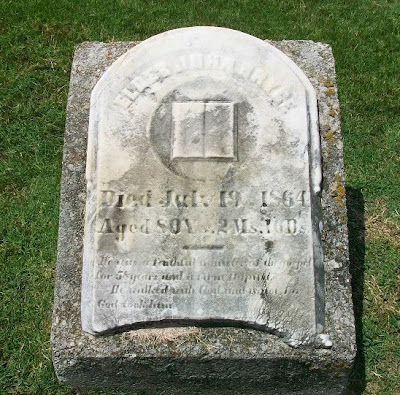 I had never heard of Shelton High School in Smithland, Kentucky before I read of its incorporation in Acts of the General Assembly of the Commonwealth of Kentucky, Chapter 255, in 1869.  This high school predates Livingston Central High School, which opened in 1916, according to Livingston County, Kentucky History and Families 1796-1990.  The following deed is found in Livingston County Deed Book 7, page 488, dated 10 February 1870:

"Whereas by an Act of the General Assembly approved March 1st 1869, all right & title of the state of Kentucky in and to the property in Smithland known as Cumberland Hospital was released to the corporate authorities of the town of Smithland to be held and used for the sole and exclusive purpose of carrying on a High School in sd. Town. And whereas by another act approved Feb. 3rd 1870 incorporating Shelton High School it is enacted that upon the presentation to the corporate authorities of the Town of Smithland of a petition signed by a majority of the voters of sd. Town it shall be their duty to convey to the Trustees of Shelton High School the building in Smithland known as Cumberland Hospital together with all the lands, assets and other property belonging thereto. And whereas a petition praying the conveyance be made ... Now in consideration of the premises and $1 we W. Beverly, Police Judge, and T.C. Leech, W.M. Gray and J.S. Leffler, Trustees of the Town of Smithland, do convey unto R.A. Clopton, James M. Cade, A.A. Grayott, W.M. Gray, S.H. Piles, T.C. Leech and I.T. Handlin, Trustees of Shelton High School and their successors, a piece of ground in Smithland containing 1 acre and is part of out lot #3."

I do not know if Shelton High School ever opened and if it did, how long it was open. Sometime previous to 1836, out lot #3 was divided into three portions, with one portion being where Cumberland Hospital was located. This was the portion upon which Shelton High School was to be situated. Today Smith Funeral Home is located on part of out lot #3. 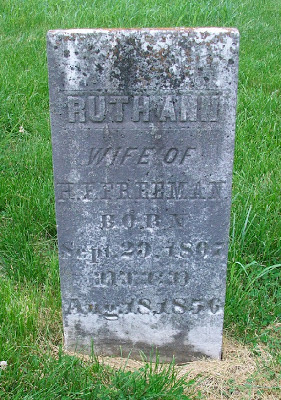 I want to share some numbers with you:  6 and 970.  What is the significance of those two numbers?  6 years ago on the 6th of October 2007, the first Western Kentucky Genealogy Blog post appeared.  Since that date, there have been 970 posts. That translates to a lot of time spent in front of this computer and even more time searching for material. This blog is truly a labor of love because the financial return isn't so great (Translation:  $0).

So, thanks for joining me here. I plan to continue the blog for some time and hope you will join me. If you have any suggestions on how to improve the blog or the type of material you would like to see, please let me know.

Published 3 October 2013, Western Kentucky Genealogy Blog, http://wkygenealogy.blogspot.com/
Posted by Brenda Joyce Jerome at 3:00 AM No comments: Links to this post 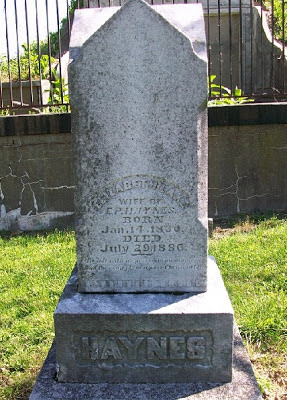