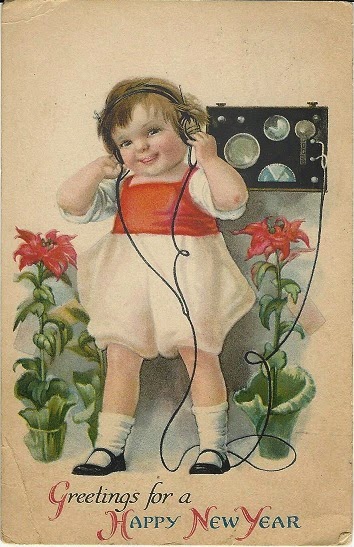 Wishing you peace, health and happiness in 2015! 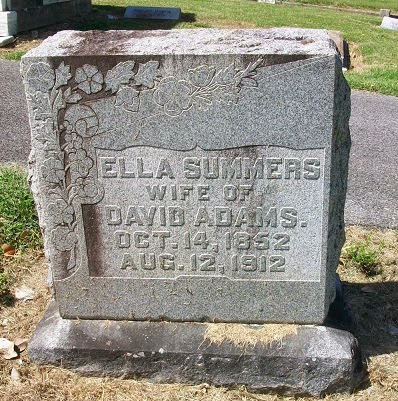 Ella Summers first appeared on the 1860 Livingston County, Kentucky census in the household of her parents, Joseph and Evelyn Summers. Her Kentucky death certificate (#20461) identifies her parents as George [sic] Summers and Evelyn Haines, both born in Kentucky.

Published 29 December 2014, Western Kentucky Genealogy Blog, http://wkygenealogy.blogspot.com/
Posted by Brenda Joyce Jerome at 4:00 AM No comments: Links to this post

Several books are on sale through January 2015. For the list of books, go here: Winter Book Sale

Published 27 December 2014, Western Kentucky Genealogy Blog, http://wkygenealogy.blogspot.com/
Posted by Brenda Joyce Jerome at 4:00 AM No comments: Links to this post

Trying to improve my writing and research skills while writing this blog is always a challenge. It isn't easy trying to determine the subject of the next blog.  Maybe taking a look at the posts with the highest number of hits will show why those posts were of interest. This list pertains only to the blog posts during 2014.

The five posts with the highest number of hits during 2014 were as follows:

1.  He Married the Girl Who Brought the Eggs

5.  Cemeteries Here and There

Now, what do these posts have in common?  Not one thing. The last three all appeared in the month of September. Is that significant? I have no idea. The titles for #1 and #4 have catchy titles. Does that help? Maybe. The counties covered and the subject varies, but I have learned during the seven years of writing this blog that posts on the Civil War usually draw more hits. So, should I write about the Civil War during September and use a catchy title? 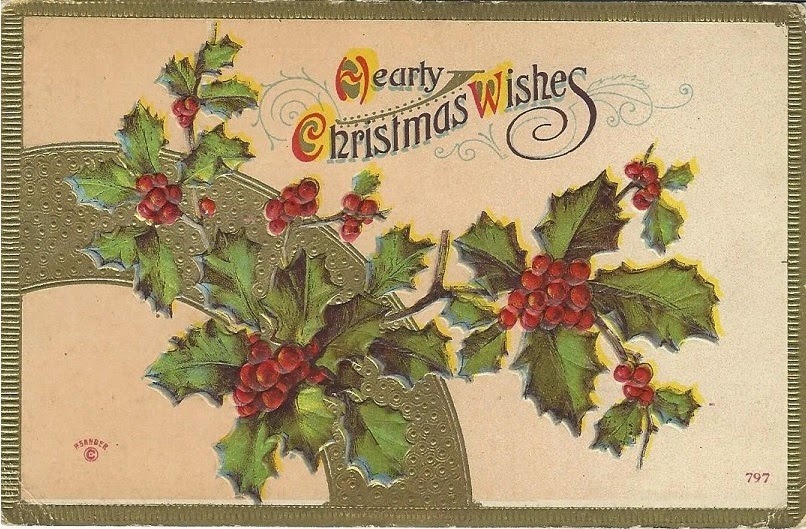 Wishing you a Merry Christmas filled
with the wonders of the season. 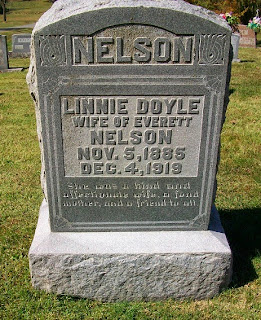 Linna E. Doyle, daughter, was living in the household of James W. and Ella F. Doyle in Dyers Hill District of Livingston County, Kentucky on the 1900 census.

Everette Lane Scyster Nelson, age two, died 13 October 1919 in Livingston County. He was the son of Everett Nelson and Linnie Doyle, according to his death certificate #28212 (1919).

Published 22 December 2014, Western Kentucky Genealogy Blog, http://wkygenealogy.blogspot.com/
Posted by Brenda Joyce Jerome at 3:30 AM No comments: Links to this post

When a person wrote his will, he usually named an executor to perform certain tasks after the testator had died. The executor's duties were to collect debts and credits due the estate, make a just and true accounting of his actions and deliver all legacies specified in the will.   The executor signed a bond to show that he would faithfully perform his duties. The following information comes from Livingston County, Kentucky Executors Bonds 1853 - 1916, a bound volume in the county clerk's office in Smithland. The date listed below is the date the bond was signed. 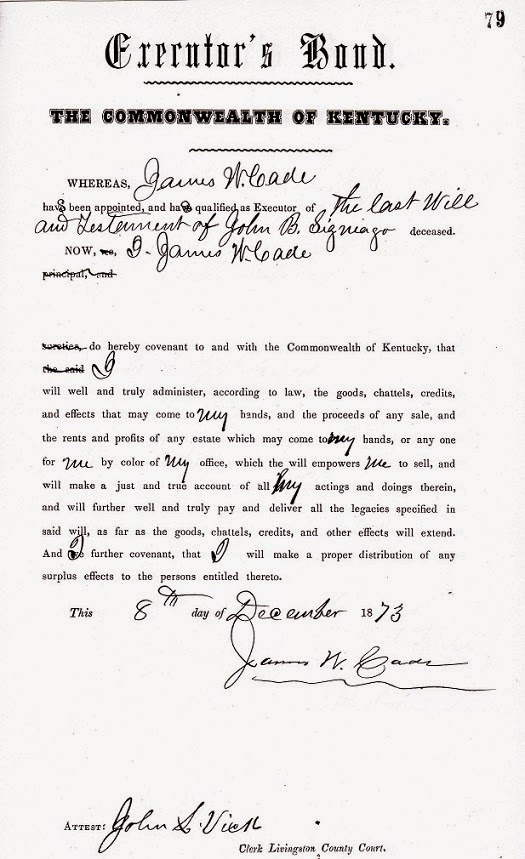 Bond Appointing James W. Cade
Executor of the last Will and Testament
of John B. Signiago 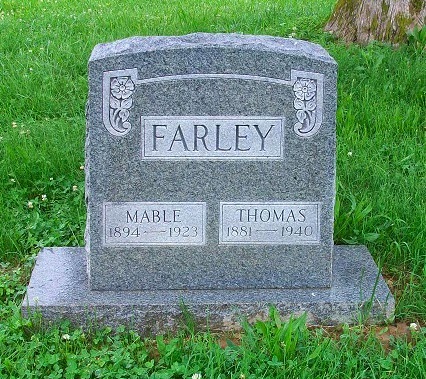 According to Kentucky death certificate #1119, Mable Agnes Gibson Farley was born in Indiana in 1894 to Clint Gibson and an unknown mother and died 17 December 1924. Thomas Farley's death certificate #9053 shows that he was born 1 May 1879 Crittenden County and died 18 April 1940 Princeton, Caldwell County, Kentucky. His parents are given as Gatesfield D. Farley and Sarah Elizabeth Tabor, both born in Kentucky.

Published 16 December 2014, Western Kentucky Genealogy Blog,  http://wkygenealogy.blogspot.com/
Posted by Brenda Joyce Jerome at 4:30 AM No comments: Links to this post 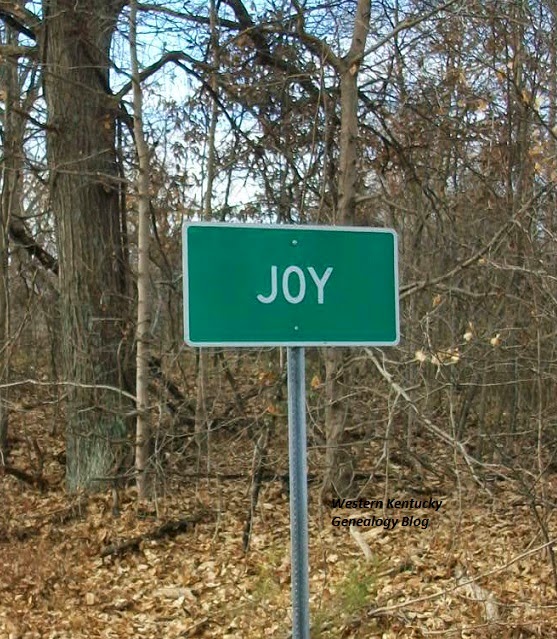 There is Joy in Livingston County, Kentucky.
It can be found near the junction of Highways 135 and 133.

Grandma  told the best stories about her family - especially the one about her grandfather, who was born well before that awful war that pitted neighbor against neighbor  and brother against brother. Later it became known as the War of Northern Aggression in the South and the Civil War in the North.

She told how Grandpa Jones' family lived on a big plantation with numerous slaves and lost everything due to the War.  She made the events sound as if they happened yesterday, but were those stories true?

Searching for the truth behind family stories means we check every possible record to find out what really happened. Do our results agree with the family stories?

I love family stories. They are fun and they give personality to people long deceased, but they often get embellished when told, retold, and told again. Sometimes stories are  only partially true or maybe they are rooted in events that happened to someone else. When you hear these stories, write them down, along with the name of the narrator and the date, but put them in the category of Family Stories until you do your research. There is one more thing you need to do.  Write the real story, citing sources for all facts uncovered in your research, and be sure to share the information with others researching the same family.


Now, go on - record those stories and set out to determine if they are true! 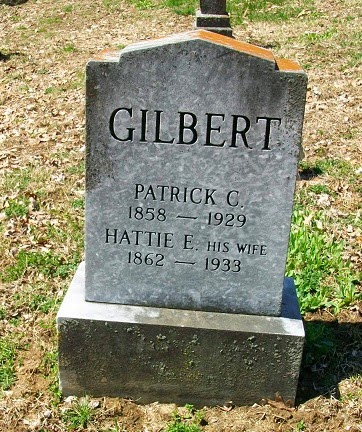 According to his death certificate #25839, Patrick Cain Gilbert was born 30 April 1858 and died 24 September 1929. His parents were listed as Jno. M. Gilbert and Pernecie Brantley.  P.C. Cain married Mahala Fritts 8 January 1880 at the home of Rhoda Fritts in Crittenden County. It is curious that the wife of P.C. Cain is listed as Halie or Mahala on the marriage and census records as well as her death certificate, but is listed as Hattie on her tombstone.  Her death certificate shows her parents as Jack Fritts and Rhoda McCormack, both born in Tennessee. In 1920, P.C. and Mahala (Fritts) Cain were living on Fords Ferry Road, Crittenden County.

Published 9 December 2014, Western Kentucky Genealogy Blog,  http://wkygenealogy.blogspot.com/
Posted by Brenda Joyce Jerome at 3:30 AM No comments: Links to this post

She Changed Her Name


Things do not always work out as planned and we might wish to return to a better time, sometimes making a name change. The following document illustrates this situation, which was found in a file marked "Petitions" in the Caldwell County, Kentucky Clerk's Office in Princeton, Kentucky.

"To the Honorable, the Judge of the Caldwell County Court -
The undersigned desires her name changed.  Her name was originally Mary G. Parker, being her maiden name. She first married Thomas J. Early[1], who is dead. Then she married one Hamlin H. Hicks[2], from whom she was divorced by a judgement [sic] of the Caldwell Circuit Court Ky. at its September term 1856. 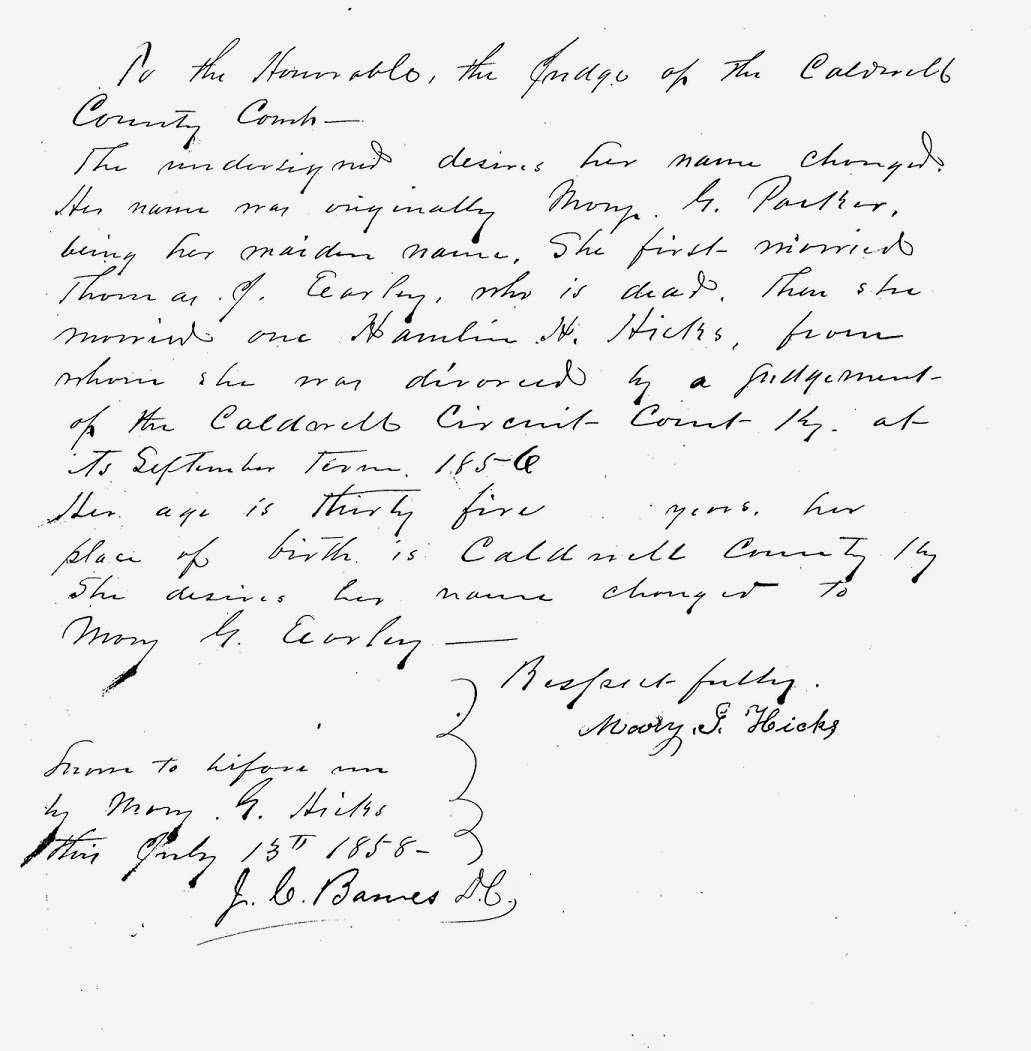 Published 4 December 2014, Western Kentucky Genealogy Blog, http://wkygenealogy.blogspot.com/
Posted by Brenda Joyce Jerome at 3:30 AM No comments: Links to this post 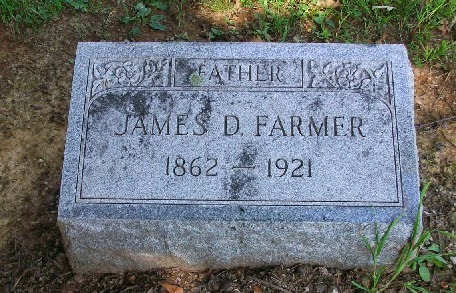 According to Kentucky Death Certificate #10798 (1921), James D. Farmer was born 5 March 1862 Kentucky and died 15 May 1921 Livingston County. His parents are identified as Caleb Farmer and Mary E. Wild, both born in Tennessee.

Published 2 December 2014, Western Kentucky Genealogy Blog,  http://wkygenealogy.blogspot.com/
Posted by Brenda Joyce Jerome at 3:30 AM No comments: Links to this post