Kentucky is fortunate to have birth and death records dating back to 1852. While they aren't complete and many contain errors, they can be helpful and are certainly better than having no records at all. The records begin in 1852 and, for most counties, cover 1853-1859. The law was rescinded during the Civil War, but was reinstated in the 1870s. There are few records during the 1880s and 1890s.  Compliance across the state was not consistent until 1911, when it became mandatory in Kentucky to keep a record of these vital statistics.

According to the law,[1] it was the duty of all physicians, surgeons and midwives to keep a registry of all births and deaths at which they had professionally attended, showing, in the case of deaths, the time, place and cause of death, the name, age, sex, color, and condition (whether single, married or widowed), name and surname of parents, occupation, residence, and place of birth of the deceased.  When two or more physicians, surgeons or midwives attended professionally at the event, the oldest one in attendance shall make the registry.

It was the duty of the local assessors, while making their lists of taxable property, to record a list of all births, marriages and deaths which had occurred within their counties in the 12 months ending on the 31st day of December last preceding the time of assessment.

In the case of births, the information on the registry was to include the time and place of birth, name of father and maiden name of mother, their residence, sex and color of the child, together with the child's name and whether born alive or dead. If the birth was for a slave, the owner's name could be given in place of the names of the parents.  The same applied when listing the death of a slave.

The following death record was found in loose papers (Deaths) in the Caldwell County Clerk's Office, Princeton, Kentucky. Click on the record to enlarge the image.

Published 28 July 2017, Western Kentucky Genealogy Blog, http://wkygenealogy.blogspot.com/
Posted by Brenda Joyce Jerome at 4:00 AM No comments: Links to this post 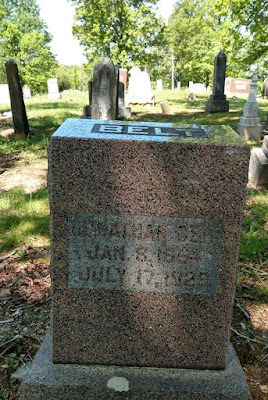 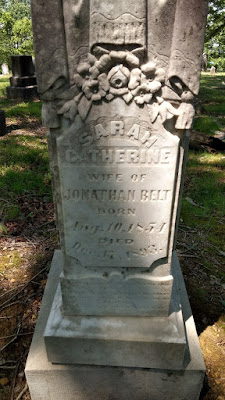 According to the death record of Sarah C. Belt, she died 17 December 1894[1], at the age of 39 in Crittenden County. Her parents were A.W. and Letty Sullinger.

Jonathan and Sarah C. Belt are enumerated on only one census - the 1880 Crittenden County census. Appearing in their household, also, are a daughter, Martha J., age 2, and Jonathan's 28-year-old brother, Enoch.

Published 25 July 2017, Western Kentucky Genealogy Blog, http://wkygenealogy.blogspot.com/
Posted by Brenda Joyce Jerome at 5:00 AM No comments: Links to this post

John A. Sarlls and Rachel A. Miller

John A. Sarlls, a merchant in the Bells mines area of Crittenden County, Kentucky, married Miss Rachel Miller 9 April 1857.[1]  Sarlls, the son of Richard and Julia Sarlls, was born in Carroll County, Kentucky and died of bronchitis on 10 February 1874,[2] leaving Rachel with several young children.

John A. Sarlls appears in the household headed by H.W. Evertson, New York - born merchant, on the 1850 Union County, Kentucky census. In 1860, John A. and Rachel A. Sarlls, with their daughter Sarah E., were living in Bells Mines in their own home. Just a few months previously, on 7 March 1859, their three-month-old son, William H. Sarlls, had died of the croup. [3]

J.A. Sarlls registered for the draft in the Civil War service in 1863 and stated he was 27 years old, a merchant, married and was born in Kentucky. [4]

Following the death of J.A. Sarlls, his widow, Rachel, was appointed administrator of his estate on 27 September 1874. Sureties were William J. Wilson, W.H. Tudor and John Mangin.[5]

Rachel Miller appears on the 1850 Crittenden County census in the household of John and Sarah (Miller) Mangin, who had married 20 May 1850.[6] Sarah Miller Mangin was the widow of William A. Miller, who died in 1847 and was likely the father of Rachel Miller Sarlls.

John A. and Rachel Sarlls are both buried in Bells Mines Cemetery, Crittenden County.[7] 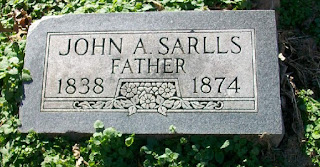 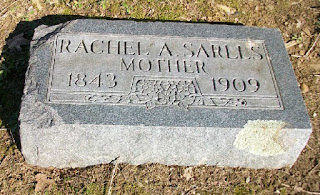 Published 21 July 2017, Western Kentucky Genealogy Blog, http://wkygenealogy.blogspot.com/
Posted by Brenda Joyce Jerome at 5:00 AM No comments: Links to this post 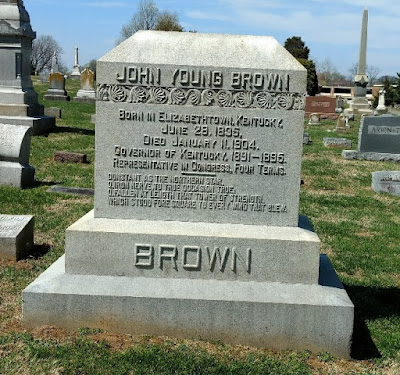 Published 19 July 2017, Western Kentucky Genealogy Blog, http://wkygenealogy.blogspot.com/
Posted by Brenda Joyce Jerome at 5:00 AM No comments: Links to this post

We consider it fortunate to find an ancestor's tombstone giving his dates of birth and death, but it is a bonus if there is additional information. Some tombstones seem to have been designed by genealogists to help us fill in the blanks.

Now, it is rare to find the entire life story of a person engraved on his tombstone, but Esther Calhoun Love told us of the death of her husband on her tombstone. The original marker was in bad shape and has been replaced by a new marker. This is the old marker, as photographed in 1990. 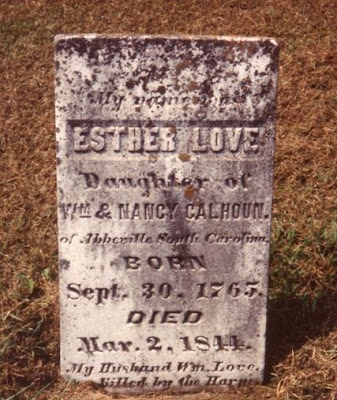 Mickleberry Bristow made sure that everyone knew of his affiliation with the Masonic fraternity by including many Masonic symbols on his tombstone.  He is buried in Mt. Zion Cemetery in Crittenden County. 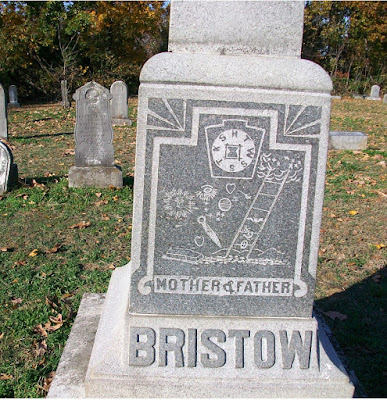 Her religious preference was important to Evaline Taylor. Engraved on her tombstone in Green's Chapel Cemetery, Crittenden County, is the following: "Joined the Methodist Episcopal Church 1824"

Tombstones with additional information most often include place of birth. Elizabeth Steinbreaker is buried in Smithland Cemetery, Livingston County. The engraving tells us she was born in Baden Baden, Germany 7 July 1806 and died 23 August 1875. 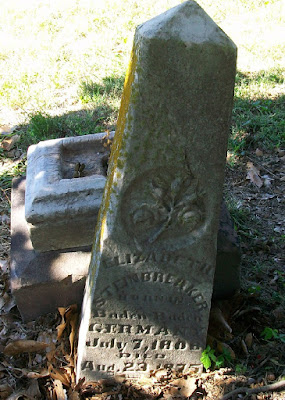 Not to be outdone, when Louisa Carson's  family members died and were buried in Smithland Cemetery, she made sure their places of birth were included, but which family member is lacking this information? Louisa, of course!

Don't forget to look on all sides of tombstones as sometimes the best information is on the reverse side and if  you look at the bottom of the tombstone - sometimes on the front and sometimes on the back. You may just learn which stonecarver or monument company made the tombstone.
Posted by Brenda Joyce Jerome at 4:30 AM No comments: Links to this post

What happened when a woman gave birth to a child begotten and born out of wedlock?  Did the mother have any legal recourse?   If she named the child's father, yes, she did have legal recourse.

Any unmarried white woman would go before a judge of the county court of the county in which the bastard child was born and accuse a person of being the father of the child. Her statement was then reduced to writing and signed.

If the child appeared to be less than three years of age, a warrant was issued, requiring the accused person to be apprehended and brought before a judge of the county court. He was required to enter into recognizance, with good surety, in the sum of $300, to appear at the county court and abide by the judgment of the court.

If the accused person refused to give recognizance, the judge would commit him to the county jail where he would remain there until he gave recognizance or otherwise be discharged by due course of law. [1] If ordered to pay a sum of money, the father might pay in a lump sum or in installments.

There were cases, however, where the mother of a bastard child never went to court to name the father of her child and it is assumed she and/or her family provided support for the child. The aim of having the father pay for the child was to prevent the child from becoming a charge upon the county.

Published 11 July 2017, Western Kentucky Genealogy Blog, http://wkygenealogy.blogspot.com/
Posted by Brenda Joyce Jerome at 4:30 AM No comments: Links to this post

Proving once again that it helps to expand the boundaries in your research, the following death notices[1] were found in a Nashville, Tennessee newspaper. While that may seem strange, it really isn't. Steamboats had begun plying the rivers in 1811 between Smithland and Nashville, making travel between the two cities faster and easier.  News traveled farther and quicker by steamboat, but  newspapers were still read, shared and read again.  The following death notices were of interest to the folks who traveled the rivers or who lived anywhere between the two cities.

Died
- At Smithland, Kentucky, on the 4th inst., Maj. Richard Ferguson, an old settler of that place.

Published 6 July 2017, Western Kentucky Genealogy Blog, http://wkygenealogy.blogspot.com/
Posted by Brenda Joyce Jerome at 4:30 AM No comments: Links to this post 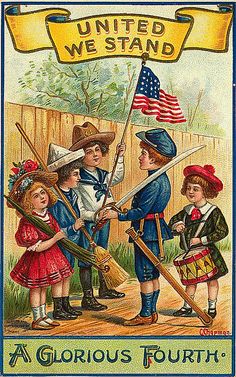 Published 4 July 2017, Western Kentucky Genealogy Blog, http://wkygenealogy.blogspot.com/
Posted by Brenda Joyce Jerome at 5:30 AM No comments: Links to this post

They Snowballed the Fire

On this hot summer day (90 degrees), maybe this story will cool you off.

They Snowballed the Fire[1]

The citizens of Smithland, Ky. adopted a novel method of extinguishing a fire during the winter season. A blaze started in a residence, and when the usual impromptu bucket brigade arrived at the scene, it was found that no water was to be had, every available supply being frozen and the ground covered with snow.  Finally a bright idea struck someone in the crowd, and the suggestion was made that the party should use snow to subdue the flames.

The excited citizens divided, and one company rolled up snowballs about a foot in diameter and passed them on to others, who heaved them over on the rapidly consuming structure.  The house being on the hillside made this an easy matter, as they secured a good vantage ground on the hill above the house, which rendered it an easy matter to throw the snow over with accuracy and effect.  To make a long story short, the fire was extinguished before it gained any headway in the main building, and the floors in one or two other rooms were saved.

The people in Smithland are still talking about how they put out the fire.

Published 1 July 2017, Western Kentucky Genealogy Blog,  http://wkygenealogy.blogspot.com/
Posted by Brenda Joyce Jerome at 4:30 AM No comments: Links to this post