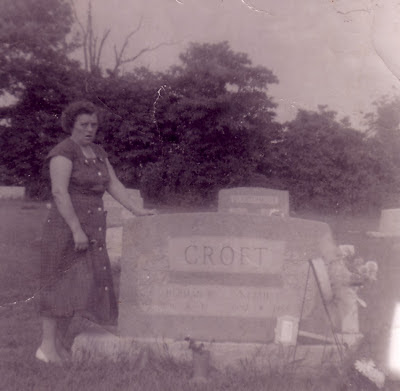 One of the greatest things we can do for our children is to teach them how they fit into this world – the place created just for them by their ancestors. When I was growing up, parents and children cleaned and decorated family graves together on Memorial Day. With every pulled weed or flower placed on a grave, a memory of each relative was invoked – a nickname, a special trait, the color of their hair and how they fit into the family. I learned about Great Aunt Eddie Vaughn Pittillo and how much I resemble her in appearance. I learned who made the concrete border for little Edith’s grave. I learned that the red hair running through the Joyce family comes from Great Grandmother Mary Ann Smith and that she smoked a pipe and used Star brand tobacco. I also learned that her father, Hugh Wolstenholme, "washed his hands in the clouds" when he crossed the mountains. Those stories should not be forgotten.

By noon we were ready for a break of sandwiches and ice cold drinks, welcome treats as it was sure to be hot and sunny on Memorial Day in southern Illinois and western Kentucky. And then it was back to work and we continued until the grass was trimmed, weeds were all pulled and each grave had a bouquet of flowers stuck in a Mason jar or coffee can. There was a sense of satisfaction when we packed up and headed for home.

I worry that when I am gone, my children will no longer visit the little country cemeteries and, oh, how I hope they don’t forget the stories of their ancestors.

This was originally published on  Rambling Thoughts ... Out of My Mind   http://brendasopinions.blogspot.com/2009/05/memorial-day-memories.html  22 May 2009.

Published 29 May 2017, Western Kentucky Genealogy Blog, http://wkygenealogy.blogspot.com/
Posted by Brenda Joyce Jerome at 5:00 AM No comments: Links to this post 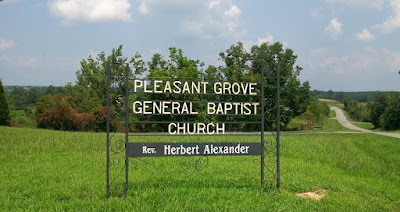 Adjoining the church is the cemetery where many members of my family and other families are buried. These  families include the following: Croft, Corn, Bebout, Lynn, Jones, Millikan, Watson, Miller and Belt, 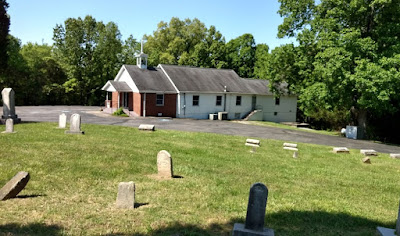 Published 25 May 2017, Western Kentucky Genealogy Blog,  http://wkygenealogy.blogspot.com/
Posted by Brenda Joyce Jerome at 5:00 AM No comments: Links to this post 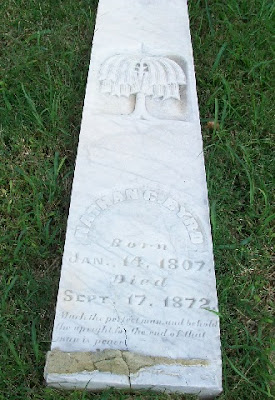 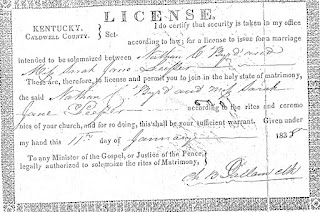 Published 23 May 2017, Western Kentucky Genealogy Blog, http://wkygenealogy.blogspot.com/
Posted by Brenda Joyce Jerome at 4:00 AM No comments: Links to this post

Have you wondered about the origin of an epitaph on a tombstone? Did it have special meaning to the deceased or the family?  One of the easiest ways to check on the epitaph is to ask our friend, Google. That's what I did with the epitaph on the tombstone of Martha A. Perkins, who is buried in Leeper Cemetery in Livingston County. 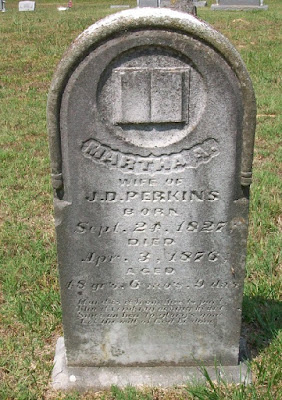 "Hard is it from thee to part
Tho it rend my aching heart
Since an heir to glory's gone
Let the will of God be done."

The epitaph is taken from "Psalms and Hymns Adapted to Social, Private and Public Worship of the Cumberland Presbyterian Church."  Could this be a clue to Martha A.'s religious affiliation? Or was this epitaph ordered from a tombstone catalog with little thought given as to whether it was appropriate for the decedent? If charges were made for each letter, an epitaph of four lines would have been fairly costly and certainly more expensive than a simple epitaph like Gone Home or Farewell or Gone But Not Forgotten.

To be most helpful, transcribe every word on the tombstone.

Published 19 May 2017, Western Genealogy Blog, http://wkygenealogy.blogspot.com/
Posted by Brenda Joyce Jerome at 3:30 AM No comments: Links to this post 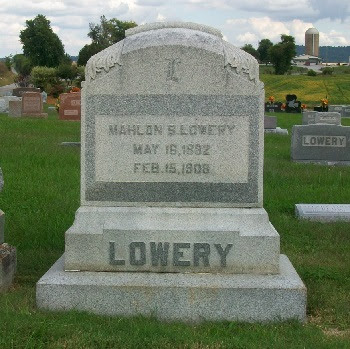 Malin [sic] B. Lowery is enumerated in the household of John and Grace Lowery on the 1850 Caldwell County, Kentucky census.[1]  John Lowery and Grace Ordway married 22 September 1825.[2] They are buried at Old Fredonia Cemetery .

Mahlon B. Lowery married Miss Lucy C. Rorer 23 December 1869 in Caldwell County.[3] This marriage bond contains quite a bit of information. The groom was 35 years old, was born and currently lived in Caldwell County, was a farmer and this was his first marriage. His father was born in Virginia and his mother was born in New Hampshire.  Miss Rorer, the bride, was age 20, was born in Crittenden County, Kentucky and currently lived in Caldwell County and this was her first marriage. Her parents were born in Virginia. Richard Rorer, father of the bride, gave consent for the marriage license to be issued. 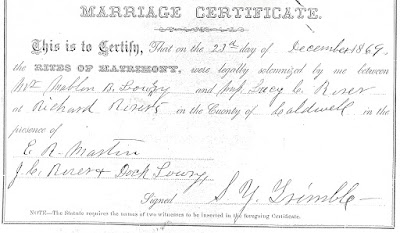 Published 16 May 2017, Western Kentucky Genealogy Blog,  http://wkygenealogy.blogspot.com/
Posted by Brenda Joyce Jerome at 5:00 AM No comments: Links to this post

Joseph Bridges was granted a license to keep a tavern at his tavern house in Carrsville. 7 May 1866. [M:353]

W.W. Phillips and G.W. Crane were granted a license to keep at tavern at the Elliot House in Smithland.  J.T. Crane took the oath required by Law to act as clerk in the Elliot House Hotel. 4 Sep 1866.  [M:373]

Joseph Bridges granted a license to keep a tavern at his tavern house in Carrsville. 6 May 1867. [M:420]

Thomas Nelson was granted a license to keep a tavern at his tavern house in Birdsville. 6 Jan 1868. [M:477] 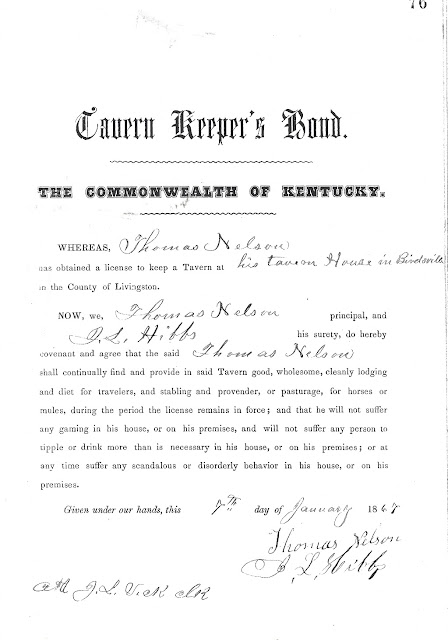 Published 12 May 2017, Western Kentucky Genealogy Blog, http://wkygenealogy.blogspot.com/
Posted by Brenda Joyce Jerome at 3:30 AM No comments: Links to this post 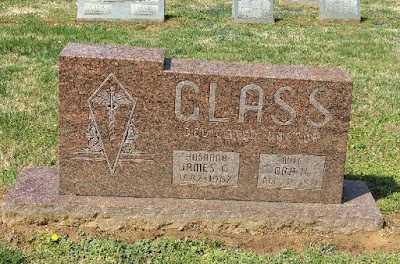 Dr. James Garfield Glass was born in Hopkinsville, Kentucky on 12 November 1882[1] to Edward W. Glass and Sallie MacReynolds .[2]  Dr. Glass graduated from Clark Embalming School in Cincinnati and Meharry Medical College (Walden University) in Nashville, Tennessee in 1908. He was in the undertaking business with his father before practicing medicine, first in Hopkinsville and then moved his  practice to Henderson in 1908.[3]

Ora  Kennedy Glass was born to the Rev. P.H. Kennedy and Virginia Dabney in Henderson about 1895. Her mother was the "first  graduate of a Negro school in Henderson and the first licensed Negro teacher in Henderson."[4]

Dr. Glass and Ora Kennedy were married 6 November 1913. They had two children.[5]

Published 9 May 2017, Western Kentucky Genealogy Blog, http://wkygenealogy.blogspot.com/
Posted by Brenda Joyce Jerome at 5:00 AM No comments: Links to this post

The following article  appeared in the  Evansville Journal of 28 July 1920.

"Marion, Ky. showed an increase in population of 91 inhabitants, according to figures issued by the census bureau.

Now, relate these figures to the lives of your Crittenden County ancestors and ask yourself the following questions:

1.  What was the reason for the population increase of Marion?

2.  How was life in town different from life in the country?

3.  What drew them to town?  Educational opportunities?  Better medical care?

4.  The entire county population decreased from 1910. Where did the people go and why?

5.  Are there any stories in your family about  relatives or friends who moved away?

6.  Did the decrease in population affect your family and how?

Sometimes a look at the population statistics helps us understand what was happenings in our ancestors' lives.

Posted by Brenda Joyce Jerome at 5:00 AM 3 comments: Links to this post

John Bebout and Sarah Ann Shoemaker were married 4 February 1841 in Caldwell County, Kentucky. [1] They were later enumerated on the 1850 Caldwell County census with their three oldest children, Mary, Abraham J. and John A. Bebout. [2]

By 1860, John and Sarah had moved to Crittenden County, Kentucky. Their children are listed as Mary, Abraham J., John A., Enoch B., James B. and Columbus Bebout.[3]

Sarah A. Bebout died in 1869 and John died in 1883.  Both are buried in Deer Creek Cemetery in Crittenden County. 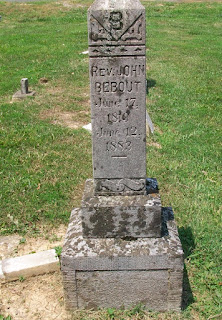 Published 2 May 2017, Western Kentucky Genealogy Blog,  http://wkygenealogy.blogspot.com/
Posted by Brenda Joyce Jerome at 4:30 AM No comments: Links to this post