It is often very difficult to research your family history if you did not live with your biological family. So when records regarding adoptees or orphanages turn up, I try to save them in case they will be helpful in someone's research. The following information comes from Caldwell County, Kentucky court records. They are public records and open to all persons.

In Fiscal Court Order Book 1 (1893-1905), page 544 (5 August 1904), we find the following information: "It appearing to the satisfaction of the Court that [blank] Towery an infant has no permanent home, that she is destitute and dependent upon charity for support that her father has abandoned his family and is supposed to be living in the State of Arkansas and makes no provisions for the support of said child and that her mother is dead. It is ordered that [blank] Towery be and she is by this court surrendered and committed to the Kentucky Children's Home Society of Louisville and that said Society may obtain for said child legal adoption by some proper person or persons to be chosen by said Society or its authorized agents And it is further appearing that said Society will require Fifty Dollars to be paid to it on account of the support of said child."

Then, in County Court Order Book R, page 366, 16 March 1908, we find the following: "It appearing to the satisfaction of the Court that Ray Towery, now about five years old, and he is destitute, and has no relations known to this court, and that he is now a ward of the Children's Free Hospital, Louisville, Ky, It is ordered that the said Ray Towery be, and he is surrendered and committed to the Kentucky Children's Home Society Louisville, Ky to be dealt with according to the rules and regulations ... I take judicial notice of the apparent fact that Ray Towery has been tacitly under the control of the above named Society since 1904."

Even though called "she" in the first record, there is no doubt that both records pertain to Ray Towery. At age 7, Ray Towery is found as a inmate of the Kentucky Children's Home in Louisville on the 1910 Jefferson County, Kentucky census. I am not sure where he went from there, but there is a Ray Towerie, age 18, as a servant in the home of Earnest Eastland on the 1920 Lyon County, Kentucky census. Did he return to western Kentucky when he left the Children's Home?

I hope this information will help someone who has a brick wall in their Towery family research.

Time to stock up on genealogy books while the price is low. To see what is on sale, go here: Book Sale
Posted by Brenda Joyce Jerome at 1:46 PM No comments: Links to this post 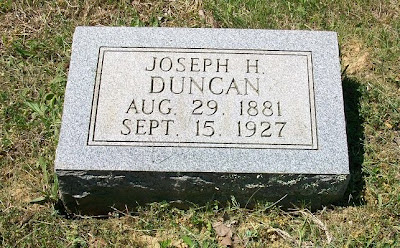 Posted by Brenda Joyce Jerome at 2:48 AM 2 comments: Links to this post

There was no Slingslow District

Bottom line - there was no Swingslow district. The word should be Livingston.

Posted by Brenda Joyce Jerome at 2:33 PM 6 comments: Links to this post

More Information on Gustavus A. Brown

﻿
Dr. Gustavus A. Brown was a colorful character in Smithland, Kentucky during the 1830s. I suspect the reason for many Smithland children being named Gustavus can be attributed to this man. I am intrigued by Dr. Brown and am always looking for additional information on him. Recently, I came across the following biographical sketch in Journal of the American Medical Association, Vol. 1 (1883), page 602.


Brown, Gustavus Alexander, M.D., born about 1790 in Alexandria, Va., died in 1835 in Smithland, Ky. His father, Dr. Wm. Brown, of Alexandria, was Physician-General during the Revolutionary war. His mother's maiden name was Catharine Scott, of Scotch descent. The subject of this sketch graduated at Princeton, N.J., and studied medicine at the University of Pennsylvania, graduating n 1815. The subject of his thesis was Dysentery. He commenced practice in Alexandria and continued until 1825, when he returned to Smithland, Ky., in the neighborhood of which town he owned a large estate inherited from his father. He practiced medicine in Smithland till 1835 when he was killed in a private encounter. He was never married. His property at his death went to his heirs at law, he having died intestate. He was buried at Smithland." The father of Gustavus A. Brown received a land grant for services provided during the Revolutionary War. The land was located at The Point, the land, across from Smithland, where the Cumberland River runs into the Ohio River and where the town of Westwood was later established. The year of death is incorrect in the above sketch. It was 1838 that he was murdered in the Gower House on Front, or Water, Street in Smithland. If Dr. Brown is buried at Smithland Cemetery, there is no tombstone to mark his grave.
Watch for more updates on Gustavus A. Brown.


﻿
Posted by Brenda Joyce Jerome at 2:40 AM No comments: Links to this post 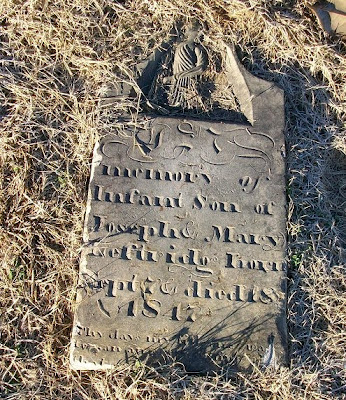 FamilySearch is reporting that 22% of the 1940 census for Kentucky has been indexed. Many counties have portions completed and the images may be browsed now. Joining in the indexing effort are the genealogical societies for Caldwell, Crittenden and Hopkins Counties.

You might want to take a look, also, at what else is available on Kentucky on FamilySearch. New records are added often, but be aware that some records require a paid subscription to Fold3, including the Civil War records for Union and confederate soldiers.

If you have not checked the McCracken County, Kentucky Records Search , you might give it a try. I've found a number of folks from surrounding counties moved to Paducah and some simply went there to marry. This is a handy link.

Those who were regular watchers of Ancestry.com-sponsored Who Do You Think You Are on NBC are going to be disappointed that the show has not been renewed for 2013. Some episodes were very interesting, but others were not, in my opinion. I wonder if all of the travel to faraway countries also put a financial strain on the network.
Posted by Brenda Joyce Jerome at 2:47 AM No comments: Links to this post 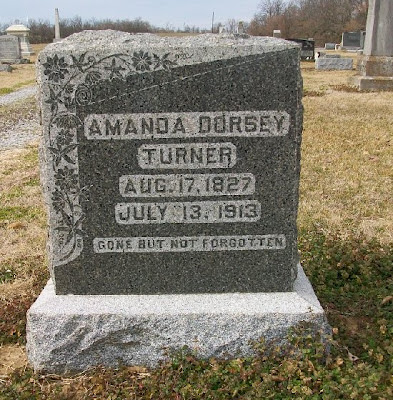 According to her death certificate, Amanda was born near Corydon to Noah Dorsey and Ann Hall, both of whom were born in Maryland. 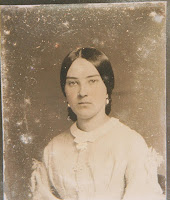 Mary Elizabeth Barner's life was short, but full of contrasts. She lived long enough to acquire an education, but died before she could experience the wonders of matrimony and motherhood. She lived a comfortable life as a child and young woman, but later saw her town and country divided by politics and war.

Sometimes called Mollie, she was the third child born to Sterling M. Barner and his wife, Sarah Jane West. Their first child was stillborn and their next child was a son, Joseph, born about 1840. Mollie was born 2 October 1842 in Tennessee, shortly before the Barner family moved from Nashville to Smithland, Kentucky. In Smithland, the family settled into the home of Sterling's brother, Benjamin Barner, on Charlotte Street. The Barner brothers were commission merchants, storing and shipping goods via the Ohio and Cumberland rivers. Sterling's background as a steamboat captain was, no doubt, instrumental in the brothers' business success.

Mollie's childhood remains a mystery, but it is known that the Barner family was wealthy enough to enjoy a comfortable life. Mollie was probably a bit spoiled as she was the baby of the family until 1849, when her sister, Pattie, was born. Another child was born in 1855, but was either stillborn or died shortly after birth. Mollie would remain the "middle child" in the Barner family for a number of years.

The daughters of wealthy Southerners were often sent to Nashville to be educated at the Nashville Female Academy. We don't know how long Mollie attended Nashville Female Academy, but she was there long enough to graduate. Founded in 1817, the Academy was located at Church and McLemore Streets. Students received lessons in manners, good morals, and were encouraged to read the types of books suitable for young ladies.

The Nashville Female Academy closed in 1862, when the school was occupied by Federal officers. The closing of the school coincided with a year of tragedy for the Barner family. In June of 1862, Mollie's father, Sterling, passed away at the age of 71 years. Then, on 30 November 1862, Mollie succumbed to typhoid fever. Her body was placed in a vault in Nashville City Cemetery. A later survey of burials indicated that Mollie's remains were no longer in the vault. Many bodies buried during era were moved to Mt. Olivet Cemetery when Nashville City Cemetery flooded, but Mt. Olivet has no record of a transfer and reburial. It is assumed that Mollie's body was removed to Smithland Cemetery, where there is a broken tombstone next to the tombstone of her sister, Pattie. 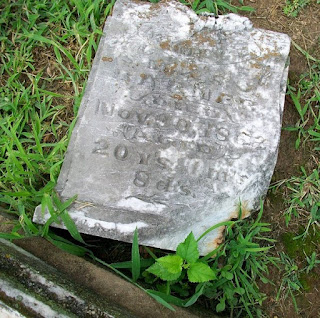 Posted by Brenda Joyce Jerome at 2:52 AM No comments: Links to this post 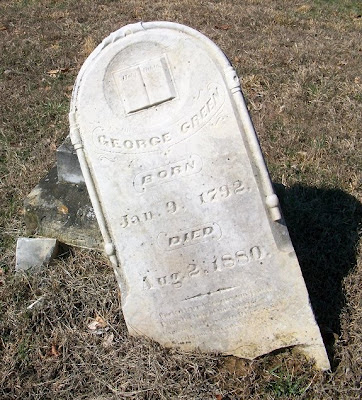 For more information on George Green, see "George Green or George Crayne - Which Is It?" by the late Sherri Woodall Stidham in Vol. IV, No. 3 (1997) of the Western Kentucky Journal.

When a person died intestate (without a valid will) and owned property, a person was appointed to collect debts and credits of the estate and disperse whatever remained, according to law. The legal term for this person was administrator of the estate. Often the surviving spouse was the choice for administrator, but sometimes that person might relinquish his or her right to administer in favor of another person. This is what happened following the death of George Marshall, who died before October 1827. His widow, Polly Marshall, stated she did not wish to take upon herself "the burthen of the administration of the estate" and suggested that John W. Marshall and Saml. Marshall be appointed. This information is found in Caldwell County, Kentucky Court Order Book D, page 330. 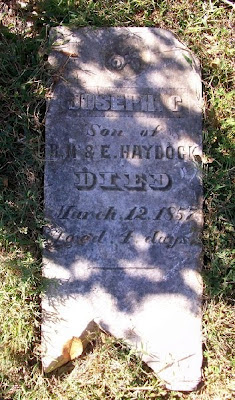 
Buried Smithland Cemetery, Smithland, Kentucky. Tombstone photographed 15 October 2010. At the top of the tombstone is a rose bud, which is often found on tombstones of children.

Joseph Courtney Haydock was the son of Richard M. Haydock and Elizabeth Watts, who married in Smithland 26 October 1852. Richard M. and Elizabeth Haydock left Kentucky and settled in California, where both died.

Posted by Brenda Joyce Jerome at 2:28 AM No comments: Links to this post