I'm planning a trip this summer to research one of my families. In order to get the most out of this short visit, I need to be prepared.

I've reviewed my files to refresh my memory of what I have and what I don't have. My goals are itemized.  Records to check have been listed and I know what courthouse offices should have those records. I have the address of the local library where I hope to check  published and unpublished materials that might be helpful.

Do I know in which cemeteries my ancestors are buried? Where are the cemeteries located? Are the cemeteries easily accessible in the summer or should another visit be planned for winter when the ticks and snakes are sleeping?   Are the cemeteries only open certain hours and is there an office that can help locate their plots?  I might need to make a phone call to learn the answers to these questions.  Find A Grave  might also be helpful.

I guess I am ready - No, wait! I need to find a motel or hotel. A quick check online tells me where they are located and if available for the right times. Reservations made. Now, I'm ready.  This promises to be a great research trip! Going prepared will help me use my time efficiently.


Posted by Brenda Joyce Jerome at 3:30 AM No comments: Links to this post

Grant L. Brewer was born 18 October 1888 Tennessee and died 14 November 1929 Livingston County, according to death certificate #29597 (1929). He was the son of Jesse Brewer and -- Wallace, born of whom were born in Tennessee. This family was enumerated on the 1900 Stewart County, Tennessee census.

Mrs. Addie Brewer died 6 October 1925, according to death certificate #2180 (1925). She was the daughter of Theodore Stegall, who was born in Smithland, and Rosa Jarrett, who was born in Lyon County, Kentucky.

A number of steamboat men got their start on the river while living in Smithland, Livingston County, Kentucky and later moved to Evansville, Indiana, which was a center for steamboat traffic. The Evansville newspapers are full of news of the steamboats and their pilots and passengers. The following obituaries caught my attention. 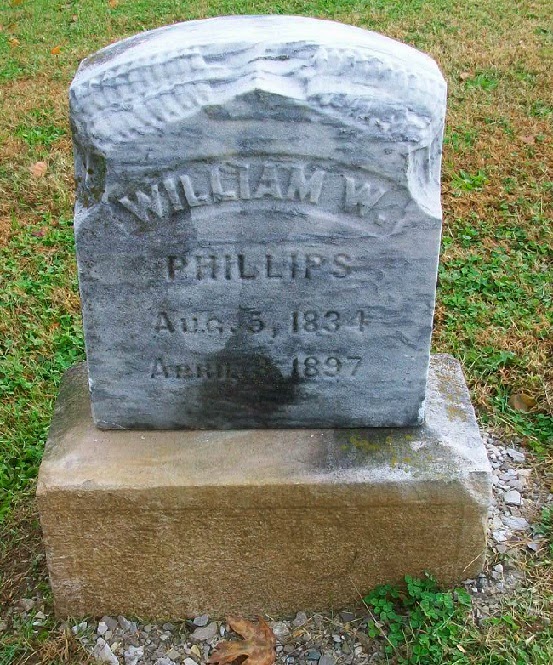 
Evansville Courier  4 April 1897
Captain William Washington Phillips, one of the best-known pilots on the river, died yesterday afternoon at his residence. He was 62 years old. Capt. Phillips had been a sufferer of Bright's disease for about three years and for the last four months he had been confined to his home.

Capt. Wash Phillips, as everybody called him, was born near Smithland, McCracken [sic] county, Kentucky on August 4, 1835 [sic], being the oldest child in a family of seven. He attended the public schools of Smithland until he was 16 years old.

At an early age, Capt. Phillips learned the trade of ship carpentering and during his whole life was connected with steamboats in various capacities. When the civil war broke out, Capt. Phillips was a young man in the prime of his life and had bright prospects. When his country's flag was fired upon at Fort Sumter, he was seized with a desire to help save the union, which then seemed certain of destruction. He was engaged as pilot of an union gunboat and served throughout the war. He participated in many of the fierce engagements that took place on the rivers of the southern states.

At various times [after the war], he was employed as a pilot on the John S. Hopkins, Dick Fowler, Dexter, Cumberland, Idlewild and City of Evansville [steamboats]. He was proprietor of the tug Robbin at one time. Capt. Phillips had not been engaged in active service on the river for several months owing to his failing health.

Evansville Courier 6 April 1897
The funeral of the late Capt. Washington Phillips occurred yesterday afternoon from the family residence at 1612 East Virginia street. The services were conducted by the Rev. Samuel Reid, pastor of Ingle street M.E. Church. The remains were buried at Locust Hill.

The 1850 Livingston County, Kentucky census shows William W. Phillips, age 16 and born Kentucky, living in the household of William and Judah Phillips in Smithland. When William Washington Phillips married Miss Martha Jane Tigner in Smithland 5 October 1853 he stated he was born in Massac County, Illinois and was living at West wood or the Point. His mother, Judith Phillips, a widow, gave consent for the license to be issued. He was 19 years old and his bride was 16.  By 1860, Wash Phillips and his family were living in Evansville. Wash Phillips, Martha Tigner Phillips and son, W.T. Phillips, are all buried at Locust Hill Cemetery, Evansville. Martha does not have a tombstone.


Posted by Brenda Joyce Jerome at 3:30 AM No comments: Links to this post 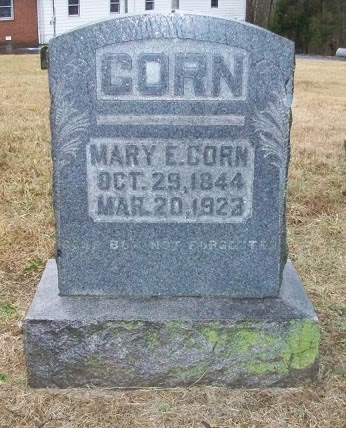 According to death certificate #10404 (1923), Mary E. Corn was the daughter of George Watson and Mary Etta Porter, both born in Kentucky.  The 1880 Crittenden County census (Hurricane District) shows Mary E. Corn in the household of James C. Corn. They had married 16 September 1859 in Pope County, Illinois.

A Game for Family Reunions

One of our favorite summertime activities this time of year is attending family reunions. Sometimes, though, there is a lull, especially after the meal,  and something is needed to liven up the group. This is what we did at our family reunion last summer - and it worked.

Everyone arranged their chairs in a large circle and we started our game -  a game called "I Remember." Each person was asked to remember an event from long ago about someone else in the family, living or dead. For example, one person mentioned Grandma courting with her beau and soon-to-be second husband when she was 70 years old. Another person mentioned the many model airplanes hanging from the ceiling in my brother's room when he was in elementary school.  One memory seemed to spark another and before long we were laughing at events long-forgotten or never known.  The best part about this game is that everyone could participate and no materials were required. Maybe this is something you might like to try at your family reunion. 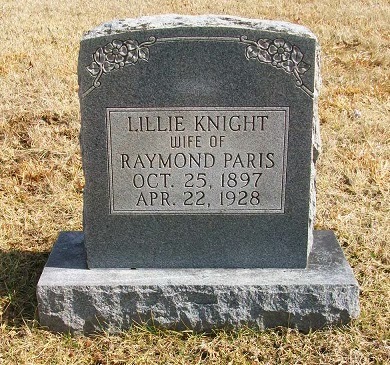 According to death certificate #10445 (1928), Lillie Knight was born in Kentucky and was the daughter of T. Pink Knight and Lucy Stewart, both of whom were born in Tennessee. Lillie appears on the 1920 Livingston County census in Driskill Precinct with her husband, Raymond Paris, and one year old daughter, Eula Paris.

Recently an older cousin mentioned the phrase, "First Table," when talking about dinner table seating for groups, including large families. The phrase brought back some long-forgotten memories from my childhood. "First Table" refers to the practice of men and older boys eating first when there is not enough room for everyone to sit around the table together. Women and children ate at a later seating.  As a girl and especially as a child, I was always relegated to the second or third seating. It may not have been politically correct, but that is the way it was and it was not questioned. Was this a Kentucky custom or was this common in other parts of the United States? 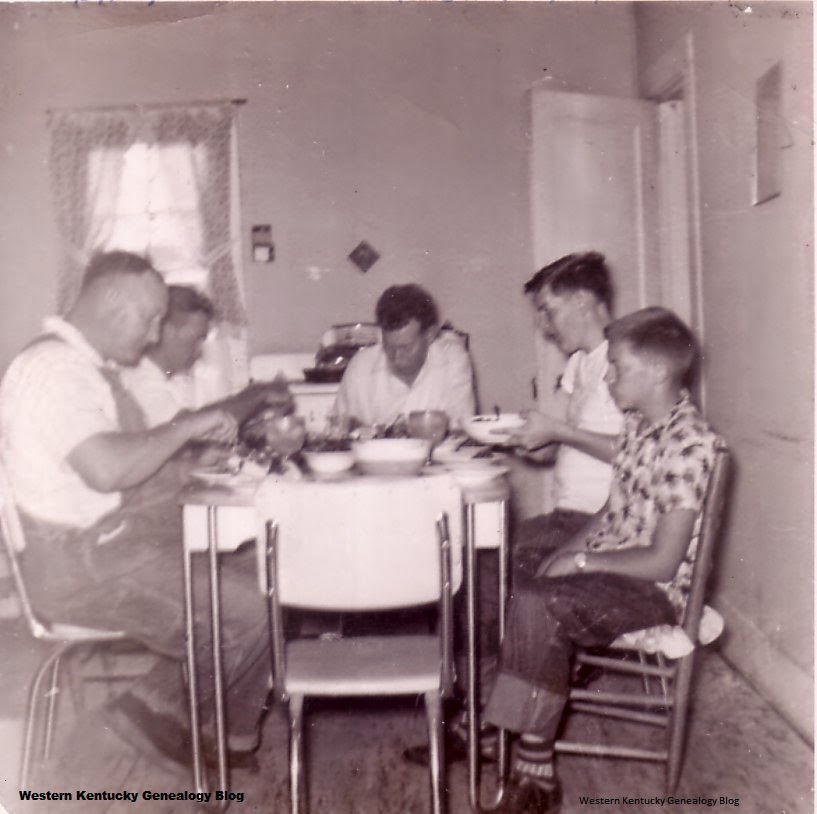 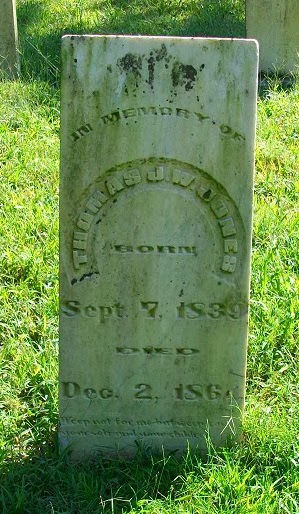 Published 6 May 2014, Western Kentucky Genealogy Blog,  http://wkygenealogy.blogspot.com/
﻿
Posted by Brenda Joyce Jerome at 3:30 AM No comments: Links to this post

﻿
Posted by Brenda Joyce Jerome at 6:48 PM No comments: Links to this post

The following article appeared in the Crittenden Press 16 August 1894 and was reprinted in the Caldwell County Times, Princeton, Kentucky, 26 August 1926.  Marion is the seat of justice of Crittenden County and, in 2012, had a population of 3,025.

"The first page of this illustrated edition contained a history of Crittenden County, including its agriculture resources, soil climate and the educational, religious and business institutions. According to this account the first settler to what is now Crittenden County was James Armstrong, of South Carolina, who in 1786 "with his chattels loaded on a pack horse," he came to a spot on Livingston Creek a few hundred yards below Centerville ford and built a cabin, 12 feet square, no door, but with a window in the gable that was reached by a ladder that was drawn inside the cabin for the night. The first town in the county was known as Centerville. The first house in Marion was occupied by Dr. John S. Gilliam.