It is easier to believe our ancestors played by the rules and were honest, respectable citizens, but that is not always true. Just like people of today, they broke the rules - had children out of wedlock, ran off and left their families, got into debt and lost their farms and did not always tell the truth. Keep this in mind when you can't find a record. Ask yourself "What if ..."  It may lead you to records you had not previously considered.

Many descendants of my great-great-great- grandmother, Rebecca Vaughn, list her in their family trees as Mrs. Rebecca Vaughn, widow. They have assumed she was a widow as she had children before her marriage to John Jacob Burner in 1834.[1] The problem is no marriage before 1834 has been found for her in Kentucky or any place else. Also, Rebecca was not listed as a widow when she married Burner.  Sarah Vaughn, who was probably a sister to Rebecca,  married George Fisher[2]  and Fisher was surety on  the marriage bond of Burner and Rebecca. And there were other connections.

Rebecca is listed as Rebecca Vaughn on the 1840 and 1850 Livingston County census records.  It is only on the 1860 census that she is shown as Rebecca Barner [Burner] -  17 years after Burner filed for divorce from Rebecca.[3]

My theory is Rebecca was a single mother prior to her marriage to Burner and so far, all signs point that way.

Published 30 August 2018, Western Kentucky Genealogy Blog, http://wkygenealogy.blogspot.com/
Posted by Brenda Joyce Jerome at 5:30 AM No comments: Links to this post

From Our Photo Album 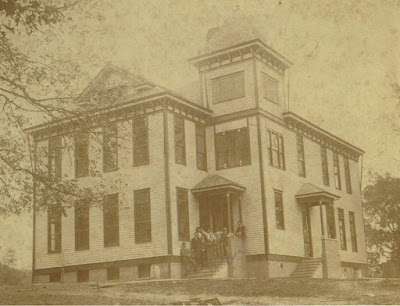 Published 28 August  2018, Western Kentucky Genealogy Blog, http://wkygenealogy.blogspot.com/
Posted by Brenda Joyce Jerome at 5:00 AM No comments: Links to this post

Census records are very helpful in determining the residence of our ancestor, but the census was only taken every ten years. How do we know if they lived there between the census records?  One way is through the use of petitions, which were generated as needed and instead of every ten years. When a new road or ferry or precinct was desired, neighbors banded together to sign a petition for the improvement and presented it to the county court. Knowing the names of the neighbors helps us place the location of our ancestor.

"Common Wealth of Kentucky  Livingstone County, --- To the Worshipfull Court at Salem:  We your petitioners Consider it much to the advantage of Travellers to turn the road betwixt McGaskings and Mr. Cowserts about two miles distance, It will be about half a mile higher, and will afford Water for the accommodation of Travellers Which is not to be had on the old road. We hope you will take the Case under your Serious Consideration and grant our petition as far as you think proper --  Signed by Us this 13th May 1814." 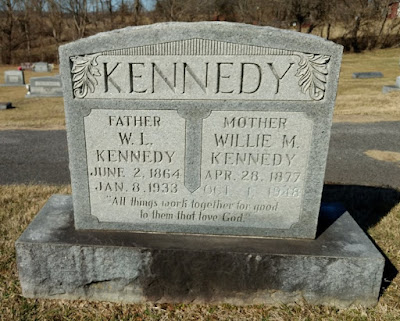 "All things work together for good to them that love God."

Willie May Kennedy, a widow,  was age 71 years, 5 months and 3 days when she died on Oct. 1, 1948. Her parents were John Fowler and Sue Stephens, both of whom were born in Kentucky. Mrs. C.E. Babb was the informant on Willie May Kennedy's death certificate. [4]


Published 21 August 2018, Western Kentucky Genealogy Blog, http://wkygenealogy.blogspot.com/
Posted by Brenda Joyce Jerome at 5:30 AM No comments: Links to this post

Slaves in Kentucky were manumitted [emancipated] through the county court or through a provision in the last will and testament of the slave's owner. The amount of the bond was not paid unless the slave had no support and became a charge upon the county. The following manumission is recorded in Caldwell County, Kentucky Order Book D, pages 160 and 169.

"A Deed of manumission from Hugh McVay of this County to Iras commonly called Ivy was this day produced in open Court and acknowledged by McVay to be his act and deed for the purposes therein named and ordered to be recorded, to wit:  State of Kentucky  Caldwell County To wit: Be it Known that I have this day emancipated and set free my negro Woman named Iras commonly called Ivy  of dark complection  aged about forty five years which said girl was purchased by me of and from David Tucker of Mecklingburg County and state of Virginia hereby Renouncing all claim to her from henceforth, and do request the County Court of Caldwell to give the Certificate a place on their records. And furthermore request any person to treat her with friendship so long as she may deserve the same. In Testimony whereof I hereunto set my hand and seal this 17th day of January 1825 at Princeton." [signed] Hugh McVay.

"On motion of Hugh McVay, who at the January term last of this court recording his Deed of emancipation, by which he set free & emancipated his negro Woman named Iras commonly called Ivy  of dark complexion  aged about forty five years, leave is given him & he enters into and acknowledges bond in penalty of $1000, payable to the Justices of the Caldwell County Court and their successors in office, to keep his negro from becoming chargeable to said county, conditioned according to law, together with Kinson McVay his security and it is ordered that a certificate of freedom be granted said negro woman."  18th April 1825.

Minnie A. and Samuel N. Willhoyt 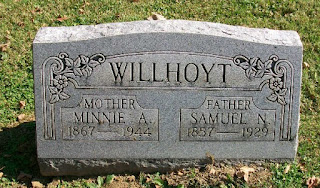 According to her death certificate, Mrs. Minnie Willhoyt was born 13 April 1869 in Henderson County and died 20 August 1944. Her father was listed as Edward Wallace, born Illinois. Her mother's name was unknown.[1]  Her obituary states she was survived by two daughters and two sons. [2]

The death certificate of Samuel N. Willhoyt states he was born 13 April 1859 and died 21 November 1929. His parents were Isaac Willhoyt, born Indiana, and Emma Pruitt, born Kentucky.[3] His death resulted from  being struck by a truck as he crossed a street in Henderson. At the time of his death he was an employee of the Consolidated Textile Cotton Mill Corporation.[4]


Published 14 August 2018, Western Kentucky Genealogy Blog, http://wkygenealogy.blogspot.com/
Posted by Brenda Joyce Jerome at 5:00 AM No comments: Links to this post

A stroll through the Hurricane Cemetery in Crittenden County, Kentucky will show the names of many families who lived and died in the surrounding area. Prominent among those names is Minner. That isn't unusual, though, as the land for the nearby Hurricane Methodist Church was obtained  from Richard Minner, an early area settler, in 1843.[1]  In 1875, Robert H. Haynes gave land for the cemetery,[2] but I suspect the Minner family had already established a burying ground either on or adjoining the Haynes land.  One of the early burials here was for Richard F. Minner, who served in the Union Army during the Civil War. 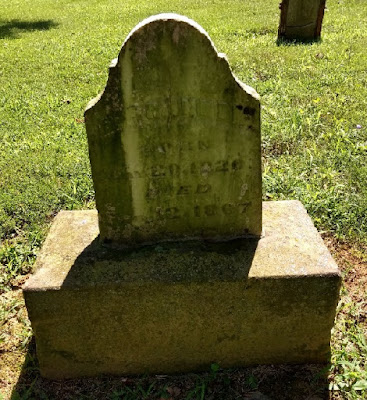 On October 1863 at the age of 43, Richard F. Minner was mustered into Co. E, 48th KY Infantry as a captain at Princeton for one year's service.  The 48th KY Infantry was  composed mainly of men from the western Kentucky counties of Trigg, Lyon, Livingston, Crittenden, Union, Christian, Caldwell, Muhlenburg, Breckenridge and Grayson. [5] On the 26th of February 1864, Minner wrote to the Headquarters of the U.S. Forces requesting 15 days leave to go to Crittenden County about the 10th of March next to attend to business of his father's estate. [6] His father, Daniel Minner,  had recently died.[7] Richard F. Minner was mustered out of service 15 December 1864.

After the war, Minner returned to his life as a farmer in Crittenden County, but his life would end just a few years later. The following newspaper death notice gives the details of his death. "Captain R.F. Minner, late of the army, was caught in a mill wheel in Crittenden county, a few days ago, his arm broken in several places, and his ribs severed from the back bone. He lingered until Monday night last, and died in great agony. The accident occurred at Mr. Wilson's mill."[8]

Minner was laid to rest in Hurricane Cemetery near the graves of his parents, his first wife and several of his infant children. 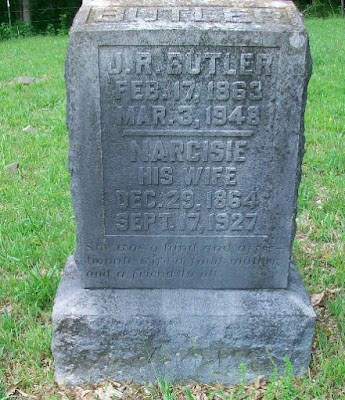 She was a kind and affectionate wife,  a fond mother, and a friend to all.

According to  his death certificate, James Robert Butler was the son of Jim Butler, who was born in Tennessee. His mother's name was unknown. The informant named on the death certificate was his wife, Alice Butler.[2]

Narcissus Walker was the daughter of Lewis Walker and Mary Goober/Gober, who had married 10 June 1858 Rutherford County, Tennessee. [3]  Narcissus died at the age of 63 years, 8 months and 18 days.[4]

An Interesting Family ... What?

I have read a lot of obituaries  in my research and it always causes me to pause and wonder what is meant by the decedent having an "interesting family."  Was the family so ordinary that it was a struggle to find something positive to say or was the family so strange it was difficult to find something nice to say about them?  I don't know the answer.  Do you?  Here is an example of an "interesting family."

"Death of a Well-Known Kentuckian - Many of our citizens will be pained to learn of the death of Mr. John N. Sutcliff, of Marion, Crittenden County, Ky., which melancholy event transpired on Wednesday last, at his home in Crittenden County.  His disease was an affection of the spine and inflammation of the bowels.  Mr. Sutcliff was well know [sic] to many  of our citizens, by whom he was highly esteemed.  He was a large-hearted, genial, social gentleman, and made many warm friends.  He leaves an interesting family, who have the warmest sympathy of the many friends of the deceased in this dark hour of their affliction." [1]

Published 2 August 2018, Western Kentucky Genealogy Blog, http://wkygenealogy.blogspot.com/
Posted by Brenda Joyce Jerome at 5:30 AM No comments: Links to this post