The following information has been abstracted from the common school report found in Biennial Report of the Superintendant of Public Instruction of Kentucky, 1907. Teachers leaving their profession for more lucrative occupations was a problem just as it is today.
Smithland, Ky., October 24, 1907
The schools of Livingston county have been progressing nicely the last two years and results have been very satisfactory. The most impending danger confronting the schools now is the threatening desertion on the part of teachers from the teaching profession. Some of our best teachers are beginning to look elsewhere for better pecuniary rewards. The demands for young men and ladies of ability in other vocations are too great for teachers of rural schools to be contented with their present salaries.

The school population of Livingston county is on the decline, there being several hundred fewer pupils in the county now than a few years ago. The decline has greatly affected many of our rural schools, reducing them to the "pauper" classification. We have too many school districts, more than the number of pupils justify, and how to remedy the situation is a problem. Educational enthusiasm, however, is not on the decline. We had had a new graded school established this year, making a total of five in the county; we have had 53 common school graduates and four high school graduates; we have had our full quota at the State Norman and expect a good representation there again in the spring. We have by two students at the State College now.

The first and most important proposition confronting the schools today is how to secure more funds - better wages for teachers. We need to keep the teachers of experience in the profession.

In conclusion I must say that I believe there are better days ahead for our schools ...


Co. Supt. Livingston County.﻿
Posted by Brenda Joyce Jerome at 3:02 AM No comments: 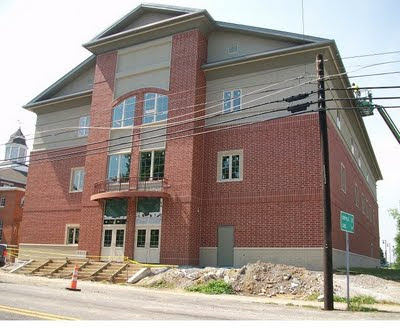 The new Livingston County Office Building, which will contain the County Clerk's Office, other county offices and a public library, is nearing completion. It is scheduled to open in September 2011. The above photo was taken this morning. It is located next to the old county courthouse on Court Street in Smithland. 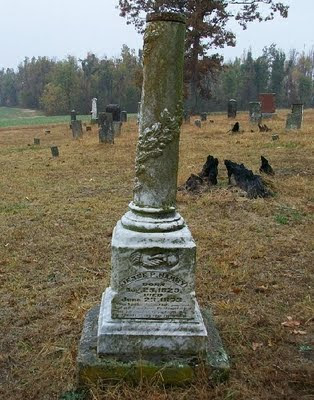 Posted by Brenda Joyce Jerome at 2:22 AM No comments:

In 1912, Kentucky began awarding pensions to men who were veterans of the Confederate army. On 18 May 1914, indigent widows of Confederate soldiers became eligible for pensions. One copy of the application was sent to the Confederate Pension Office in Frankfort, Kentucky and one copy was retained in the county courthouse. The following record has been abstracted from the copy in the Caldwell County, Kentucky Clerk's Office.

Mrs. Blackburn owns 120 acres of poor land and one old horse. Her family consists of herself and Virgil Blackburn.

Joseph Boitnott and J.W.M. Morse stated they have known Martha P. Blackburn 50 years and she has resided in the northern part of Caldwell County all her life. They also knew her husband about 50 years and enlisted with him in the fall of 1861 in J.K. Hughes' Company of the 1st Kentucky Cavalry. On 16 February 1862, James E. Blackburn was captured at Fort Donaldson.


Posted by Brenda Joyce Jerome at 2:53 AM No comments: 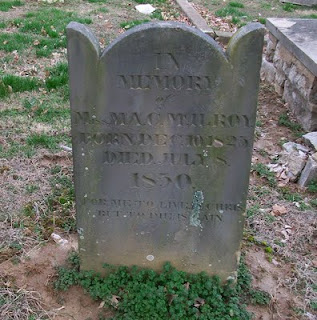 
For to me to live is Christ


and to die is Gain


The intriguing tombstone was photographed in Cedar Hill Cemetery, Princeton, Caldwell County, Kentucky 23 March 2011. Note the dot (period) after each word or number. The epitapth is scripture from the Phillippians 1:21.﻿

Posted by Brenda Joyce Jerome at 2:38 AM 2 comments:

The following information has been taken from Kentucky: Its Resources and Present Condition, 1878.

The year 1798 is memorable in the annals of Kentucky ... it was then that this county, amidst more than a dozen others, was brought into existence, and named in honor of Robert R. Livingston. It was cut off from the extreme western part of Christian (which then extended to the Ohio River), and is now bounded on the north by the Ohio river, which separates it from Illinois, and by Crittenden county, on the east by Crittenden and Lyon, south by Marshall and McCracken, and west by the Ohio river.

Navigation and Railways - The Ohio river forms the west and north boundary, the Tennessee river the southern boundary, and the Cumberland the eastern boundary for about one third of its extent, and then runs centrally through the county. These three streams afford means for perpetual steamboat navigation to every neighborhood in the county. The Louisville and Southwestern Railroad passes through the eastern border ... thus no part of Livingston is wanting in traveling or transportation facilities.

Agriculture - Corn, wheat, oats, rye, flax, the hay grasses, and tobacco, all grow luxuriantly, and seldom fail of making good crops. Cotton is cultivated to a limited extent for home use, and peanuts are becoming quite a crop of profit. The tobacco of this county is sold at Paducah and Louisville, and makes up some of the best shipping leaf that goes into this market.

Towns - Smithland, the county seat, is located at the mouth of Cumberland river, where it empties into the Ohio. It contains some seven to eight hundred inhabitants, a good court house and other public buildings, several churches and mechanic shops, and many well built private residences.

Salem is a beautiful ﻿town of some 300 inhabitants.

Churches - The Methodist, Baptist, Presbyterian and Catholic are the principal religious denominations. The church buildings are generally primitive in their architecture, but sufficiently elegant to suit the tastes of the true Christian who worship in them.

Schools - There are several good private schools in the county in addition to the free public primary schools. The people are every year becoming more and more interested in the public school system.

Domestic Arts - While the male portion of the population are attending to the farms and live stock, the energetic and frugal females are employed in attending to the domestic affairs of housekeeping and the manufacture of cloth for the every day wear of the family. Jeans, linseys, linens, cottonades, blankets, counterpanes and other useful articles are woven on the old-fashioned hand-looms.

The People - Like other agricultural communities in Kentucky, the citizens of Livingston are energetic, careful, and saving, remarkably intelligent and hospitable, and well aware of the fine natural resources of their county and are anxious to have other persons from distant States and countries to come and settle among them, and share their rich lands and other benefits. To all such they will give a most hearty welcome.
﻿Copyright on text and photographs
by Brenda Joyce Jerome, CG
Western Kentucky Genealogy Blog
http://wkygenealogy.blogspot.com/ 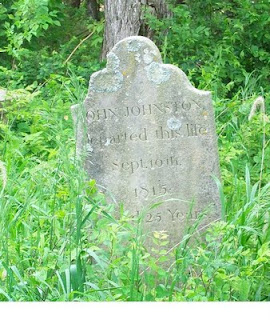 
This tombstone is located in the back part of Hill Cemetery, along with other older tombstones. The front part of the cemetery has been mowed, but the back part had not when this visit was made.

Posted by Brenda Joyce Jerome at 2:24 AM No comments:

Posted by Brenda Joyce Jerome at 3:04 AM No comments:

Chas. V. Bonnell
Co. A
65 Ind. Inf.
Buried Fernwood Cemetery, Henderson County, Kentucky. Tombstones photographed 2 July 2011.
According to the death certificate of Charles V. Bonnell, he was born in New Jersey and died 9 March 1917. His parents were Charles Bonnell, born New Jersey, and Sarah Quick, born Illinois.
Charles V. Bonnell's obituary appeared in the Henderson Daily Journal on Saturday, 10 March 1917. It stated the following:
"Death at 11:45 o'clock Friday morning claimed C.V. Bonnell, aged 69, Union soldier, who served in the Sixty-fifth Indiana Infantry during the civil war, at the home of his son on Ingram street. For many years Mr. Bonnell served as postmaster at Geneva and lived in Henderson county since the war. He is survived by three sons, William, C.L., and Ralph Bonnell, and two daughters, Mrs. W.C. Boivine and Miss Ada Bonnell, all of the city. The funeral services will be conducted this afternoon from the residence by Rev. W.P. Baird, pastor of the First Methodist church, and Rev. Montgomery. Interment will be in Fernwood cemetery."
In addition to the government-supplied tombstone above, there is a tombstone for Bonnell and his wife.
Tombstone of Chas. V. and Ella Bonnell
Fernwood Cemetery
Henderson, Kentucky﻿
Copyright on text and photographs
by Brenda Joyce Jerome, CG
Western Kentucky Genealogy Blog
http://wkygenealogy.blogspot.com/
﻿
Posted by Brenda Joyce Jerome at 2:57 AM No comments:

Happy Birthday, America!
Posted by Brenda Joyce Jerome at 8:10 AM No comments:

Ancestry.com  is offering a Free Access Weekend to Sons of American Revolution Membership Applications through July 4th. There are 145,00 applications included in the collection dating from 1889 to 1970.
Posted by Brenda Joyce Jerome at 2:03 AM No comments: