What better way to get a sense of the business and social climate of an area than to read the newspaper advertisements?  The following advertisements have been gleaned from the 20 January 1853 issue of the Democratic Banner of Henderson, Kentucky. This issue of the Banner is available in the Henderson Public Library and also on Newspapers.com

Administrators Notice - Notice is hereby given to all the creditors of Benjamin F. Hardwick, Dec'd, to produce to the undersigned Administrator of said Dec'd, or to file with the presiding Judge of the Henderson County Court, their claims against the said Benj. F. Hardwick Dec'd  ... on or before the 8th day of January next, when a settlement of the matters of the Administration will be made. The assets are not sufficient to pay all the debts, and the claims not presented by the day aforesd., will not be paid, nor any part of them this 7th December 1852.  [signed] S.L. Drewry, Admr.  December 9, 1852

Life Insurance - The undersigned is Agent for the Kentucky Mutual Life Insurance Company, and will insure both Whites and Slaves, upon the most favorable terms.  P.H. Hillyer, Agent.   R.P. Letcher, Medical Examiner.

F. Millet, Merchant - This gentleman has removed to his new store rooms on the north side of Mill Street where he will keep on hand a general assortment of goods in his line.

Negros [sic] For Sale - On the 24th inst. (county court day) I will expose for sale at the court house door in the town of Henderson, four negroes, a woman and three children. The two youngest children will be sold with the mother as I am unwilling to separate them. A credit until June next will be given. Bond with approved security will be required.  [signed]  John B. Cabell

W.R. King - The report of this gentleman's death is no doubt false ... he has arrived at Havana in improved health.

Particular Notice -  The undersigned, desirous of closing out his business in this place, offers his well selected stock of ready-made Clothing and furnishing goods at very low prices. His stock consists, in part, of Coats, vests, pants, drawers, shirts, sacks, cloaks, &c. of every  style and quality; hats, caps, shoes, boots, &c. On Saturday, the 20th inst., I will commence  SELLING OFF AT COST, and on Saturday the 27th I will commence selling  AT AUCTION. All sums of $5 and under cash at hand - over $5 credit until the first of March, good security required. Country merchants will find it to their interest to call at the auction sales every Saturday. I hope those who may read this may give me a call and satisfy themselves that my word is NO HOAX.  [signed] S. Bissinger.

For Sale - Two good work horses (one rode well) either works well in single or double harness or in ploughing.  Having bought a pair of mules for my purpose, have no use for the horses. Call at the Louisville Furniture Rooms, Main Street.  [signed] C.H. Woolford. 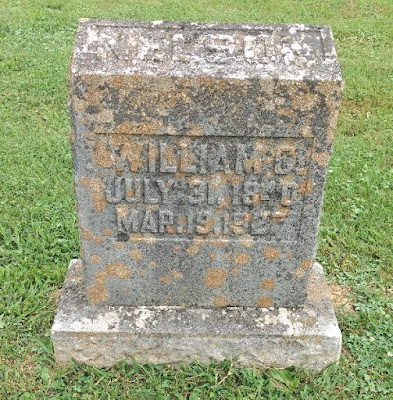 According to his death certificate,[4] William C. Nelson was born 18 July 1840 and died 19 Mar 1928. His parents were listed as William Nelson and Eliza May, both of whom were born in Livingston County.


Published 24 Sep 2019, Western Kentucky Genealogy Blog, http://wkygenealogy.blogspot.com/
Posted by Brenda Joyce Jerome at 6:00 AM No comments: Links to this post

How long African American and white marriages were recorded in separate books depends on the county. In Livingston County, separate books were used through 1916. In Caldwell County, marriages were recorded separately through June 1968. An African American marriage bond often has less personal information than what is found on a white marriage bond.

The following African American marriage records for 1872 can be found in Livingston County Marriage Register for Freedmen 1866-1896 and Bond Book 1A. Several abbreviations were used in the entries below. B: is the person (bondsman) who signed the marriage bond with the bridegroom.  Wit: refers to the witnesses to the marriage ceremony. The abbreviations and numbers at the end of each entry refer to the source and page number. For example, Reg: 32-33 refers to Register pages 32 -33 and BB1A:155 refers to Bond Book 1A, page 155.

To be the best genealogist possible, there are several research guidelines and rules we should follow. To disregard them shows we either do not know how to properly do research or we do not care. The following rules are among those most often disregarded.

1.  Genealogists are taught that every fact not within common knowledge must be substantiated with a source.  Using proper source citations demonstrates your knowledge of what constitutes proof for each fact and where it can be found. Not citing your sources is asking people to read your mind to learn where you found your material. I don't know anyone who has that ability.

2.  "Borrowing" material from other genealogists without giving them credit is not acceptable - anytime. This applies to family group sheets prepared by others, family trees on Ancestry.com, photographs taken by another person, family histories written for family reunions and, yes, blog posts. The rule of thumb is this: If you didn't write it, it isn't yours and you should not use it without permission. If permission is given, be sure to give credit to the person who did write it.

There are many rules in genealogy, but the two listed above are ones that are consistently disregarded.   Be a responsible genealogist, cite your sources and give credit to others for their work.

Roster of Men Who Died in World War I - Henderson County

In 1919, the names of Kentucky soldiers who lost their lives during World War I were published in several newspapers, including the Louisville Courier-Journal, the Hopkinsville Kentuckian and the Owensboro Messenger. The deaths from disease were mainly caused by the influenza epidemic of 1918 - 1919. Of the 2,726 men who died during the war, 1,501 died from disease while 734 were killed in action and 305 died of wounds.

*  Henderson Family Has Two Gold Stars, Henderson, Ky, Dec. 3 - A telegram reached here yesterday stating that George Marynell, of the 7th U.S. cavalry had been drowned. The death of young Marynell is especially distressing because it is the second gold star for the Marynell home in a few weeks. The other soldier son to pass away was Lonnie Marynell, who died of pneumonia at camp. He is survived by his parents, Mr. and Mrs. F.A. Marynell and four brothers. [Owensboro Messenger-Inquirer, Tues., 3 Dec 1918, p. 4]

*  Lieut. Worsham Won French War Cross, Henderson, Ky., Oct. 3 - The name of Lieut. Arch Dixon Worsham appears in the list of officers and men who were awarded the French Croix de Guerre for heroism on the battlefield. Lieut. Worsham lost his life on July 31, while leading a patrol against the Germans in No Man's Land. He is the first Henderson officer to have made the supreme sacrifice, and the medal given him will be sent to his mother, Mrs. A.J. Worsham, of this city. [Princeton, Indiana Daily Clarion, Thurs., 3 Oct 1918, p. 4] 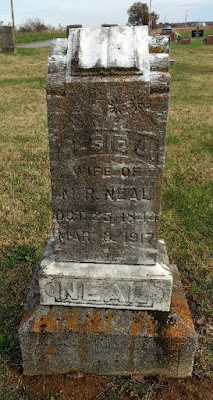 According to her death certificate,[1] Elsie Jane Neal was the daughter of Johon [sic] B. Parsons, born North Carolina, and Sinthania Powell, born Tennessee.

Elsie J. Parsons married Mason R. Neal 18 June 1865 Jackson County, Illinois.[2] They were enumerated on the 1910 Livingston County census.[3] At that time Elsie and M.R. Neal had been married 45 years. Elsie had given birth to six children with three still living.


Published 10 Sep 2019, Western Kentucky Genealogy Blog,  http://wkygenealogy.blogspot.com
Posted by Brenda Joyce Jerome at 6:00 AM No comments: Links to this post

For a long time it has been a custom for families to gather around the burial sites of loved ones on certain days to pull weeds and trim the grass. Many families gathered in cemeteries around Memorial Day, but at other times and in other locations the gatherings were in late summer.  In addition to the physical work, it was a time to reminiscence about the past, but it was, also,  a time to whisper or talk openly to our deceased family members.  If we talked to dear departed Aunt Molly while in a public place, we would run the risk of someone thinking we were "tetched" in the head and call a doctor,  but it was perfectly fine to talk to her while pulling weeds around her headstone.

In order to do a thorough cleaning job, certain tools were needed - grass clippers or shears and, of course, every lady needed a pair of old gloves to protect her hands. If flowers were being planted, they were carried in a large coffee can, along with a gallon jug of water.

At noon, it was time to have dinner, sometimes followed by a sermon by the local minister and a quartet singing gospel hymns.

I love the newspaper notices of graveyard cleanings.  In 1897, an article about the cleaning of Mt. Zion Cemetery in Crittenden County appeared in a local newspaper.  The article stated that cleaning occupied the morning and, at noon, dinner was spread on the ground. In the afternoon, religious services were held and everyone participated in prayers and songs. Making an address was Uncle Highly Gilbert, who had assisted in digging the first grave at Mt. Zion and had lived to see more than 400 other graves dug in the cemetery. Among those buried in Mt. Zion are Ryland Heath, Col. Wm. Hughes, Chapel Nunn, Chesley Nunn, Dr. M. Bristoe, Wm. and Jack Will and many others.[1]

Below is one of my favorites articles notifying people of an upcoming cemetery cleaning. 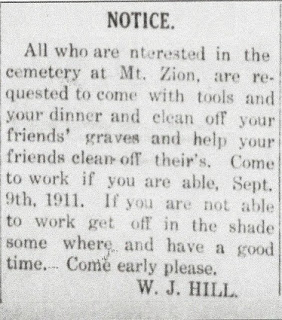 If you read county or small town newspapers, you will surely see notices of cemetery cleanings. It is a wonderful way to honor our deceased loved ones and also a great way to learn about our family history.


Published 3 Sep 2019, Western Kentucky Genealogy Blog, http://wkygenealogy.blogspot.com/
Posted by Brenda Joyce Jerome at 5:30 AM No comments: Links to this post