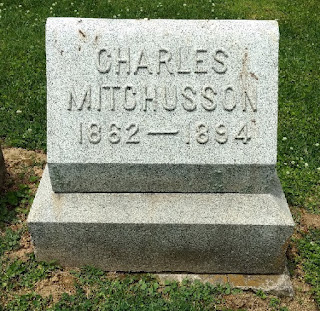 On the 1880 census, Charley Mitchusson, age 18, is listed as the son of Ning and Maria Mitchusson. Also in the household are daughters, Mary, age 12; Bessie, age 9 and Maggie, age 5.[1]  On that census, Charley was listed as born in Kentucky and currently  "at school."  Unfortunately, Charley died as a young man. His obituary shows that  he was "of fine business qualifications and was for several  years a prominent merchant tailor of Henderson."  He left a young wife to mourn his loss.[2]

Buried next to Charles in Fernwood Cemetery, Henderson, Kentucky, is his sister, Bess Mitchusson, who was born 19 July  1870 and died 15 March 1940. According to her death certificate, she was the daughter of N.E. Mitchusson, born in Caldwell County, Kentucky,  and Maria Rudy, born in Henderson. Her occupation was listed as "clerk." [3] 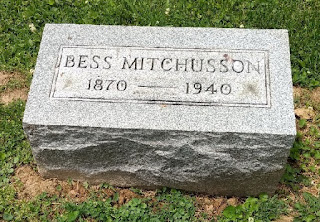 Bess Mitchusson left a will dated 4 March 1940 and it was admitted to probate 25 March 1940. The  executrix of her estate was her sister, Margaret Rudy Johnson.[4]


Published 29 August 2019, Western Kentucky Genealogy Blog, http://wkygenealogy.blogspot.com/
Posted by Brenda Joyce Jerome at 5:30 AM No comments: Links to this post

From Kentucky to Evansville 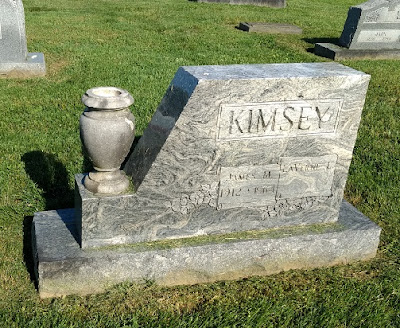 James M. Kimsey and his wife, Louise L., were living on West Gum Street in  Marion, Crittenden County  in 1930, not long after they were married.[1]  By the time James M. Kimsey registered for the World War II draft on 16 October 1940, he and his wife were living on Harlan Avenue in Evansville, Indiana and he was employed by Ideal Pure Milk Company.  His physical description was as follows:  5 feet 4 inches tall, weight 124 pounds, gray eyes, brown hair and light complexion. [2]

In 1950, Kimsey was recorded as a factory worker at American Dairy. [3] According to his death certificate, he was the son of Charles Kimsey and Henrie Brown.[4]  He had worked for American Dairy 15 years and was a member of Central Methodist Church. Survivors included his wife, LaVerne, a son and a sister.[5]

LaVerne Louise was born in Sikeston, Missouri 16 October 1913 and was reared in Crittenden County, Kentucky. She married James M. Kimsey in June 1929. During the years of World War II, she worked at the Evansville Ship Yard, Chrysler and Servel in the production of LST vessels, ammunition and aviation components. She also managed several businesses in Kentucky and Evansville. Several  years after the death of James M. Kimsey, LaVerne was married to B.C. Jernigan from 1973 until his death in 1998.[6]


Published 22 Aug 2019, Western Kentucky Genealogy Blog,  http://wkygenealogy.blogspot.com/
Posted by Brenda Joyce Jerome at 5:30 AM No comments: Links to this post 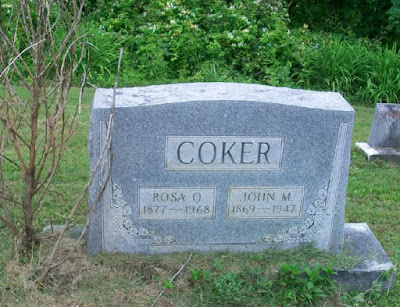 John M. Coker and his wife "Rosie," along with two adult daughters and six grandchildren, were living in Bells Mines area in 1940.[5]

Written in Stone, But Still Wrong

William Shewmaker and Mary "Polly" Adams were my 3rd great-grandparents. They married 29 August 1809 in Caldwell County, Kentucky and sometime between 1820 and 1830 they migrated across the Ohio River and settled in the part of Pope County, Illinois that is today Hardin County, Illinois.

Buried next to William and Polly Shewmaker in Lavender #1 Cemetery  is a daughter, Mary.  Very little is known about Mary except she never married and  lived with her parents all her life. According to her tombstone,  Mary, age 66,  died 8 November 1882, just slightly more than a month before the death of her mother, who died 27 December 1882. 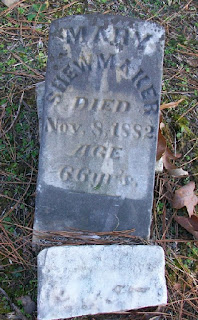 Because the death dates  of Mary and her mother, Polly, were so close, I had wondered if there was an epidemic of some disease in the area, but I found nothing to indicate that to be true. Nevertheless, I kept on looking and just recently while reading old issues of the Hardin County newspaper guess what was found -   a death notice for Mary Shewmaker, who died 8 November 1881, age 67 years, 7 months and 7 days. [1] The death date on her tombstone was off by a year!  The death notice would have been generated shortly after Mary's death and carries more validity that a tombstone that may have been created long after her death.

I think it is safe to say that just because a date is written in stone, it is not necessarily true. I am happy to have verification of her date of death.


Published 15 Aug 2019, Western Kentucky Genealogy Blog,  http://wkygenealogy.blogspot.com/
Posted by Brenda Joyce Jerome at 5:30 AM No comments: Links to this post

Dycusburg, Crittenden County, Kentucky has suffered from three devastating fires, any one of which could have been a death knell for the town.  Instead, the citizens who lost their businesses and/or homes hung on and rebuilt.

The first fire began shortly after 3 a.m. on a June morning when the residence of Mrs. J.H. Clifton, widow, was discovered in flames. Mrs. Clifton and her two daughters lost most of their clothing and personal possessions.

Others losing their businesses or residences were Brown & Dalton, loss of stock;  E.M. Dalton, lost his house; S.H. Cassidy & Co., lost a tobacco factory and also Cassidy's  residence and contents; Brasher & Campbell, merchants suffered a loss of their stock; Decker's Livery Stable; J.B. Wadlington's residence was lost, as was that of Obe Simmons and Griffin & Wells lost a warehouse.  [1]

Slightly more than a year later, on the morning of July 16, 1907, Dycusburg had another destructive fire. Griffin & Wells, whose warehouse had suffered a loss estimated at $500 in 1906, again had fire damage. Others suffering losses in 1907 were Dr. Phillips, O. Boaz, G.A. Decker, W.L. Bennett, J.C. Bennett, People's Bank, the Dycusburg Hotel, Gregory's Livery Stable, Ed Lowery's store and residence and J.L. Hills' residence and its contents. [2] Only two business house were left after the fire. Although the fire of 1907 finished off what was left after the fire of 1906, no one was hurt. The losses from the 1907 fire totaled $50,000 with only about $11,000 insurance coverage.[3]  Most of the buildings were of frame construction, which caused the fire to spread quickly from one building to another.

Probably the greatest victim of the fire of 1907 was People's Bank of Dycusburg. The stockholders and directors met on 27 July 1907 and adopted several resolutions, which resulted in liquidation of the bank.  The bank building and practically the entire town was destroyed by fire, which hindered the future business prospects of the bank. The bank had never obtained as large a business as had been hoped for and, since the bank affairs were favorable to liquidate and the assets were well secured, it was decided to liquidate the bank.  The resolutions were signed by Charles Smith,  Bank President; Edgie Gregory, Cashier and James Ramey, Agent and Attorney for the Bank.[4]

The third fire in Dycusburg  began in the early morning of 22 November 1954 and two-thirds of the business district was lost. The fire began in Mrs. Marguerite Bennett's grocery store. At one point, the fire leaped across the street and ignited the large general merchandise store of Fred Joyce and the garage of Robert Dycus.  Left standing were the post office, Masonic Lodge and Frank Dycus' grocery.[5]

As in the previous fires, all of the businesses were frame buildings. Only three buildings remained after the fire with losses estimated at $100,000.[6]


Published 7 Aug 2019, Western Kentucky Genealogy Blog, http://wkygenealogy.blogspot.com/
Posted by Brenda Joyce Jerome at 5:30 AM No comments: Links to this post

On the 153rd anniversary of the marriage of my great-grandparents, I am re-publishing a post marking their anniversary from three years ago. Since that post was published, several of us who descend from this couple have had a tombstone erected to mark the burial place of Mary Ann. Research on Reddick and Mary Ann continues.


On this day 150 years ago, Mary Ann Wolstenholme and Reddick Smith stood before Henry Holt, a justice of the peace, and promised to love, honor and cherish each other for the rest of their lives. There were no guarantees their lives would be easy and hardships were almost certain.

Born in 1842 in Gallatin County, Illinois, Reddick Smith enlisted in Co. F, 131st Illinois Volunteer Infantry. After leaving a hospital in Millikin's Bend, Louisiana without permission, he was captured by the Confederates and sent to Richmond, Virginia before being paroled in July 1863. Later he enlisted in Co. G, 6th Illinois Cavalry and participated in the Battle of Nashville on 15 December 1864. After the war, Reddick left his company in Alabama and returned home to southern Illinois. Yes, he deserted again. The charge of desertion was later removed from his records by the War Department.

Reddick settled in Goodlettsville, Davidson County, where Mary Ann was living. On 2 August 1866, he used a coin and hammered it over a rod to form a ring and placed this ring on Mary Ann's finger.  I wear this ring today.

Reddick and Mary Ann stayed in Tennessee until after 1870 and then moved with their three children, Rebeckah, Edna and Susannah,  to Hardin County, Illinois. Except for a brief stay in the state of Washington in the early 1900s, the Smith family remained in Hardin County. Reddick died there 14 April 1913 and Mary Ann died 7 January 1933. Both are buried at Central Cemetery.

Reddick and Mary Ann are among my favorite ancestors and have been the most interesting to research. One of my current projects involves getting a Tombstone to mark Mary Ann's grave.

Posted by Brenda Joyce Jerome at 10:32 AM No comments: Links to this post

In the absence of a will or death certificate, the date an administrator of an estate was appointed is a good way to determine the approximate date of a person's death.  However, if the decedent owned no property at the time of his death, there would be no estate to be settled.  When an administrator was appointed, he/she had to sign a bond with at least one other person signing as security for the faithful performance of his duties as administrator. The following information has been abstracted from Livingston County, Kentucky Court Order Books S (May 1898-May1902) and T (May 1902-Feb 1906) and Administrator's Bond Book C (Mar 1886-Dec 1905). The letters and numbers at the end of each entry show where the information is located. For example, OBS:584 designates Order Book S, page 584.  BBC:305 designates Administrator's Bond Book C, page 305. 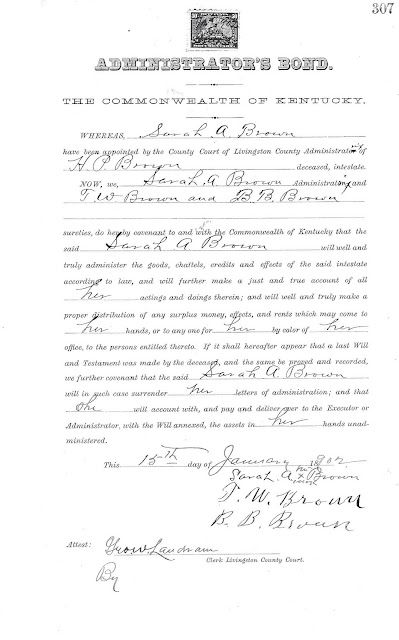 Published 1 Aug 2019, Western Kentucky Genealogy Blog,  http://wkygenealogy.blogspot.com/
Posted by Brenda Joyce Jerome at 5:30 AM No comments: Links to this post