Newspapers of larger cities often contain information on nearby smaller towns. The Evansville, Indiana newspapers regularly published articles on western Kentucky towns, including the following article on Marion, Crittenden County, Kentucky. This article appeared in the Evansville Press on Sunday, 8 May 1927.

The townspeople point with pride to Marion as the home of two United States senators, the late Ollie M. James and W.J. Deboe.

One of its native sons [Lee Cruce] was the second governor of the state of Oklahoma.

The farmers raise mostly corn and livestock. The town owns part of the water and light plants.

The Crittenden courthouse at Marion was burned down by General Lyon in the Civil War.[1]

The first railroad was built in 1886 and practically destroyed by fire in 1905 and 1909. The new school, community auditorium and library, Fohs Hall, was dedicated in October 1926.

[1] It was more likely guerrillas were responsible for burning the courthouse.

Published 30 April  2015, Western Kentucky Genealogy Blog, http://wkygenealogy.blogspot.com/
Posted by Brenda Joyce Jerome at 4:00 AM No comments: Links to this post 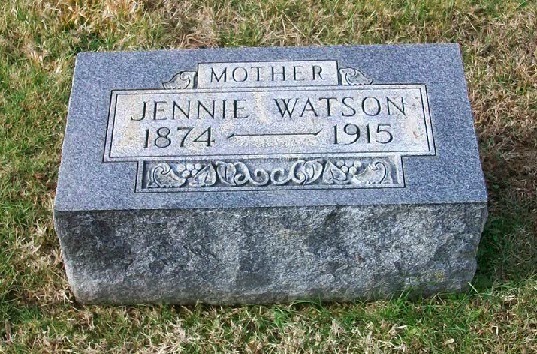 According to Kentucky death certificate #30909, Jennie Watson was born 29 August 1874 Kentucky and died 12 December 1915. She was the daughter of Tom Hardin and Nellie Barrett, both of whom were born in Kentucky.

Jennie Hardin is listed as the youngest child (age 6) in the household of Thomas F. and Nellie A. Hardin on the 1880 Crittenden County, Kentucky census in Hurricane Precinct.

Published 28 April 2015, Western Kentucky Genealogy Blog, http://wkygenealogy.blogspot.com/
Posted by Brenda Joyce Jerome at 3:30 AM No comments: Links to this post

Old Time Sayings - Are They Part of Your Heritage?

Many of us grew up hearing odd sayings from our parents and grandparents. Taken literally by outsiders, they usually made little sense, but to those of us living in the South or had parents from the South, they were perfectly understood.

My grandmother Joyce had several she would pull out when the occasion warranted. Many of these sayings pertained to the weather. If the sky was getting dark, she would say, "It's coming up a cloud."  Other times she would recite the following: "Red sky at night, sailor's delight. Red sky in the morning, sailor take warning." I wonder how accurately the sky can predict the weather.

If Grandma was planning to do something, she always added the word " fixing." In other words, if she was going to town, she was "fixing to go to town" and she might add the word "dreckley" to the end of the sentence to tell when she was going. Now, Grandma lived very little in the South, actually just a few months were spent in Arkansas. The family was there just long enough for my father to be born in January 1913. Then they returned to Hardin County, Illinois, just across the Ohio River from Crittenden County, Kentucky and Hardin County's population included many folks from the other side of the river. Also, her mother, Mary Ann Wolstenholme Smith, was born in Davidson County, Tennessee so perhaps those old sayings came from her.

Another one I have heard - not from Grandma, but from a Kentucky friend. Describing someone who is contrary and hard to get along with is said to be "meaner than a junkyard dog."

Are there sayings in your family that have been passed down to your generation? Do you use them, too?

Posted by Brenda Joyce Jerome at 4:00 AM 7 comments: Links to this post

Almost every spring the rivers overflow, sending water to uncomfortable heights. So far, the rivers aren't as high as they have been in the past. When you live along a river, however, you keep an eye on it to make sure it behaves. 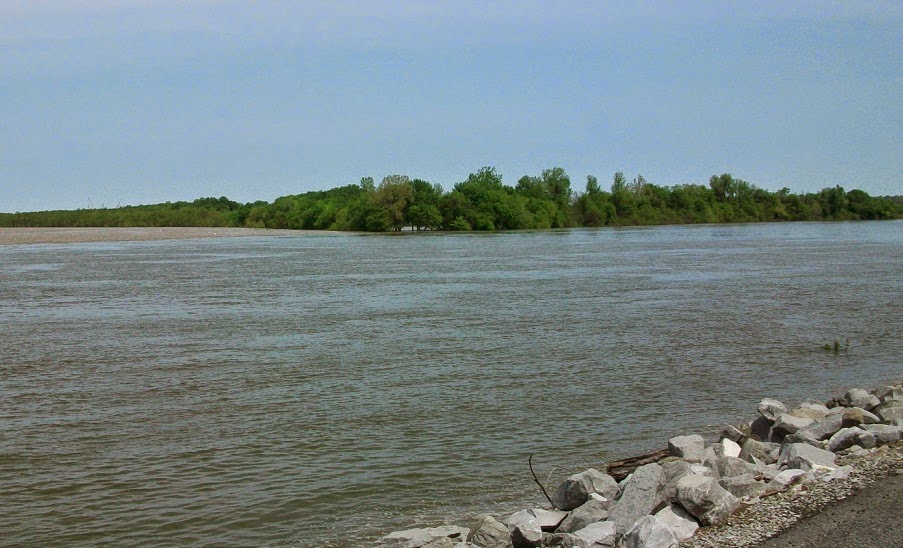 The Point from the river bank at Smithland 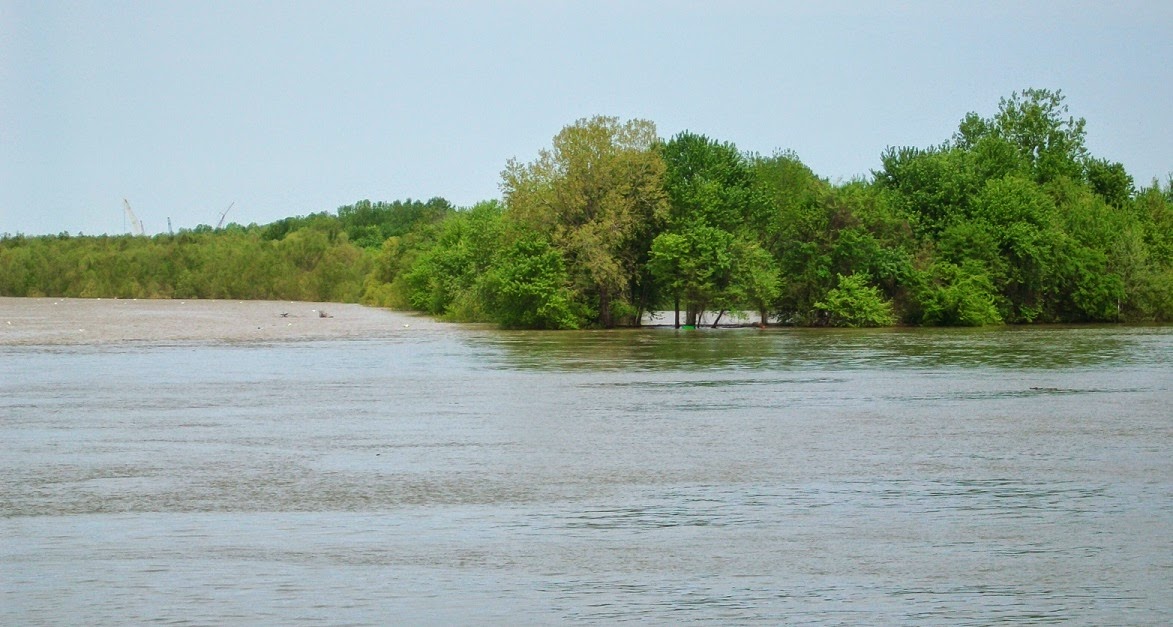 A closer look at The Point.
Note the muddy Ohio River separating itself from the Cumberland River.
Photographed 22 April 2015.

Posted by Brenda Joyce Jerome at 2:00 AM No comments: Links to this post 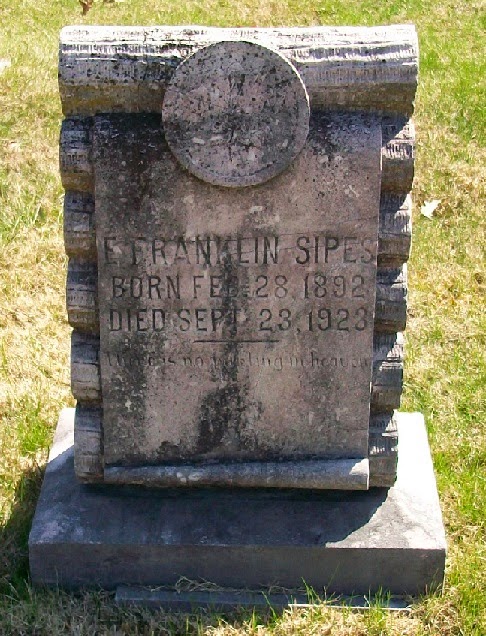 According to his death certificate #26969, Frank Sipes died 25 September 1923 in Providence, Webster County, Kentucky. He was the son of J.W. Sipes and Nancy E. Bean and is shown with his parents on the 1910 Caldwell County, Kentucky census.

Published 21 April 2015, Western Kentucky Genealogy Blog, http://wkygenealogy.blogspot.com/
Posted by Brenda Joyce Jerome at 3:00 AM No comments: Links to this post 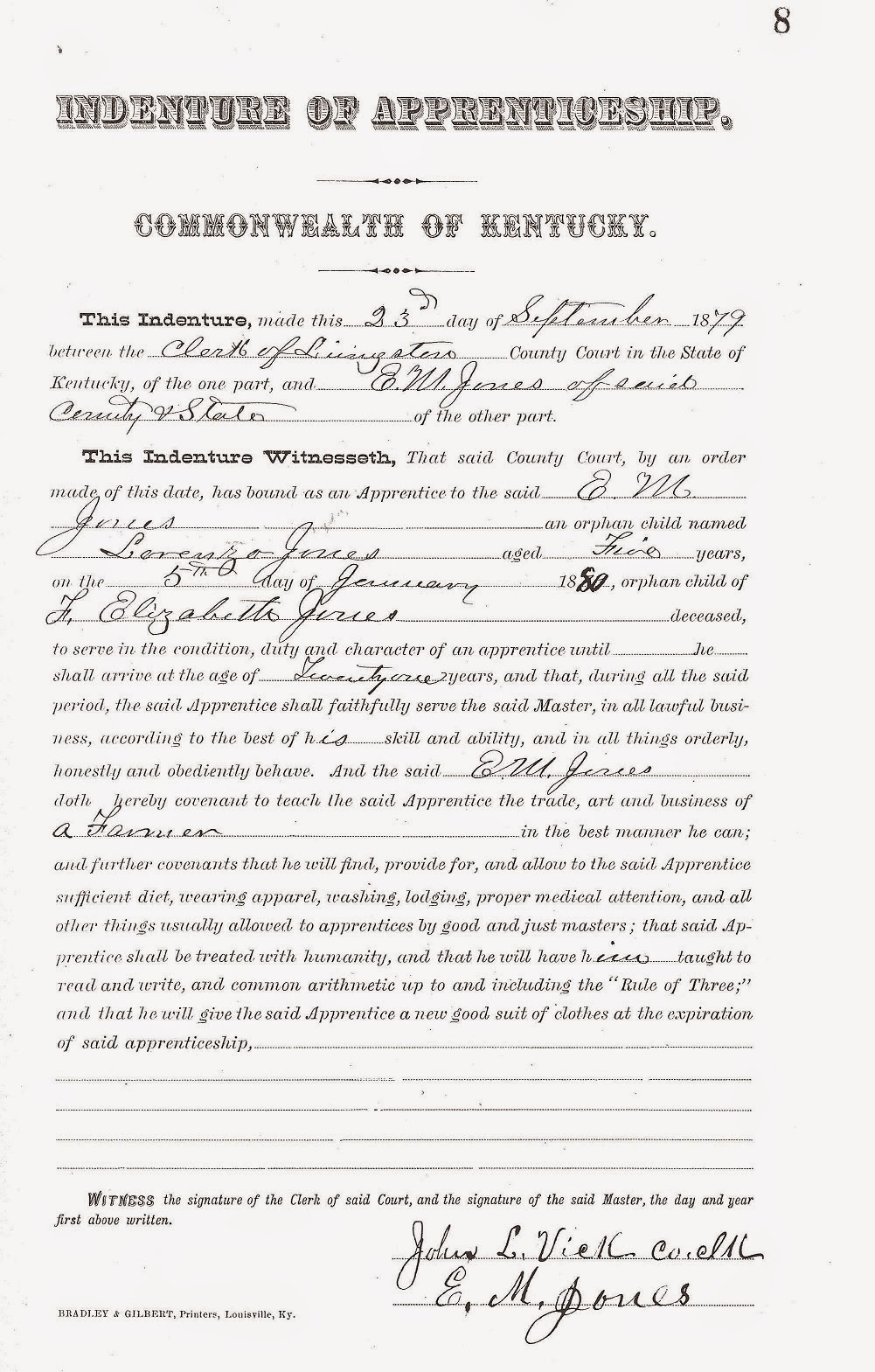 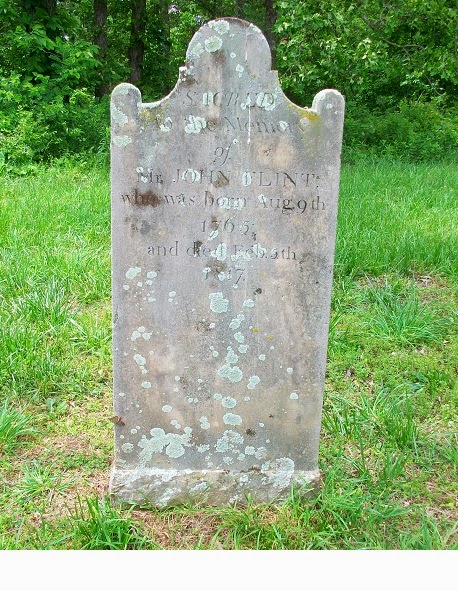 There were two men named John Flint who lived in the area at the same time, causing quite a bit of confusion. The above John Flint died first. The inventory of his estate is dated 5 Marcy 1817 with Hugh McVay, Wm. Ford Senr., and William Johnson as appraisers.[1]  The other John Flint left a very detailed will dated 23 November 1819. The appraisers of his estate were John Craig, Elijah Stevens and Tacy Cooper.[2]

Posted by Brenda Joyce Jerome at 2:30 AM No comments: Links to this post

Col. E.L. Starling, age 70, died at his home in Henderson 15 May 1910. He was survived by his wife, Mrs. Mary B. (Stewart) Starling  and seven children, five of whom lived in Henderson and two who lived at a distance.

Col. Starling was highly regarded as a writer in western Kentucky, having been owner of the Reporter and managing editor of the Henderson Gleaner.[1]  He also served as mayor of Henderson twice and was responsible for the building of the city water works. He was a veteran of the Civil War. Col. Starling is also well known to genealogists as the author of Starling's History of Henderson County, Kentucky. 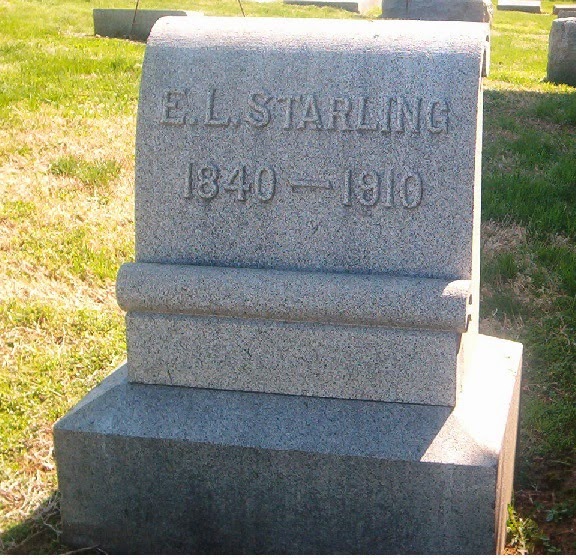 Published 7 April 2015, Western Kentucky Genealogy Blog, http://wkygenealogy.blogspot.com/
Posted by Brenda Joyce Jerome at 3:00 AM No comments: Links to this post 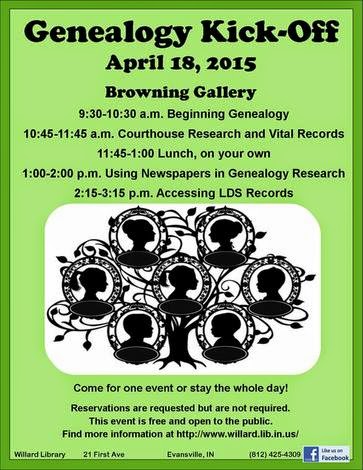 Published 4 April 2015, Western Kentucky Genealogy Blog, http://wkygenealogy.blogspot.com/
Posted by Brenda Joyce Jerome at 4:00 AM No comments: Links to this post

Mary Fisher, daughter of George Fisher and Sarah Vaughn, was a young woman when the Civil War broke out and probably knew the young men who enlisted from her western Kentucky neighborhood. That was not the last time she would witness men leaving home to fight in a war. When she was middle-aged, newly-enlisted soldiers left to fight in the Spanish American War and, finally, when she was an old woman, the Great War (World War I) called men to fight in Europe.

But what could a woman do? A woman's work was at home.  Her job was to help on the farm, rear the children to be God-fearing, honest citizens and hope they survived whichever war was being fought.

Mary was twice married, but had no children of her own. By her first marriage to Columbus O. Barnett on 27 November 1866, she was called on to rear his five children by his first wife, Adelina E. Stephens, with the children ranging in age from eight down to one. The marriage of Mary and C.O. Barnett ended with his death in 1871. His father, Samuel S. Barnett was appointed guardian of the children and they went to live with him.

On 19 December 1875, Mary married William B. Hosick, who was 20 years her senior. The 1880 Livingston County census shows William B. and Mary Hosick living in Carrsville. Living with them were William D. Hosick and Mary's brother and sister, Martin V.L.B. Fisher and Catherine Johnson.

William B. Hosick died 21 June 1901 and is buried near his first wife, Mary Cope, in Hosick Cemetery #1 in Lola, Kentucky. Mary Fisher Hosick died 19 June 1919 and is buried in New Union (Ditney) Cemetery near Lola. Her tombstone is surrounded by four rocks which possibly mark the graves of her siblings, 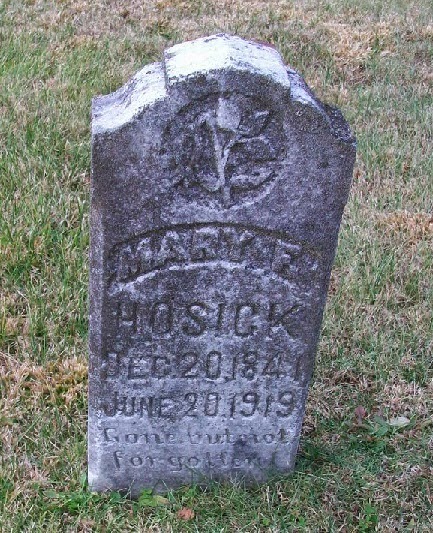 Published 2 April 2015, Western Kentucky Genealogy Blog, http://wkygenealogy.blogspot.com/
Posted by Brenda Joyce Jerome at 3:00 AM No comments: Links to this post