I have been playing around with Passport Applications 1795-1925 on ancestry.com and having a great time. The amount of information varies, but, for the most part you will find the name, date and place of birth, residence, name of father, physical description, date of sailing and countries to be visited. Some of the passport applications are accompanied by a photograph of the applicant. This is good stuff! The passport applications come with a subscription to ancestry.com.

Among the people I found are the following:

Clement Singleton Nunn, an attorney of Marion, Kentucky; accompanied by his wife Lemah Barnes Nunn, who was born in Crittenden County 4 June 1871; they married at Marion 24 October 1894. He was born in Marion 1 February 1870; father Thomas J. Nunn, born Crittenden County but now deceased. They plan to tour Germany, Italy, Great Britain, France, Switzerland, Sweden, Holland, Spain and Belgium and leave 15 July 1922. Nunn is 5 feet 8 inches high, has hazel eyes, round chin, straight nose and is slightly bald. Photographs of Nunn and his wife accompany the application.

John L. Smith, a newspaper writer living in Smithland, Kentucky, was born 10 February 1853 Lyon County, Kentucky; father Franklin M. Smith, born Lyon County. He plans to tour Japan, China and the British Possessions. He will travel on board the President Lincoln 14 June 1923. He is described as 6 feet high, blue eyes, large nose, gray hair. A previous passport was issued 20 November 1919, but is not good now. A photograph of Smith is with the passport application.


Published 27 Sept 2012, Western Kentucky Genealogy Blog, http://wkygenealogy.blogspot.com/
Posted by Brenda Joyce Jerome at 3:20 AM No comments: Links to this post 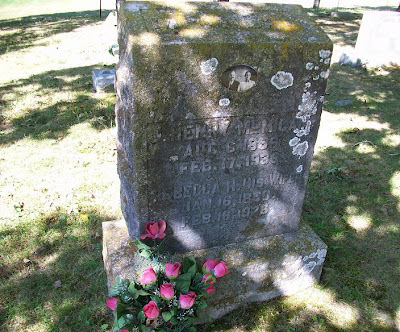 Disputes during election years were as common long ago as they are today. The following news item about Matthew Lyon of Kentucky appeared in a Hudson, New York newspaper on 9 December 1806.

"A serious fracas took place at Eddyville, Kentucky, on the night of the late election, between Matthew Lyon and a Mr. Cofield, who, it seems, had refused to vote for Lyon. Cofield attempted to gouge - but his thumb was caught in Lyon's mouth, and bitten off at the first joint - so that Matthew is not only a spitting, but a biting Lyon."

Posted by Brenda Joyce Jerome at 1:49 AM No comments: Links to this post

Am I My Own Cousin?

Most of us have convoluted relationships among our families. They cause us to scratch our heads, make charts of the relationships and wonder how this all came about. Here is an example of such a relationship in my own family. 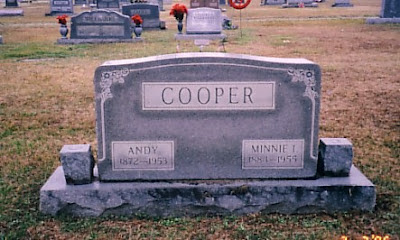 Andy Cooper and his wife, Minnie I. Cooper, are buried in Salem Cemetery, Livingston County, Kentucky. Andy was the son of John W. Cooper and Ellen Joiner, who married in 1865 Pope County, Illinois. He was also the grandson of Joseph Cooper and Nicey Pennington, my 3rd great grandparents on the Cooper side of my lineage. Joseph and Nicey Cooper had other children, including a daughter Sarah Elizabeth, who married Jeremiah "Jerry" Croft 1870 Pope County.

Keep in mind that while Andy Cooper and Minnie Croft are part of my family, I am not their direct descendant. Are you confused yet? I am! 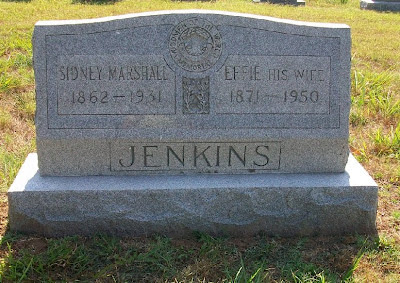 According to his death certificate, Sidney M. Jenkins was born 25 February 1862 Eddyville, Kentucky. He was the son of O.M. Jenkins and Frances M. Gordon. He died 26 September 1931 Crittenden County.

The death certificate of Effie Wilson Jenkins shows she was born 30 January 1871 and died 20 September 1950. Her parents were Robert William Wilson and Malinda Witherspoon.

Killed by the Night Riders

Most of us have heard tales of the Night Riders, who terrorized tobacco growers in western Kentucky and Tennessee during the first decade of the 1900s. The following is an account of one raid in Dycusburg, Crittenden County, Kentucky. It comes from the Henderson Daily Gleaner of 5 February 1908.

"Henry Bennett, a member of the firm of Bennett Brothers, was taken from his home, tied to a tree and severely whipped. He was left bound to the tree. Bennett Brothers operate an independent factory and have been buying tobacco from nonassociation growers, it is claimed.

As he appeared on the porch, members of the mob grabbed and bound him. Taking him into the street, they whipped him and left him lying there. The mob then proceeded to the home of Henry Bennett and called him to come out. Hastily dressing, Mr. Bennett obeyed the command. He was then taken away, tied to a tree and severely beaten."

It is said that Henry Bennett never fully recovered from his ordeal. He died 20 October 1910 and is buried in Dycusburg Cemetery. Engraved on his tombstone is this: "Killed by the Night Riders." 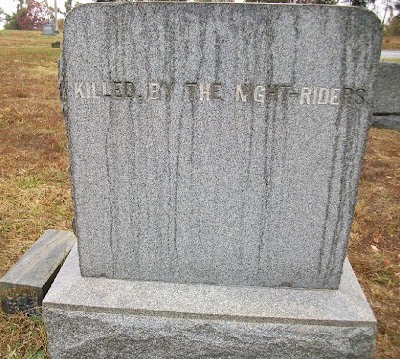 Posted by Brenda Joyce Jerome at 3:19 AM No comments: Links to this post

Who can forget the morning of September 11, 2001? I well remember where I was, as I am sure you do, too. What I didn't know was how difficult it would be to write this blog. The feeling of helplessness comes rushing back when images and videos are replayed on the computer and on television.

On that morning, I was listening to a local radio station as I stopped at the post office before going to the library to do some research. Suddenly an announcer broke into local programming to say that an airplane had hit the World Trade Center. Nothing more was known, but there was the feeling that something really bad was happening.

Research at the library suddenly didn't seem important. I turned around, went home and turned on the television. Like everyone else, the next few days were spent watching the horror of this brazen attack on our country.

As bad as it seemed at the time, it was even worse later when the number of dead was determined and how many lives were impacted by the events on 9-11-2001. Tonight, as I watch a program on 9-11, the feelings of sadness and grief have returned - not as overwhelming as 11 years ago, but still fresh.

The good thing is that people really came together to prevent another such attack.

Do you remember where you were and what you were doing on that date? Did the events of that day change your life?


Lee Hansen created this Statue of Liberty and Flag 9-11 poster as a commemorative to the heroes and innocents lost in the 9-11 attacks. He retains the copyright on it. See http://www.squidoo.com/free-patriotic-usa-clipart
Posted by Brenda Joyce Jerome at 3:08 AM No comments: Links to this post

Copyright by Brenda Joyce Jerome, CG
May not copy in any form without written consent﻿

Isaac Trimble Handlin was connected by blood to one of the most well-known families in Livingston County, Kentucky. He was born 14 February 1832 to John T. Handlin and Catherine Trimble, who married 16 October 1828.

Before her marriage, Catherine Trimble, daughter of James Trimble, had given birth to a son, Francis, whose father was Philip Ford, son of the notorious James Ford of Fords Ferry Ohio in present-day Crittenden County. In Philip Ford's will (Livingston County Will Book A, page 145, recorded 1 June 1833), he mentions his son, "Francis Ford, now living with me and whom I own as my son." Proof of the relationship between Francis Ford and Catherine Trimble is found in Livingston County Inventory Book D, page 250, when Philip Ford's estate was being settled. It is stated "a summons for Mrs. Catherine Handlin the Mother of Phil Fords child ..."

Apparently, Francis Ford did not live with Catherine Trimble Handlin. When he was age 14, Francis was allowed to choose his own guardian and, on 13 January 1845 in Crittenden County, he chose Henry R.D. Coleman, according to Crittenden County Court Order Book 1, page 72.

In 1859, Isaac Trimble Handlin married Rosa B. Clark in Marshall County. By 1870, they were living in Smithland, where Isaac was a practicing attorney. The 1870 Livingston County census shows Isaac and Rosa with the following children in their household: Clara, Maggie and Frank. In addition, they had William R., Joseph D. and Mary Trimble, all of whom died as infants.

Isaac T. Handlin died in 1882 and is buried in Smithland Cemetery next to his infant children. The symbol at the top of his tombstone indicates he was a Mason. 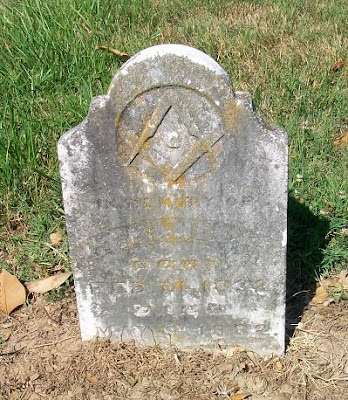 Published 6 September 2012, Western Kentucky Genealogy Blog,  http://wkygenealogy.blogspot.com/
Posted by Brenda Joyce Jerome at 2:54 AM No comments: Links to this post 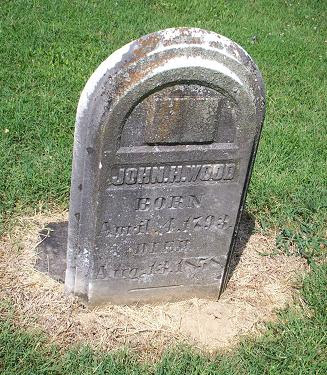 The name of John H. Wood's first wife is unknown, but we know that he married Mrs. Mary Phillips in 1842 Livingston County. For information on their marriage contract, see Marriage Contract

John H. and Mary Wood appear on the 1850 Livingston County census. John died just a few years later of consumption, according to Livingston County Vital Statistics (Deaths, 1858). He was born in South Carolina; his mother was listed as Nancy and his father was not named.

John left a will recorded in Livingston County Will Book B, page 183, dated 12 April 1858 and probated 5 September 1858. Named in his will are children William L. Wood, Sophia Burnham, Harriet Williamson (wife of George D. Williamson)and Richard G. Wood. George D. Williamson was named as executor of the will.

Posted by Brenda Joyce Jerome at 3:12 AM No comments: Links to this post

For a list of books currently on sale, check here:

Book Sale
Posted by Brenda Joyce Jerome at 8:31 AM No comments: Links to this post