Willard Library, Evansville, Indiana is sponsoring a Beginning Genealogy Workshop on Saturday, 12 March 2016 from 9:30 a.m. to 3:15 p.m. in the library's Browning Gallery. Four classes are planned: Beginning Genealogy with Special Collection's librarian, Lyn Martin;  Courthouse Research and Vital Records with County Historian Stan Schmitt; I have the document. Where do I go from here? with Brenda Joyce Jerome, Certified Genealogist; and Finding Vital Records in LDS Microfilm with Brian Lankford, Tri-State Genealogical Society officer and researcher. All classes are free. Registration is requested, but not required.

For more information, go to Willard Library's Calendar of Events.

Have you been unable to find an obituary for your Morganfield, Kentucky ancestor? Don't forget to check other area newspapers. The Henderson, Kentucky papers often cover Union County and the Evansville newspapers also contain news of Morganfield.  Since I live close to Evansville and like the accessibility of that city's newspapers, I check them often in my western Kentucky research.

Did you know that the Evansville Courier carried a column called News Of Morganfield  every Wednesday from 5 May 1915 through 11 March 1921?  This column contained obituaries as well as news of social events and other happenings. The coverage of events in  Morganfield is really important when you realize there are no extant Morganfield newspapers prior to 1924.

Below are a couple of Morganfield obituaries that are typical of those found in the Courier.

The death of William Caldwell, one of the oldest men in the county occurred at his home near Seven Gums on Saturday. He was past 89 years old and had been married twice, his first wife being Miss Fannie Whitecotton, and after her death he married Mrs. Thomas Robertson. Seven children and many grandchildren and great-grandchildren survive him. When young, Mr. Caldwelll came to this county from Shelby county to make his home. The burial was held in the Masonic cemetery in this city Sunday afternoon. ["News of Morganfield," Evansville Courier, Wednesday, 27 Sep 1916, p. 24]

The funeral of William Marmaduke Wright, many years a cashier of the People's bank, took place this morning at the family residence at 10 o'clock. His wife, Mrs. Lillie Berry Wright, survives. No man had truer friends or more of them. He graduated from Bethel college and he had been for many years a Knight Templar and Shriner and the Masonic order has lost one of its most honored members. He was married to Miss Maggie Young, daughter of Judge Milton Young, in 1882, who died without issue in 1898. He was married to his present wife at East Haddam, Conn., while she was on a visit to her aunt, Mrs. H.W. Tyler. He was stricken with paralysis two years ago and has since then been an invalid. Two weeks since he was taken very much worse and passed away Saturday at 11 o'clock. Rev. Young of the M.E. church had charge of the services and the burial was in charge of the Masons in the Masonic cemetery. ["News of Morganfield,"  Evansville Courier, Wed., 14 Nov 1917, p. 10]

In addition to Morganfield news items, you will also find News Of Sturgis and News Of Uniontown.  Happy Hunting!


Posted by Brenda Joyce Jerome at 3:30 AM No comments: 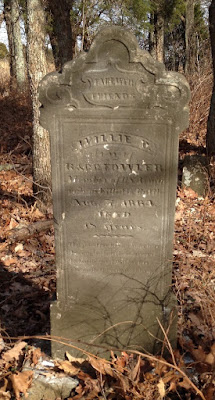 Willie  P. Fowler was one of two Union soldiers killed when 300 Confederate soldiers and guerrillas attacked Companies B and C of the 48th Kentucky Volunteer Mounted Infantry during the Battle of Salem on 7 August 1864. The Union soldiers numbered only 35.

Willie,  the son of Robert Fowler, an early tailor in Marion, and Cynthia Caroline Ragsdale, was born about 1846. His father died when he was about five years old and his mother then married Henry C. Wheeler. Willie P. was mustered into Company B, 48th Kentucky Vol. Mtd. Infantry on 26 October 1863. He was only 17 years of age.

Many years ago a Franks family researcher shared a copy of a letter written in 1837 by Elizabeth Gill who lived in old Livingston County. The letter was written to her family back in Laurens District, South Carolina and named several family members.

Juda Franks, who is mentioned in the letter, is my only connection to the letter-writer. Juda was the mother of Nancy Franks, who was the third wife of my 4th great-grandfather, John E. Wilson.  Juda Franks was also the sister to Elizabeth Gill. I descend from John E. Wilson and his second wife, Harriet Brooks.

A transcription of this letter is below.  There is no punctuation so you will have to insert those marks mentally to make comprehension easier.

[1] Cross Keys was located on the lane leading from Fords Ferry Road and ending at Crooked Creek Church, about 1-2 miles from the seat of justice of present-day Crittenden County. In 1837, this area was still part of Livingston County. Cross Keys Inn was the property of Samuel Ashley and was the site of the first county court of Crittenden County in April 1842. Abraham Lincoln visited Morganfield, Union County, Kentucky in 1840. He was in Shawneetown, Gallatin County, Illinois for a debate on the 5th of December and decided to pay a visit to Kentucky before returning to Shawneetown.[1]

When a person died owning property, but left no will, an administrator was usually appointed by the county court to settle the decedent's estate.  After executing bond to show he would faithfully and fairly settle the estate, he was responsible for collecting debts due to and from the estate and to make a fair distribution of the remainder. The date of the administrator appointment is often used as an approximate death date.

John Graham was appointed administrator of Abnedgo Llewellyn's estate 12 Nov 1860.  [p. 44]   "A writing purporting to be the last Will and Testament of Abnedgo Llewellyn was produced and proven by the oaths of D. Head, G.W. Wynn and L.M. Rice, subscribing witnesses." 8 Mar 1861.  [p. 92]

Joel Blackwell was appointed administrator of the esate of Buckner Ash 20 Nov 1860. [p. 49]

Jim Bowie, who is often associated with the Bowie knife and who was killed at the Alamo in 1836, spent part of the fourth year of his life with his family in Livingston County, Kentucky. Rezin Bowie, Jim's father, can be found on the 1800 Livingston County tax list and was appointed appraiser of the estate of John Clark deceased that same year.[1] 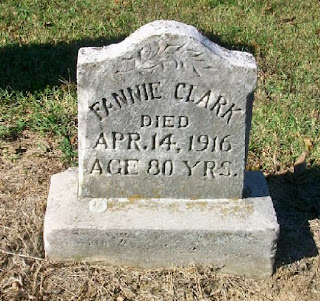 According to her Kentucky death certificate #11172, Fannie Clark was born in April 1835 and died April 13, 1916. She was listed as single and her parents were unknown.

The 1900 Livingston County shows Fannie Clark, as a cook residing in the household of her sister-in-law, Emily Clark, a hotel proprietor. Fannie is listed as born in Alabama, as were her parents. By 1910, Fannie  age 75, was a lodger in the home of Byrnes Clark, a 44-year-old widower born in Kentucky. On that census, Fannie's birth place was given as Kentucky and both parents were shown as born in Kentucky.

It is unknown when Fannie Clark came to Livingston County, but her brother, James M. Clark, was in Smithland by 4 February 1855, when he married Emily Lucas. He gave his birth place as Lauderdale County, Alabama. He appears on the 1870 and 1880 Livingston County census records, but Fannie does not.