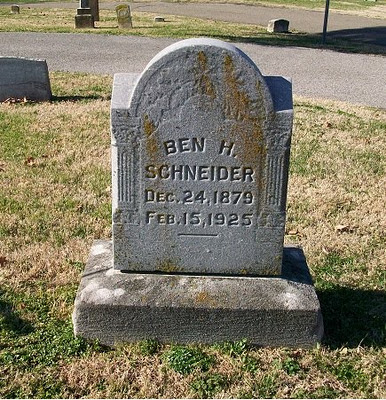 According to his death certificate, Benhart Schneider was born in Kentucky and was the son of Benhart Schneider and Dena Univerzagt, who were both born in Germany. A news article in the Henderson Gleaner on Sunday, 15 February 1925, states that Ben Snyder, 45, died the day before in the store of Ivo Griffith in Henderson. Survivors included one brother with whom he lived and three half brothers and one half sister.

The 1900 Henderson County census shows Ben H. Schneider living with his parents and siblings at 1001 Clay Street, Henderson. He and his father were listed as coal miners.

Posted by Brenda Joyce Jerome at 2:59 AM No comments:

"It is ordered that the clerk of this Court Issue to the said Minta Jenkins (who is ascertained to be ... aged Thirty Seven years, about five feet & a half inches high, yellow Complexion, no scars, a Certificate of her freedom ..."

The 1860 Livingston County Mortality Schedule on Ancestry.com shows that Araminta Jenkins died of consumption in January 1860.

A couple of tombstones in Smithland Cemetery are intriguing and hint at more information on Bazil Jenkins.

The first one is for Alsey Jenkins with the date of Novr. 1st 1835. The stone is broken and it is unknown if this is her death date or not. 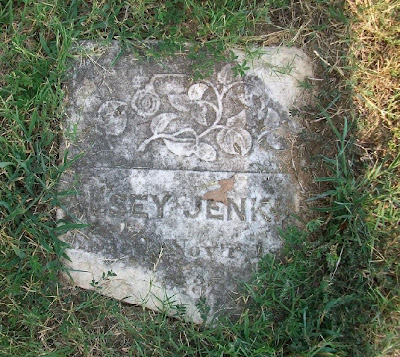 Beside Alsey's tombstone is one for Lyda Jenkins. It states she died June 30th 1842, Aged 57 years. There is a long, partially illegible inscription and, below the inscription is this: "Erected by her son Bazil" It is unusual for a slave woman to have a tombstone at this time and we know she must have been a slave as Bazil was born a slave. If his mother had been free, Bazil would have been free also. 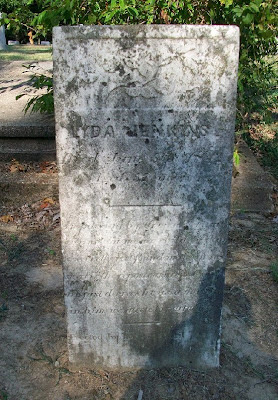 Now, if we could just find out what happened to Bazil Jenkins after his marriage in 1866 Pope County, Illinois.

Posted by Brenda Joyce Jerome at 3:04 AM No comments: 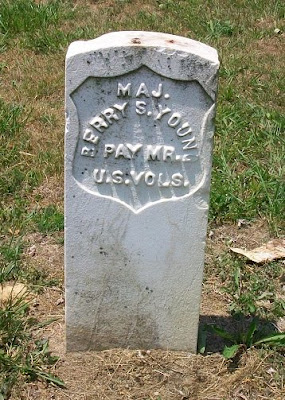 Berry Sams Young enlisted 21 April 1864 in the U.S. Volunteers Paymaster's Dept. Infantry and was promoted to Major the same date. He was mustered out 24 February 1865, according to the Index to Compiled Military Service Records.

According to the 1880 Crittenden County Mortality Schedule, Berry S. Young, age 65, died of dropsy in February 1880.

Posted by Brenda Joyce Jerome at 2:00 AM No comments:

It was surely difficult seeing your hometown overrun with soldiers during the early days of the Civil War, especially if those soldiers were in the Federal army and you sympathized with the southern cause.

People expressed their displeasure at the war in different ways. Some citizens of Smithland, Kentucky risked repercussions by flying the Confederate flag, others enlisted in the Confederate army and still others sent reports on the Federal army to the Confederacy.

Shortly after the war began in 1861, it was recognized that Smithland was important because of its location at the confluence of the Cumberland and Ohio rivers. The Federal army moved into Smithland in September 1861 and remained there until after the war was over in 1865. The strengths and weaknesses of the Federal army at Smithland was of interest to the confederacy. Who better to report on activities than Ben F. Egan? As a former resident of Smithland, he knew the people, the roads and, as a steamboat captain, he knew the rivers.

The first report Egan made about the Federal army in Smithland can be found in Official Records, Series I, Vol. 52, page 155, dated 26 September 1861. The report was sent from W.J. Waldron at Clarksville, Tennessee to General Polk. Waldron stated that "Capt. Ben F. Egan, just in from Smithland, reports that steamer Empress landed there on Tuesday evening 1,000 infantry and one company of cavalry, and took possession of the town."

It is a later report that provides a good look at the Federal army in Smithland. This report is located in Confederate Citizens File, Civil War, on Fold3. Egan submitted this report on the 11th of February 1862 [incorrectly given as 1861 in one place]. The report, accompanied by a hand drawn sketch, reads as follows:

"The Federal forces now occupying Smithland number 320, regularly enlisted soldiers and about 75 raw, green recruits recently brought there by P.D. Yeiser, of Eddyville Ky, who is raising a company for Judge Williams' regiment, these men are quartered in an old cooper shop near the market house. The Federals are encamped on Dr. D.B. Sanders' hill, behind his brick house in the orchard, their position is shown in the sketch ... these men are armed with the old U.S. muskets. There are only 3 pieces of cannon, one 64 and two 32 pounders - The 64 and one 32 are planted behind the camp and command a range a range [sic] from the Sulphur Spring (about a mile and a half distant) to the head of Cumberland island, the other 32 pounder is planted in the south East corner of the Grave Yard, commanding a range from the Sulphur spring to the foot of the Cumberland island - the guns in the accompanying sketch are marked ... The camp is on the farther side of the hill from the town immediately below the 64 lb gun. These guns are planted so as to command the road leading to Eddyville and Paducah but can be fired in any direction, as they work on turn tables. The pickets are stationed about a mile on the Paducah road and about a mile and a half on the Eddyville road and in a circle of about a mile to the Cumberland river. Trenches are dug on each side of the big road ... The troops say that if they are left alone and have one week to complete their fortifications that they will be well prepared to resist any attack that may be made by Southern troops.

"On Tuesday night an expedition of these troops started up the Cumberland river destroying all flat boats, ferry boats & rafts... and every description of water craft. On Wednesday they progressed as far as Greens Ferry, and were to continue the destruction of boats as far up the river as Ross' Ferry (27 miles) - The force occupying Smithland are [illegible word] and have been all the time in constant fear and alarm and greatly dreading an attack."

The Grave Yard mentioned in the report is Smithland Cemetery, which is located high on a hill just back of the old courthouse and provides a good view of the rivers.

It is unknown if Egan's reports ever became known to Smithland residents, but it is known that he left Smithland before the war and never returned to live there.

Ben F. Egan led a very interesting life on the river and elsewhere. He was the son of Edward Egan and Martha "Patsy" Barner of Logan County, Kentucky. After her husband died, Patsy Barner Egan married Henry Wells, an early commission merchant in Smithland. Following the death of his mother and stepfather, it is believed Ben F. Egan moved into the house of his Uncle Benjamin Barner on Charlotte Street. Further information on the life of Ben F. Egan will be presented at a later date on this blog.
Posted by Brenda Joyce Jerome at 2:37 AM No comments: 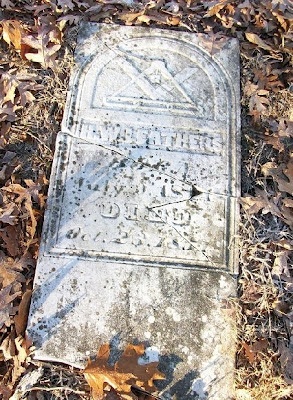 The 1850 Livingston County census shows H.W. Leathers as a 38-year-old tobacco merchant living in the Salem area. Also in his household is Elizabeth Leathers.

Posted by Brenda Joyce Jerome at 2:19 AM No comments:

If you are like most researchers, you have a blank space where you record the place of birth, or marriage, or death of one of your ancestors. Although you know where they lived all their life, they just don't appear in the correct records of their home county.

Rather than decide some records have been lost, it's time to expand your research boundaries. Consider the following:

1. Could your ancestor have been born at a grandparent's home in a different county or even a different state? It was not unusual for a pregnant woman to visit her family for assistance at the birth of her child.

4. If you can't find a death record for your ancestor where he lived all his life, check the areas where his children lived. Perhaps a child took in his parent to care for him during his last days or maybe he died in a hospital in the nearest large town.

It's time to expand the boundaries in your research. Remember county and state lines as well as rivers were not barriers and begged to be crossed.

Recently I visited Leeper Cemetery in Livingston County, Kentucky. It is easy to find. From U.S. Hwy 60 at Smithland, turn onto Hwy. 70 (Tiline Road) and go 7.6 miles to Sugar Creek Road. Turn right onto Sugar Creek Road and go .4 miles to the cemetery on the left side of the road. The cemetery is well maintained, but there are a number of broken and fallen tombstones. The purpose of my visit was to find the tombstone of Mary Jenkins Perkins Smith. A Perkins descendant told me that some years ago he had located her tombstone under a layer of dirt and leaves. I wanted to see it for myself.

Mary Jenkins was the daughter of Bartholomew Jenkins of Caldwell County, Kentucky. Shortly before her marriage to John D. Perkins on 9 January 1827 in Livingston County, John Miller was appointed her guardian. A parent or guardian had to give consent for minors to marry in Kentucky. Miller was likely appointed guardian so that he could give consent for the marriage. Consent for John D. Perkins to marry was given by his brother and guardian, Brooks Perkins.

According to the Perkins descendant, the dates of the tombstone of Mary Smith show she was born 5 September 1807 and died 19 September 1869. The broken stone is in such bad shape that it is almost impossible read anything but her name today. The stone is next to that of her husband, John Smith. No dates are visible on his tombstone. 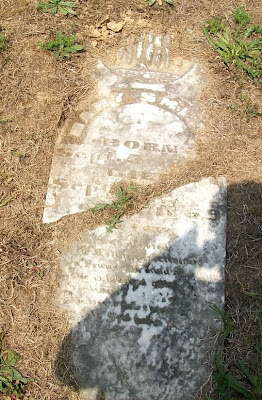 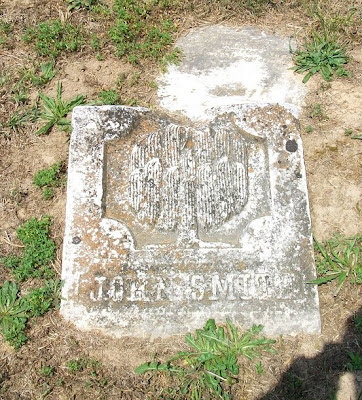 Posted by Brenda Joyce Jerome at 2:48 AM 4 comments: 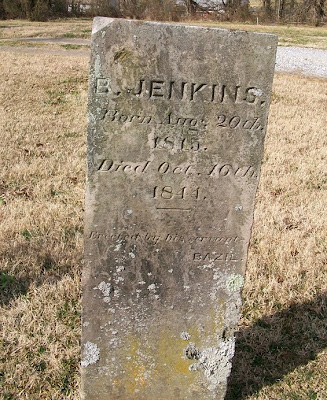 
Under a bush beside the above tombstone is another marker: 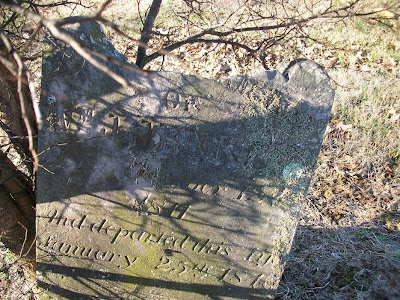 
There surely must be a story behind the inscription on these old, weathered tombstones in Smithland Cemetery, in Livingston County, Kentucky. Were B. and Wm. J. Jenkins related? How did the servant, Bazil, figure into the picture?

A little research provides some clues. Caldwell County, Kentucky Inventory, Appraisement and Sale Book 1, pages 221 and 317 (recorded 18 August 1828)has two important entries. The first, dated 15 September 1826, is the appraisement of the estate of Bartholomew Jenkins. The second entry, recorded 18 August 1828, states that William and Bartholomew Jenkins were orphans of B. Jenkins dec'd.

Ok. So B. Jenkins was really Bartholomew and William was his brother, but what about Bazil?

There is no probate record for B. Jenkins, but William J. Jenkins left a will in Livingston County (Will Book B, page 114, dated 19 October 1845 and probated 2 February 1846). In this will, he mentions that he is to be buried beside his brother in Smithland Cemetery. He also mentions that his servant Bazil is to be free. "He has been a good and kind servant to me and I wish him to remain in slavery no longer."

By the 1860 Livingston County census, Araminta was gone. Bazil was listed as age 50 and was still an engineer. Living in his household were Edmond and Polly McAuley and 14 year old Cassander. All were listed as Mulattoes. Bazil Jenkins and Cassander McAuley/McCawley were married 14 January 1866 in Pope County, Illinois.

That is the last record I have found for Bazil Jenkings. Did he move away? Did he die? 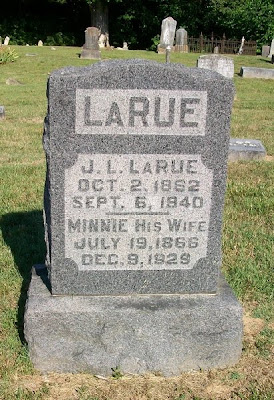 Posted by Brenda Joyce Jerome at 2:30 AM No comments: