A Visit to Lola, Kentucky

One of the many little villages dotting the western Kentucky countryside is Lola, in Livingston County. As a child I often visited my cousin and her family and remember several businesses, including my aunt's grocery store, home of the famous Mustard Jar.

A recent visit to Lola shows a different picture. The stores are all closed and the only activity was centered on a house where a woman was moving out. The post office has been closed for several years and my aunt's store, which adjoins the post office, is also vacant. 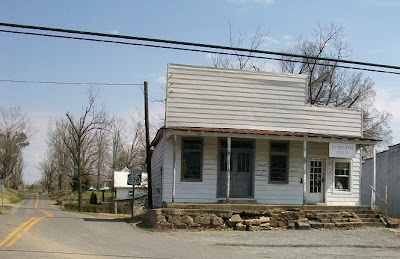 
Just across the road is the store once operated by Tommie May. This brick building was built in 1896 from bricks made from material taken from a nearby slough. 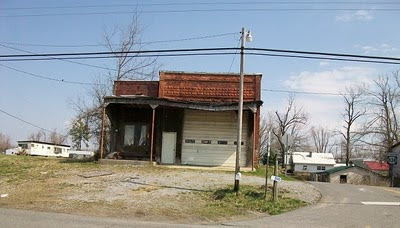 
Traveling down Hwy. 838, Lola Baptist Church is on the left. This neat, well-kept church fairly glistened in the bright sun. 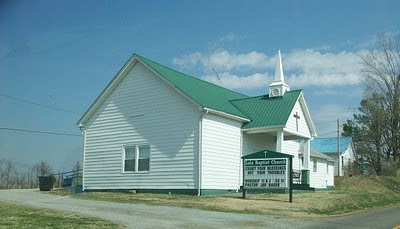 
The destination of this trip came as we turned off onto New Union Church Road. Many of my Vaughn ancestors are buried in the cemetery adjoining New Union church and my great-grandfather, David Vaughn, lived just over the hill. While the church is now called New Union Church, my family never called it anything but Ditney. In addition to Vaughn, other names found on the tombstones are Wright, Belt, Dalton, Curnel, Champion, Singleton, Damron, Tabor and many others. 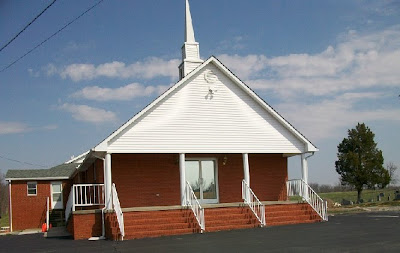 
Several members of my aunt's Fisher family are buried here, but most do not have tombstones. Among those buried here with no tombstones are the following:

It was a beautiful day for a trip to Lola and it brought back many memories of times past.
Posted by Brenda Joyce Jerome at 10:32 AM

I enjoyed this little armchair road trip, especially the post office. I always take pictures of post offices. Thanks for sharing your photos of Lola, Kentucky.

Post offices were usually the center of activity in small towns and a great place to get caught up on the news.

I had a friend who came from Lola, Charlie Falls. I went to Vietnam with him (67,68). I remember his step father's name was C.O. Strong. Probably long gone by now. Any info you may know of this family I would appreciate. bill3dster@gmail.com Bill Dalton

I'm in the early stages of establishing my family genealogy. I'm located in Michigan and believe my father and grand-father (both named Clarence Rice), trace back to Lola via Detroit. If anyone with information sees this and would like to chat, please contact me at riceemail@gmail.com. Thanks, Brian Rice

I grew up in this town and went to the old Lola elementary school until closed after my 6th grade year. I remember all those stores plus 2 gas stations. I used to mow several yards in this town we could ride the old mower to wherever we were going to mow...

Thank you for sharing your memories of Lola.

I remember going down to visit my family in Lola when I was a kid.

I have such fond memories of Lola , my Momma Grace Sunderland aka Grace May lived in Lola as my maternal grandparents , Rena and Russell Gilland on a farm in Lola . I remember the gas station there my Dad nicknamed the owner “Goose Razor” my Dad Carter May always gave everyone a nickname ! The love my Momma Grace had for my Dad was unconditional she loved him to pieces as she did all of us . I remember the stores open in Lola ,the town was so alive , and as I visit the cemetery there where my parents resting place is every year I feel so sad , I sit there and recall the memories as a kid in Lola Ky . I will always cherish them .

Lola seems to evoke many fond memories for a lot of people. I appreciate you sharing your feelings about Lola and hope you enjoy many more trips there.