Do These Names Make You Dizzy?

An article about a married couple with Caldwell County, Kentucky connections appeared in several newspapers in 1880. [1] The parties were Drury Mitchuson Kevil and his wife, Lucretia Kevil Mitchuson. The article stated they were about to celebrate their 50th wedding anniversary and lived in Milan County, Texas.  Their names were very similar, but the article says they were not related.

Drury M. Kevil was born in 1808  in Kentucky[2] and named for the father of his future wife. She was born in South Carolina in 1810[3] and  was named for the mother of her future husband. When she married Drury Mitchusson Kevil, her name became  Lucretia Kevil Mitchussson Kevil.   Are you dizzy or confused yet? I will let you try to figure it out if the couple was related..

On the 11th day of September 1830, Drury M. Kivell and Miss Lucretia Mitchusson married in Caldwell County. Giving consent for the bride was Jonathon Stevens, her guardian. [4] They lived in Caldwell County through 1870, at least, and then are found on the 1880 Milan County, Texas census. [5]

In 1880, Drury M. Kevil was age 70 and living with his son, Uriah Kevil. Drury’s wife, Lucretia, was not listed in this household, but was listed as living near by with another son, Jesse P. Kevil.[6] 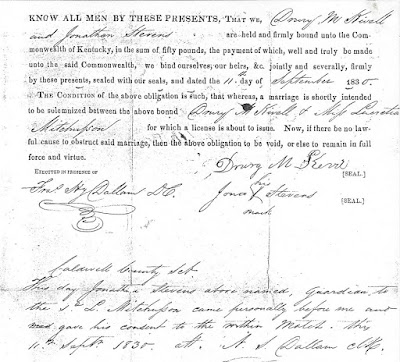 Original Marriage Bond and Consent of Drury M. Kevil and Lucretia Mitchusson. Click on Bond for an enlarged view.


Published 2 April 2020, Western Kentucky Genealogy Blog,  http://wkygenealogy.blog.spot.com/
Posted by Brenda Joyce Jerome at 5:30 AM No comments: Links to this post

“We have had three cases of diphtheria in the last twelve months, one near Grand Rivers, one at Vicksburg, and one at Smithland, with one death. Four thousand units of antitoxin used every six hours, with one thousand units used as immunizing doses, to all exposed.  One case at Salem, reported today; Dr.  J.V. Hayden in charge. We are having the hearty co-operation of the entire corps of fiscal and county officers, the laity acquiescing in same, which adds greatly in the efficiency and satisfaction of the work.

“I have been health officer of Livingston County for a period of eight years and at present draw an annual salary of $250.00.

“All of which is respectfully submitted.         F.G. LaRue, County Health Officer.” 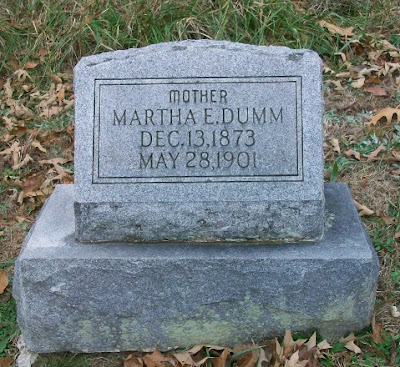 
Published 24 Mar 2020, Western Kentucky Genealogy Blog,  http://wkygenealogy.blogspot.com/
Posted by Brenda Joyce Jerome at 5:30 AM No comments: Links to this post

The following runaway notice appeared in the National Banner and Nashville Whig (Nashville, Tennessee) on Friday, 26 November 1830, page 1.  These  notices were often in newspapers published in towns along the rivers. News traveled along the rivers as news travels via internet today.

Captain Joseph Miller was born in Ohio and built his first steamboat, the Red Rover, in Pennsylvania in 1827.  He was shot and killed at Trice's Landing, Tennessee in 1846, age 55,  and is buried in Nashville City Cemetery. His daughter, Nettie, married Ben F. Egan, nephew of Benjamin Barner and Sterling M. Barner, commission merchants of Smithland, Kentucky. Capt. Miller also owned land near the Smithland Cemetery at one time. 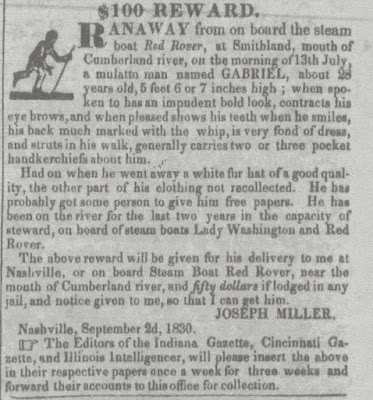 Published 19 March 2020, Western Kentucky Genealogy Blog, http://wkygenealogy.blogspot.com/
Posted by Brenda Joyce Jerome at 5:30 AM No comments: Links to this post

From Fiction to Fact?

In my family, my great-grandfather, James Pinkney Joyce (born 1835 Lawrence County, Tennessee – died 1881 Hardin County, Illinois) served in the Union Army during the Civil War. He left Tennessee with his family, traveled to New Madrid, Missouri, where he enlisted in the 2nd Illinois Cavalry.

Here is where there is a crimp in the data.  Every relative who knows of James P. Joyce, “knows” he traveled at night and when he stopped, he turned his wagon around, facing south as if indicating the family was going in that direction. He was facing conscription and should not, by military rules, have been going North toward the federal army. I first heard this account from my father, who seemed to be the “keeper of stories” of the Joyce family.  The same story was repeated to me by other family members through the years.

My question to you is do traditions ever truly go from just traditions to fact and, at what point does that happen?  Is it when the majority of people decide it must be fact or is it not until you find documentation indicating it truly happened?

Just to mix things up, how do you reconcile that it may be only partially true?  For example, I found an account of another family that states James P. Joyce’s family apparently traveled to New Madrid County with him, but from there they were under the protection of another family as they traveled on to Hardin County, Illinois.    Does this throw us back to square one?  Your ideas and/or suggestions are appreciated.    The goal is to find the truth.


Posted by Brenda Joyce Jerome at 6:00 AM No comments: Links to this post

Interesting tidbits of information show up in the most unexpected places!  The following information of the health condition of Lyon County, Kentucky was found in the Bulletin of the State Board of Health of Kentucky, Vol. II, No. II, March 1912, p. 449, Biennial Report 1910 and 1911, Google Books, accessed 2019.

D.J. Travis, M.D., County Health Officer, wrote a letter to the State Board of Health:

“Gentlemen … During the year 1909 a very interesting incident occurred in this county and I am referring to it on account of the important bearing it has had and is having on the work of our county board.

“In April, 1909, there occurred an unusually extensive outbreak of smallpox in the town of Kuttawa, in Lyon County, two miles from Eddyville. Our county board at once adopted the rules of the State board as our chart for preventing the spread of the disease. We quarantined against Kuttawa, and one Mrs. Allison, who had her residence in Kuttawa, and was operating a millinery shop in Eddyville, in violation of the quarantine, brought her infant son from Kuttawa to Eddyville. The county board directed her to return with her child to Kuttawa or be subjected to thirty days isolation. She returned to Kuttawa and the board, upon learning that she had stored the cast-off clothing of the boy in her store, disinfected the storeroom and stock of goods. She afterwards brought suit in the circuit court against the county board of health and the sheriff who had executed the board’s orders. The case was finally disposed of in the Court of Appeals by an opinion of Judge Settle, on the 24th day of July 1911. The case is entitled Allison vs Cash, etc. and the opinion appears at page 245, S.W.R. 137. This action and the court’s final determination of the questions involved has gone a long way towards settling for all time the question of the power of a county board to take necessary steps to suppress a contagious epidemic. Our board was represented by Hon. N.W. Utley …

“In February, 1910, we had an epidemic of measles with about three hundred cases and four deaths the fatal cases being complicated with pneumonia. No action was taken by the local board to suppress the outbreak. We had one open meeting at which the subject of general hygiene was discussed to the general benefit of the community.
Respectfully,
D.J. Travis, M.D.
County Health Officer”

Sometimes we can learn about life in earlier days by reading what others, perhaps not even blood relatives, have to say about their lives. For example, in 1936 Mary Ann Johnson, age 80, related events of her life, first in Livingston County, Kentucky and later as a married woman across the Ohio River in Illinois.[1] As  you might imagine, her life was far different from that of children today.
Mary Ann was born to Thomas and Lucy Ann (Glass) Jackson on 15 August 1856 on a farm near Smithland.

The 1860 Livingston County census shows 2 year-old Mary Ann in the household of her parents, Thomas Jackson, age 31, and Lucy A. Jackson, age 30, along with her siblings Moses D., Woodford B., Robert N. and Rebecca. [2]

Mary Ann's father taught her lessons at home until she was big enough to walk the four miles to and from school. Then she went to school in a little log school house in which benches were boards laid across pieces of wood.

Instead of using coal as fuel for heating, Mary Ann's family used wood her father had cut. Meals were cooked over a fireplace or out of doors over an open fire. Bread was baked in iron pots suspended over the fire.

Although she was less than 10 years old, she remembers events of the Civil War, including when soldiers came to her father's home in search of food. She recalls her father hiding the stock to keep them from being confiscated by soldiers.  Smithland was occupied by the Union army throughout the war, but many of its citizens were southern sympathizers.

When she was 17, Aaron S. Johnson, formerly a Union soldier, courted and won the hand of Mary Ann. They were married 11 November 1874 at her father's home in Livingston County.[3]  It was Mary Ann's first marriage and the third marriage for Aaron.  They settled at Green's Ferry, Kentucky, later moving to a farm at Carrsville.  By 1900, the Johnson family was living in Lola, Livingston County.[4]

Johnson was a General Baptist minister as well as a farmer. He and Mary Ann, like others at this time, had to work hard to support themselves and their growing family. It fell to Mary Ann to work the wool from the sheep they raised and make their clothing. She had to card the wool, spin it, weave it into cloth and make the linsey-woolsey dresses and jeans as well as knit the socks and stockings for the family.

In 1900, one of the Johnson's sons moved across the Ohio River to Hardin County, Illinois. Mary Ann recalled that it took five wagons to bring their household goods across the river.  Not long after this, Aaron S. Johnson's health began to deteriorate and it fell to Mary Ann to care for her husband as well as support the family.  In July 1917, Aaron passed away. Mary Ann was 61 years old and had given birth to 13 children, but only seven were living in 1936.

Mary Ann Jackson Johnson died at the home of a daughter in Benton, Illinois 5 December 1938. She was 82 years of age. She had lived through the Civil War, the Spanish American War and World War I. She had seen the invention of the telephone, airplane and automobiles and had lived a long and full life.