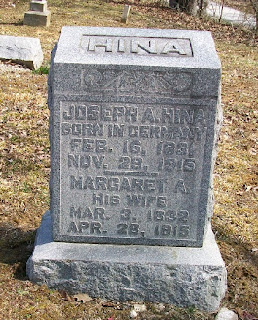 Joseph A. Hina
Born in Germany
Feb. 16, 1831
Nov. 29, 1915
--
Margaret A.
His Wife
Mar. 3, 1832
Apr. 28, 1915
Buried Bells Mines Cemetery, Crittenden County, Kentucky. Tombstones photographed 23 March 2013.
According to death certificate #26637, Joseph A. Hina was born in Baden, Germany and was the son of Anslum Hina.  Joseph's wife, Margaret was born in McMin [sic] County, Tennessee and was the daughter of Robert Murphy and -- Shields, according to her death certificate.
Published 30 July 2013, Western Kentucky Genealogy Blog,  http://wkygenealogy.blogspot.com/
﻿
Posted by Brenda Joyce Jerome at 3:00 AM No comments: Links to this post

If a person owned property at the time of his death, a disposition of the property was made following his death. If there was no valid will, an administrator of the decedent's estate was appointed by the court to collect and pay claims against the state as well disperse the remainder. An administrator de bonis non was appointed to complete an estate administration that had already begun. The following administrator appointments were abstracted from Administrator Bond Book A 1853 - 1868, Livingston County Clerk's Office, Smithland, Kentucky.

C.S. Lyon was appointed administrator of the estate of Harriet Lyon 22 January 1862.

John Chandet was appointed administrator of the estate of John Henie[?] 7 April 1862.

E.L. Davis was appointed administratrix of the estate of James Davis 5 May 1862.

John Jones was appointed administrator of the estate of Henry C. Bennett 5 May 1862.

R.L. Caldwell was appointed administrator of the estate of David Caldwell 5 May 1862.

Wm. W. Edwards was appointed administrator de bonis non of the estate of Ailcy Jones 6 May 1862.

R.S.  Boyd was appointed administrator of the estate of Paul Jones 2 June 1862.

John Jones was appointed administrator of the estate of James Rucker 3 November 1862.

James C. Davis was appointed administrator of the estate of Wm. Hosick 1 December 1862.

Published 26 July 2013, Western Kentucky Genealogy Blog,  http://wkygenealog.blogspot.com/
Posted by Brenda Joyce Jerome at 4:00 AM No comments: Links to this post

Several Genealogy Books  on Caldwell, Crittenden and Livingston counties are on sale until 1 September 2013. All books are postage paid.
Posted by Brenda Joyce Jerome at 1:34 PM No comments: Links to this post 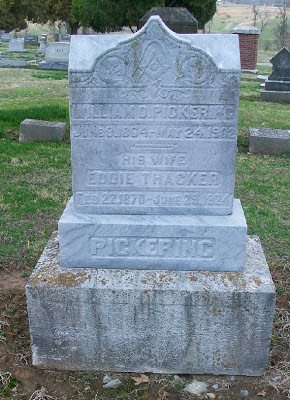 Published 23 July 2013, Western Kentucky Genealogy Blog, http://wkygenealogy.blogspot.com/
﻿
Posted by Brenda Joyce Jerome at 5:00 AM No comments: Links to this post

The Life and Death of John W. McKee

Sometimes the best information on a person's life is found after his death. This is true for John W. McKee, formerly of Smithland, Kentucky. Like many men formerly employed in a position dependent upon the rivers, he settled in Cairo, Alexander County, Illinois. The following obituary is found in the Cairo Daily Bulletin of Tuesday, 26 September 1871.  John W. McKee married  on 8 November 1855 in Smithland, Kentucky to his second wife, Mary Smith, daughter of John H. and Rhoda Smith. Mary Smith McKee is buried beside her husband.


Obituary
Death of John W. M'Kee
The death of Mr. M'Kee took place at his residence in this city (Cairo) on last Sunday morning. The deceased was a man well-known to the community of Cairo, and his death, notwithstanding that he has been in precarious health for months before the event, shocked and saddened his many friends and acquaintances. He has been affected with a troublesome throat disease for the last two or three years of his life. It finally affected his lungs and caused his death.
Mr. McKee was born in the city of Pittsburg, Pa. about the year 1827, and at the time of death was about 44 years of age. While in his minority, he entered the office of the Pittsburg Gazette, then under the management of Mr. Biddle, who was one of the prominent newspapermen of his day. Mr. McKee here learned the art of type-setting, but never followed it to any extent. Removing to Tennessee, he located in Nashville. He here turned his attention to engineering, and made practical use of his knowledge by following the river in the capacity of steamboat engineer. Some 10 or 11 years ago he began to report river news for various newspapers, since which time he has been exclusively engaged as river correspondent for Cincinnati, St. Louis and other papers. He was river editor of The Bulletin since its establishment.
Mr. McKee was married three times. The body of his first wife lies in Nashville, Tennessee, that of his second, who was a niece of Mrs. Captain Williamson, of this city, is buried at Smithland, Kentucky. She left one child, a daughter, now a resident of this city. His last wife and three little children are left to mourn the loss of a devoted husband and most affectionate father.
Fourteen years ago, Mr. McKee united with the Methodist Episcopal church in Smithland, Ky.
His body was conveyed to Smithland, Ky by boat yesterday, where, followed by the grief of aged parents, brothers and sisters and the sorrowing wife, all that is mortal of John McKee will be laid to rest. May he rest in peace. 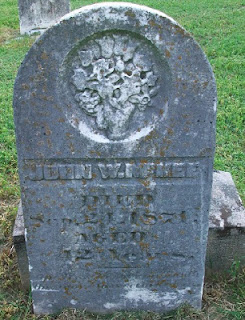 The activities of local residents were reported faithfully in the newspapers. The town of Clay, in Webster County, Kentucky, was no exception. The following entries can be found in the Evansville, Indiana Courier of 31 August 1924.


Clay, Ky., Aug. 30 - Henry Moore, an aged colored man of this city, was found dead beside the track in No. 10 mine of the West Kentucky Coal company Tuesday. It is believed  he came in contact with a highly charged electric wire and was electrocuted.


Mr. and Mrs. Jesse Brown, who have been spending the summer with Mr. Brown's father, W.J. Brown, have returned to Williamsburg, Ky.


L.V. Stone, elected recently to fill the vacancy created by the death of W.E. Bourland, county attorney, will move to Dixon in a few days to assume office. His children will attend school there.


Mrs. Almeda Taylor, 97, is spending a few days in the city with relatives.


Mr. and Mrs. Russel Mooney of Baton Rouge, La., have returned to their home after a visit with Mrs. Mooney's father, Aaron Lambert.


Word has been received here that Miss Winnie Croft of Blackford has been married to J.N. Brantley of Providence. Mrs. Brantley was well known here.


Charles Ramsey and Ed Rayburn of Dixon will open a new store in the building now occupied by W.W. Johnson. The new firm will handle dry goods.


Mr. and Mrs. Edgar Coffman, their son, Henry, Mrs. Sue Pride and Mrs. D.B. Johnson have returned to their homes here after a trip which took them to Niagara Falls, Cleveland and points in Canada. 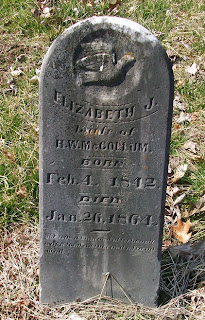 Elizabeth J.
Wife of
R.W. McCollum
Born
Feb. 4, 1842
Died
Jan. 26, 1864
She was a kind and affectionate wife ...
and a friend to all
Buried Bells Mines Cemetery, Crittenden County, Kentucky. Tombstone photographed 23 March 2013.
Elizabeth J. Newcom married R.W. McCollum 19 August 1858 in Crittenden County. They are found with one child on the 1860 Crittenden County census. R.W. McCollum was listed as a merchant.
Published 9 July 2013, Western Kentucky Genealogy Blog,  http://wkygenealogy.blogspot.com/﻿
Posted by Brenda Joyce Jerome at 3:00 AM No comments: Links to this post

A Look at Hopkins County

The following information has been gleaned from the Thirteenth Biennial Report of the Bureau of Agriculture, Labor and Statistics of the State of Kentucky 1898-1899, Lucas Moore, Commissioner and accessed through Google Books.

By an act of the Legislature of Kentucky, approved December 29, 1806, Hopkins was, in the year 1807, formed into a county. This territory was taken from the southern portion of Henderson county. It is bounded on the north and northwest by Webster county, on the west by Caldwell, on the south by Christian and on the east by Muhlenberg and McLean. Tradewater river, a small and unnavigable stream, forms the boundary between Hopkins and Caldwell, while Pond river, another small stream, marks the boundary between this and Muhlenberg and McLean counties. The county was named in honor of General Stephen Hopkins, one of the signers of the Declaration of Independence.

Where orchards have received proper care and attention they have paid most liberally. The Rev. J.F. Storey, who lives near Madisonville, the county seat, has been a most successful grower of all kinds of fruit and more especially of strawberries.

The coal fields of Hopkins county are almost inexhaustible. More than one fourth of the coal mined in the State of Kentucky is taken from the mines of this county. The St. Bernard, with headquarters at Earlington, has three large mines, one at Earlington, one at Morton's Gap, and one at St. Charles. There is the Hecla, near Earlington, the Ilsey mines, the Carbondale mines, the Stull mines, the mines at Barnsley, and two at Madisonville, the Rienecke, and the Monarch. All these mines are in a prosperous condition. This gives employment to a large force of men and their families. One good thing may be said for our mines and their management, we have no strikes here.

Hopkins county is a fine agricultural district. Here nearly everything that can be grown in Kentucky can be produced from our soil. Tobacco is the leading staple and this finds a ready sale in the markets of the world. There are less than a dozen countries in the world that produce more pounds of tobacco than does Hopkins county.

There are 88 white school districts and about 30 districts for the education of the colored students. In each and every one of these district there is a public school taught every year for a term of five months. In many of these districts the terms are 8, 9 or 10 months. In Madisonville are several private schools where the higher branches are taught. The West Kentucky Normal School is located here and has a good patronage.

Madisonville is the county seat. It is on the Henderson division of the L. & N. railroad, 50 miles south of Evansville, Ind. and 107 miles north of Nashville, Tenn. It has a population of about 4,500 and is one of most progressive towns in this portion of the state. Other post offices include: Ansonia, Ashbyburg, Barnsley, Charleston, Dalton, Dawson Springs, Earlington, Gilliland, Hamby Station, Hanson, Ilsley, Manitou, Morton's Gap, Nebo, Nortonville, Olney, Richland, St. Charles, Silentrum, Veazy, Whiteplains, Yarbro.

Posted by Brenda Joyce Jerome at 2:30 AM No comments: Links to this post Georgeanna
Daughter of
E. & M. Cook
Born March 31, 1844
Died Jan. 29, 1858
Buried Smithland Cemetery, Livingston County, Kentucky. Tombstone photographed 19 September 2012.
Elbert Cook obtained a bond to marry Malinda Smith 22 October 1832 in Livingston County. The family was enumerated on the 1850 census in that county. Elbert Cook was listed as a flatboat pilot.
This is just one of the many stones marking the burial place of a child. Very likely there are as many unmarked graves of children as there are with tombstones.

Published 2 July 2013, Western Kentucky Genealogy Blog,  http://wkygenealogy.blogspot.com/
﻿
Posted by Brenda Joyce Jerome at 3:00 AM No comments: Links to this post