Acts of The General Assembly of the Commonwealth of Kentucky, passed at the December Session, 1841 and published 1842, gives us the following information on the establishment of Crittenden County.


Chapter 97
"An Act to establish the County of Crittenden, and for other purposes.
1842
Sec. 1  Be it enacted by the General Assembly of the Commonwealth of Kentucky,  That from and after the first day of April, in the year 1842, all that part of the county of Livingston within the following bounds, to-wit, beginning on the Ohio river at the mouth of Deer creek, thence on a straight line to Presley Gray's large spring, thence a direct line to Pucket's big spring, thence down the branch of sd. spring to Claylick creek, thence down sd. creek to Cumberland river, thence up Cumberland river to the mouth of Livingston creek, thence with the Caldwell county line to Tradewater river, thence down Tradewater river to its mouth, and thence down the Ohio river to the beginning, including all the islands in sd. river Ohio opposite to sd. boundary, shall be and the same is hereby, made and erected into a county to be known and called by the name of Crittenden."

Appointed commissioners to meet at the dwelling house of James Cruce and select the site of the new seat of justice were Thomas J. Flournoy of Caldwell County, Frederick D. Word of Hopkins County, Robert T. Leiper of Caldwell County and James Gholson of Christian County. The seat of justice was to be located not more than two and a half miles from the territorial center of the new county.

The county and circuit courts for Crittenden County were to be held at the house of Samuel Ashley until suitable public buildings could be erected. Ashley lived very near the current location of Crooked Creek Church, about one and a half miles from Marion. 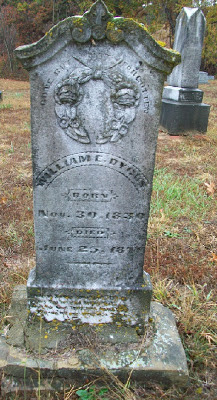 Posted by Brenda Joyce Jerome at 3:30 AM No comments: 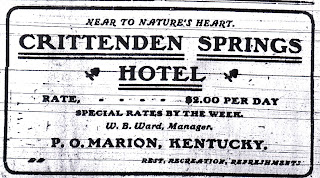 The above ad appeared in the Evansville, Indiana Journal-News Sunday, 18 August 1901

According to a little booklet on the hotel, the "Crittenden Springs is located four and a half miles from Marion, Kentucky, on the Illinois Central Railroad. Conveyances with good careful drivers, meet all trains to carry guests to "The Springs." Crittenden Springs is also seven miles from Tolu Landing, on the Ohio River and a good hack line makes daily trips from Tolu to Crittenden.

The hotel, which contains about 125 rooms, is situated upon a high mound at the foot of a large mountain and is surrounded by a beautiful grove. The building, which is a modern structure, has long covered verandas, and every window commands a splendid view. The hotel is fitted with the modern conveniences, such as electric bells, etc, and has recently been repainted and renovated. No trouble will be spared to make guests comfortable."

Miscellaneous Information:
Double daily mail to and from hotel.
Baths of mineral or fresh water, either hot or cold, at all times.
The finest frog shooting in the world found at Crittenden.

Posted by Brenda Joyce Jerome at 3:00 AM No comments: 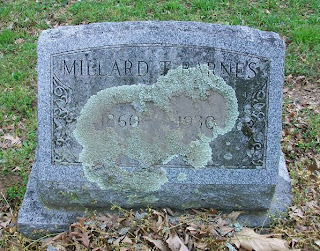 Joseph McCrosky appointed guardian for Eliza Rice, heir & infant of Benjamin Rice dec'd. Eliza is over 14 years of age and chose McCrosky as her guardian.  20 February 1824 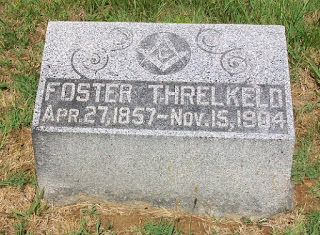 Foster Threlkeld was the son of Willis Threlkeld and Susan Foster of Crittenden County, Kentucky. Following the death of his father, Foster Threlkeld, his mother and sister, Clara, moved into the home of his uncle, Robert W. Foster .

Posted by Brenda Joyce Jerome at 3:00 AM No comments:

Because not everyone is responsible enough to remember that anything posted on this blog - or any other, for that matter - is the intellectual property of the person who wrote it,  I am posting this reminder. In other words, if it appears on my blog, I wrote it and I have control over it. No photo or text may be copied and placed on any other blog or website, including Find A Grave and Genealogy.com. That is the reason for the copyright notice in the upper left corner of each post.

Several months ago, a person from Turkey started copying each and every one of my blog posts and was putting them on his blog. Whether through stupidity or neglect, he didn't bother to erase my copyright notice. It wasn't long before it came to my attention. I began reporting his posts to Google, who owns Blogger, which sponsors this site. It took many reports, but Google took notice and shut him down. The Thief from Turkey had 14 blogs, 13 of which were active, and every post on every blog was stolen from another blog. All 14 of his blogs were erased from the web as if they had never been written. Victory - right? Not necessarily. Blogger has a way that I can track how many hits my blog receives every day as well as in which country each person lives and if and what search words they use. There are a couple of other things the stat report tells me, but I'll keep those to myself for now. To make a long story short, someone from Turkey is back checking on my blog at least once a day. Is it the Thief from Turkey - probably. This is where I need your help. If you find any of my posts on a site other than Western Kentucky Genealogy Blog, please let me know. What he is doing is illegal and I hate for my hard work to be scooped up and used to benefit someone else. This person is not doing this because it is fun; he is doing it because he is making money off my blog. He puts ads on his blogs and every time there is a hit, he makes money. This makes me very angry.

Sadly, there will always be people who haven't the will or grace to do their own work and prefer to take what others have done. If you see the Gone Fishing sign on my blog again, you will know that I am dealing with the Thief from Turkey. 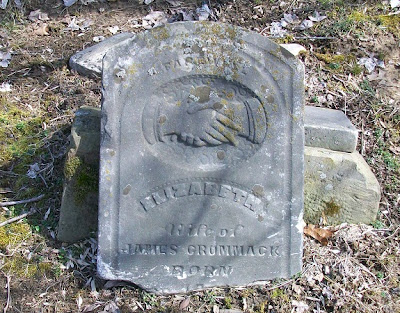 Farewell
Elizabeth
Wife of
James Crommack
Born
Buried in Bells Mines Cemetery, Crittenden County, Kentucky. Tombstone photographed 23 March 2013.  The bottom portion of this tombstone is broken off and missing. While we do not know the death date for Elizabeth, we can re-construct some of her life through recorded events of her husband.
James and Elizabeth Crommack appear on the 1870 Crittenden County census in the Bells Mines area. Both were 42 years old and were born in England. In 1868, Crommack had bought George Pickles' interest in the Trade Water United Miners Coal Co. in Crittenden County. [Union County, Kentucky Deed Book I, page 350]  It is assumed they moved to Crittenden County about that time. In a Crittenden County court statement 12 June 1877, Crommack stated he came to the United States from England on 19 September 1853 and wished to become a citizen of the U.S.
Elizabeth Crommack died before 24 January 1880 as that is the date James Crommack married Mrs. Mary Thompson Wheatcroft in Crittenden County. James and Mary appear on the 1880 Crittenden County census.  Not long after that, they moved West.  Find A Grave shows James Crommack (1828-1894) and Mary E. Crommack (1839-1912) buried in Fairmont Cemetery, Raton, Colfax County, New Mexico. [Memorials 70595592 and 70595543]
Published 6 July 2013, Western Kentucky Genealogy Blog,  http://wkygenealogy.blogspot.com/
﻿
﻿
Posted by Brenda Joyce Jerome at 2:30 AM 1 comment: 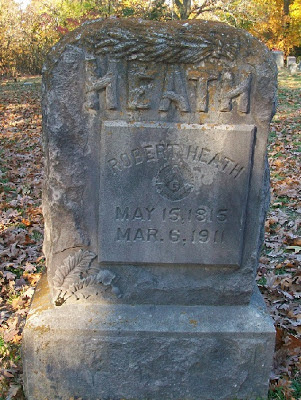 Even when there are no extant local newspapers, often news can be found in a nearby county or state. The following Uniontown, Kentucky news items appear in the Evansville Courier (Indiana) Monday, 16 September 1912 and Thursday, 19 September 1912.

Mr. William Cissell, who was prostrated by the heat, is now on the road to recovery.

There is an epidemic of sore eyes among the school children - from 10 to 12 from each grade being out of school for this reason.

Robert Hancock, who has been the popular clerk for a number of years in the drug stores here, has gone to Evansville, where he has accepted a position in Lee Orme's drug store.

Mrs. M.E. Barnes will leave this week for Gulfport, Miss. to attend the wedding of her son, Fred Barnes, in that city. Fred is well known here, having lived here until a few years ago.

Mrs. R.S. Brandon and child of Cleveland, Okla., who have been guests of Mr. and Mrs. J.W. Furnish, returned to their home.

Henry Lathan, the small child of Mr. and Mrs. Robert Lathan, died of pneumonia. He had been ill for several days. The interment took place in the Catholic cemetery Monday.

Virge Alvey and children Pauline and Cecelia spent Sunday in Morganfield with relatives.

Miss Lillian Elder has gone to Birmingham, Ala., where she will attend a convent.