Mystery in the Cemetery

Lying at the outer edge of Smithland Cemetery is an old, broken tombstone. Mystery surrounds the person buried here. Although no one seems to know who erected the tombstone, surely someone must have cared about him to mark his burial site. When Marcy was buried in 1849, there were no other marked graves in the area at the far edge of the cemetery. 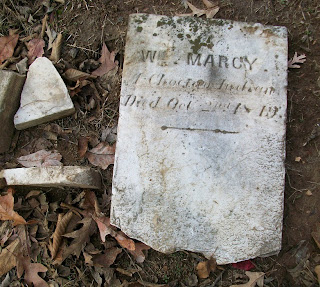 Wm. Marcy does not appear on any census in Livingston County and his name is absent from records at the court house. How he came to be in Livingston County is unknown.﻿ An old newspaper article on Smithland mentions this grave and said it belonged to Chief Dick Marcy. Was this an error - or not?

The Choctaw were not natives of western Kentucky.  How did Marcy get to Livingston County and was he just passing through when he died?  Was he old or young?  Did he have a wife and children?

Posted by Brenda Joyce Jerome at 4:41 AM 2 comments: Links to this post 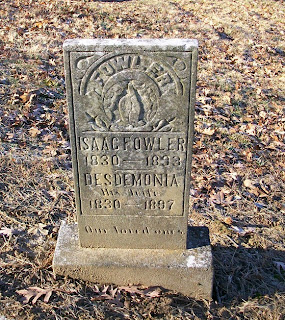 Isaac Fowler and Desdemonia Stone, both persons of color, married 25 December 1867 Livingston County, Kentucky. The 1880 Livingston County census shows them living in Smithland with their children Eddie and Gertrude. Gertrude Fowler Brooks, who died 3 June 1950, is also buried in Smithland Cemetery, but without a tombstone. Edgar (Eddie) Fowler died in Paducah 11 March 1923 and is buried at Oak Grove Cemetery.
﻿
Posted by Brenda Joyce Jerome at 4:47 AM No comments: Links to this post

The primary occupation  in the 1840s was agriculture, followed by manufacturing and trades and commerce. There were 2,487 persons in the learned professions and 968 were involved in river and internal navigation.

More Kentucky residents were members of the Baptist church than any other in 1847. They had 60,371 communicants. The Methodists had 26,710 members and the Presbyterians had 8,128 church members. There were 22 Protestant Episcopal clergymen and one bishop in Kentucky.

The constitution in effect in Kentucky in the 1840s was adopted in 1799. Every adult male citizen who had resided in the state two years and in the county or town in which he offered his vote one year was legally qualified. The Representatives were elected annually and the Senators served for four years, one-fourth being elected annually. The Governor was chosen for four years by a plurality of votes and was then ineligible for the next seven years.

Source: The Book of the World: Being An Account of All Republics, Empires, Kingdoms and Nations in Reference to Their Geography, Statistics, Commerce, &c, Vol. 1 by Richard S. Fisher, M.D., 1850.

Posted by Brenda Joyce Jerome at 4:22 AM No comments: Links to this post

Henry C. Spencer is enumerated in Caseyville District on the 1880 Union County census. In his household are Margaret Spencer, age 26, born England and Sarah Duncannon, age 13, sister in law, born Tennessee. The parents of Margaret and Sarah were born in Ireland, according to the census.

Posted by Brenda Joyce Jerome at 4:36 AM No comments: Links to this post 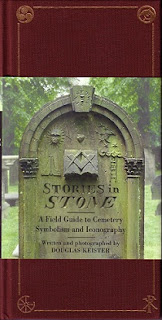 I've been meaning to tell you about a book I purchased at the FGS conference in Knoxville in August.  Books on tombstone art have a special place in my office and I refer to them often.  This new book is excellent. The title is Stories in Stone - A Field Guild to Cemetery Symbolism and Iconography, written and photographed by Douglas Keister.  The publisher is Gibbs, Smith of Salt Lake City, 2004 and is available at Amazon.com. The price is very reasonable.
The book is divided into chapters covering a number of subjects, including Secret Societies, Clubs and Fraternal Organizations and Mortality Symbols.  Did you know a vacant chair, usually depicted with a small pair of shoes, one usually on its side, symbolizes the death of a child?   Or that a broken wheel symbolizes a journey now ended?  This is a very nice book and  is small enough to slip into a bag to carry with you while visiting cemeteries.
It is always a pleasure to see good researchers compile their work and share with others. Terry Reigel has done just that with his website on the Cobb family, who were instrumental in settling the area now known as Lyon County, Kentucky.  You can visit his website Here    The Trek from Vermont to the Kentucky Wilderness can be found Here  Plan to spend some time on this website as there is a lot of information - fully documented, too.
Copyright on text and photographs
by Brenda Joyce Jerome, CG
Western Kentucky Genealogy Blog
http://wkygenealogy.blogspot.com
﻿
Posted by Brenda Joyce Jerome at 4:21 AM No comments: Links to this post

Ten years ago attendance at genealogical society meetings was high as that was the place to  go to get our fix on all things dealing with genealogy.  That is no longer true.  Today Internet with its chat rooms, message boards, blogs and websites and subscription services all compete for our attention, leaving little time to spend at a meeting where our genealogy needs are not being met.

So, how do we entice people to attend  and become active members of local societies?  It can be summed up in one word - Change. Change by bringing in new people with new ideas to serve as officers instead of recycling the same ones year after year.  Change by offering  workshops on a variety of subjects that will appeal to genealogists working on all skill levels.  Change by recognizing and embracing  new trends in technology, possibly offering an online version of the newsletter or quarterly. Change by utilizing an online payment service as a quick and easy way to pay  membership dues. But most of all, be willing to change if what you have been doing isn't working.

Does your society have a website and blog? Progressive societies utilize both as a way to promote the society and its activities. But don't stop there. Why not get your membership involved by gathering and posting genealogical material online? If you have a good online presence and offer something of value to researchers, your society will become stronger.

If you get the feeling I'm shaking my finger at you - you are probably right. If you care about your society, stop whining about decreased attendance at meetings and make some changes.   It's better than watching your society wither and die. 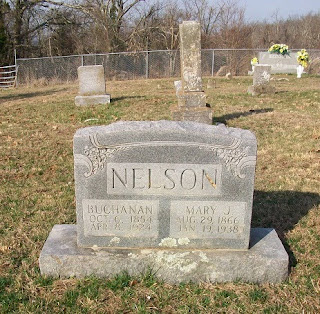 Buchanan Nelson and Miss Mary J. Standsberry were married at the home of the bride's father in Crittenden County by Dr. M. Bristow on 30 December 1885. 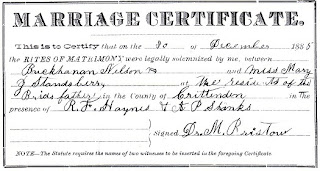 ﻿
Posted by Brenda Joyce Jerome at 4:32 AM No comments: Links to this post 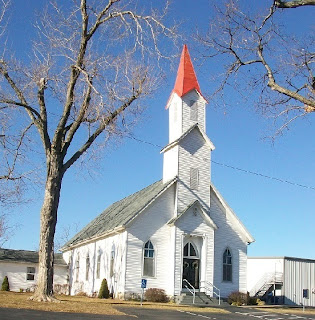 Two Hundred years ago the earth rolled and swayed, causing great fear in western Kentucky and beyond.  A series of earthquakes centered on the New Madrid fault line  began in the early morning hours of the 16th of December 1811. The earth split open, sometimes swallowing animals, trees and even people.  The earthquakes  were felt as far away as Charleston, South Carolina and Quebec, Canada.

The following account was given in a letter to a gentleman in Lexington from a friend at New Madrid, reported in the  Kentucky Reporter and accessed on GenealogyBank.

"About two o'clock this morning we were awakened by a most tremendous noise, while the house danced about, and seemed as if it would fall on our heads. I soon conjectured the cause of our trouble, and cried out it was an earthquake, and for the family to leave the house, which we found very difficult to do, owing to its rolling and jostling about. The shock was soon over and no injury was sustained except the loss of the chimney, and the exposure of my family to the cold of the night. At the time of this shock the heavens were very clear and serene, not a breath of air stirring, but in five minutes it became very dark, and a vapour which seemed to  impregnate the atmosphere, had a disagreeable smell, and produced a difficulty of respiration.

"Fifteen minutes after seven o'clock, we had another shock. This was the most severe one we have yet had -- the darkness returned and the noise was remarkably loud.  The first motions of the earth were similar to the preceding shocks but before it ceased we rebounded up and down, and it was with great  difficulty we kept our seats.  At this instant I expected a dreadful catastrophe - the uproar of the people heightened the colouring of the picture - the screams and yells were heard at a great distance."

The aftershocks lasted into the new year. On 23 January 1812, an earthquake of intensity comparable to the one in December occurred. That one was followed on 7 February by an even stronger earthquake. It is said the Mississippi River even ran backwards briefly, the course of the river was changed and Reelfoot Lake was formed. The aftershocks were numerous, but the three mentioned here were the most severe.

In Jefferson's Nephews  A Frontier Tragedy,  the author, Boynton Merrill Jr., referencing "The Winter the Mississippi River Ran Backwards" by Wayne Viitanten (The Register of the Kentucky Historical Society, Vol. 71, January 1973, 51-68) stated the following:  "The writhing and distortions of the Mississippi River were almost beyond belief. Above New Madrid the river bottom rose and formed a six foot waterfall that stretched entirely across the river. Boats were swept over this barrier until it, in turn, was wiped away by the current. Other boats were tossed about by freak waves that rose thirty feet above the normal water level."

Each of the three main earthquakes in this series have been estimated at a magnitude of over  7.0.  Western Kentucky was not heavily populated and no known deaths were caused by the earthquakes, but how frightened the people must have been! 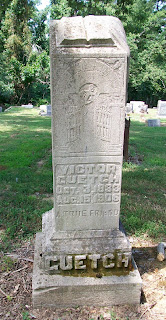 Buried Smithland Cemetery, Livingston County, Kentucky. Tombstone photographed 19 July 2010. Note the anchor, which is the symbol of hope, and the gates, which symbolize the passage from one realm to another.

On the 1880 Livingston County census, Victor Guetch was listed as a 44-year-old retail liquor dealer, who was born in France. ﻿
﻿

Posted by Brenda Joyce Jerome at 4:42 AM No comments: Links to this post

Slaves were considered property in Kentucky prior to the Civil War and, as property, they were subject to sale by their owners. The document relating this conveyance was called a bill of sale and, if recorded, can usually be found in deed books in Kentucky. The bill of sale for a Negro woman and her child was recorded in Caldwell County Deed Book A, page 72.

"Know all men by these presents that I James Thompson of Caldwell County and State of Kentucky have for the consideration of five Hundred Dollars paid in hand have Bargained and Sold unto David Doom and John Doom Both of the county and State Afour Sad one Negrow woman and Child Named Hannah whitch Negrow woman I warrent and Defend from all claimes or Claiments or any ... Impedament - Given under my hand this 15th of June 1809.  Jas. Thompson. Witness: Hugh S. Cochran.

"... Proven to be the act and deed of the said James Thompson by the oath of Hugh S. Cochran a subscribing witness thereto, and ordered to be recorded and that true copy stands of Record in my office. Given under my hand this 13th day of January 1810. John H. Phelps." 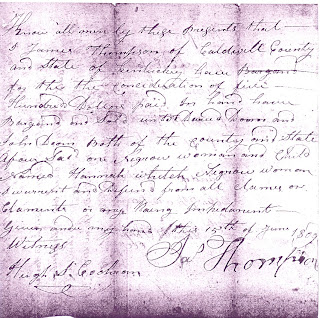 Posted by Brenda Joyce Jerome at 4:49 AM 2 comments: Links to this post