It was common for a couple contemplating marriage to draw up an agreement whereby the property of each person was to remain within their control and, after their death, to go to their own children. The following marriage agreement was between Eli Nichols and Mrs. Sarah Salyer, who married on the 28th day of November 1833 Caldwell County, Kentucky and was among loose papers in the Caldwell County Clerk's Office. The contract is presented in the exact language of the original document.

"This article of agreement, made and entered into This 28 day of November in the year of our lord 1833, Between Eli Nichols of the State of Kentucky and County of Caldwell of the one part, and Sarah Salyer of the County and State aforesaid, of the other part, Witnesseth, that the following agreement is made (towit) As follows, as I the said Eli Nichols, are agoing to Join in Wedlock with the said Sarah Salyer and I the said Nichols doth agree, that what ever property of any kind whatsoever she the said Sarah Salyer Shall fetch with hur to my House, at my death, or at hurs, which ever should be the Longest liver, it shall be understood, that each one shall be intitled to their own property, unless unavailable accidents, such as fire  death, &c and further, if it should please God to smile on us in our undertaking, and we should  make any thing more than a reasonable support, That I the said Nichols is willing, if I should be the longest liver to come to a fare division, with the heirs of said Sarah Salyer, and if she the said Sarah Salyer should be the longest liver, she is to do the same. In testimony Whereof we have hereunto set our hands and Seals the day and date above written.  [signed] Eli Nichols, Sarah (X hur mark) Salyer.  Attest: Jas. Perry, James (X his mark) Salyer." 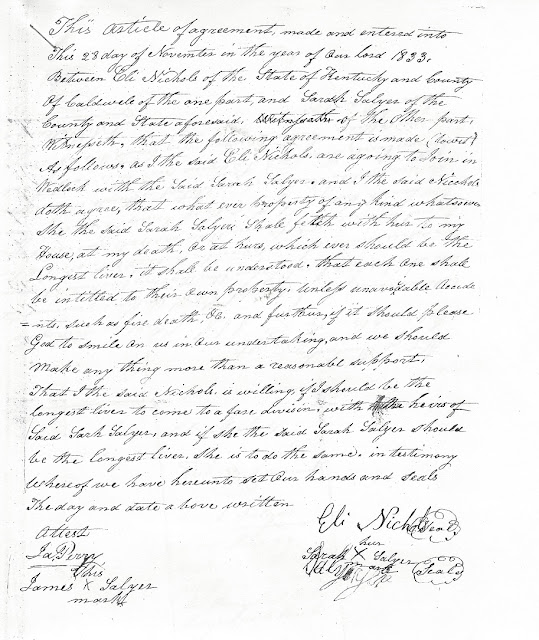