William and Sidney Conner and children, Mary, William, Amanda, Thomas, Samuel, Lydda and Rebecca, are enumerated on the 1850 Greenup County census. William is listed as an attorney  born in Pennsylvania and the rest of his family was born in Kentucky.[2] By early 1852, William and Sidney had left Greenup County and settled in Livingston County. The 1852 Livingston tax list shows he had 10 slaves, two horses, nine cattle and four children between the ages of 5 and 16. It must have been quite an ordeal moving the family and property from one end of Kentucky to the other.

William and Sidney did not live long enough to establish deep roots in Livingston County.  Sidney passed away on the 14th of March 1852 and William died just a few months later.[3] On 2 January 1854, their son, George D. Conner, was appointed administrator of William's estate[4] and settled the estate four years later.[5]

Other children were Mary Elizabeth, born ca 1831, married Henry Clay Bruce, who was in the steamboat business and represented Lewis and Mason Counties, Kentucky in the state senate in 1882 and 1884.[10] William H. Conner, another child of William and Sidney Conner, was born 26 Feb 1834 in Greenup County, moved to California in 1852 and then to Missouri in 1867.[11] He was in the dry good business in Plattsburg, Missouri. 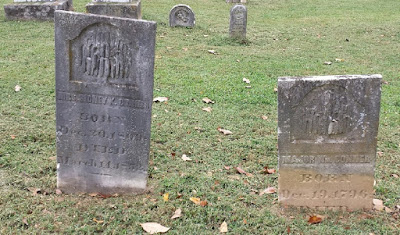 Sidney and William Conner lived in Livingston County long enough to leave a few records, but we don't know why they lived there.

Published 27 January 2016, Western Kentucky Genealogy Blog, http://wkygenealogy.blogspot.com/
Posted by Brenda Joyce Jerome at 4:00 AM No comments: Links to this post

Did you know that the downtown Smithland sidewalks were brick for many years? It's true, according to an article in an area newspaper.[1]

"The town council has let the contract and work is well under way for building concrete sidewalks throughout the entire town. Court and Front streets are the first to be laid and after that the others, as fast as the work can be done. The old brick walks, some of which have been in use over fifty years, are full of holes and have long since become an eyesore to our more enterprising citizens."


I didn't know that!

Published 22 January 2016, Western Kentucky Genealogy Blog, http://wkygenealogy.blogspot.com/
Posted by Brenda Joyce Jerome at 4:30 AM No comments: Links to this post 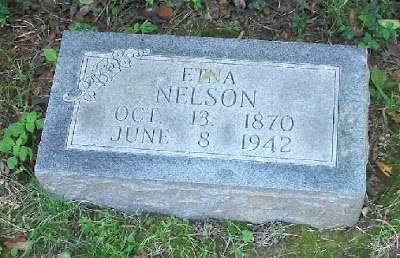 Etna Nelson was the daughter of John Ramage and Jane Gray.[2]  She appears as a 9 year old in the household of John and Elizabeth Ramage in Dyers Hill Precinct of Livingston County. [3] 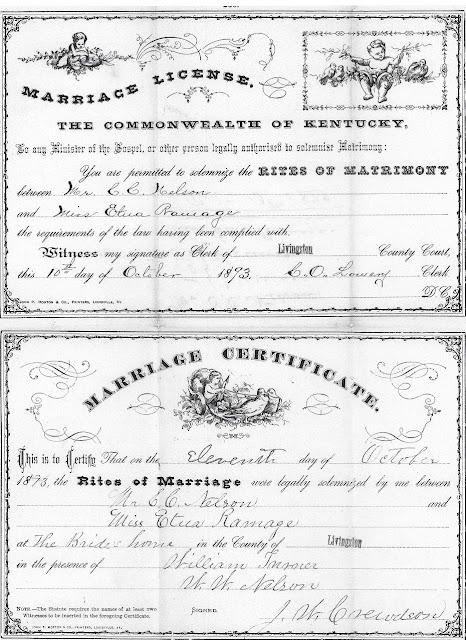 Published 19 January 2016, Western Kentucky Genealogy Blog,  http://wkygenealogy.blogspot.com/
Posted by Brenda Joyce Jerome at 3:00 AM No comments: Links to this post

Captain Thomas L. Henry, or "Guerrilla Tom" Henry as he was most commonly known, has been called one of the bravest men in Kentucky. When the Civil War broke out, he answered the South's call to arms by joining the Confederate Army. He was a man who would rather die than surrender and  at one time was on a battlefield in Kentucky literally shot to pieces and left for dead. However, he survived and lived many more years.

"Guerrilla Tom" joined the First Kentucky Infantry under Capt. Ingram, serving with Gen. Forrest for some time, but after three years of hard service, he joined Quantrell's band.  It is said that after Quantrell's band merged into the James band, a raid on the Morganfield Bank was arranged, but saved by Henry, after which he left the gang. During the war, Henry was captured, and so anxious were they to hold him that a double guard was put over him, but Capt. Tom Henry knocked them down left and right and after stealing two of their best horses, made good his escape and joined his men the next morning.

At the Battle of Fort Donaldson, Capt. Henry refused to quit fighting and when a surrender was inevitable, he swam the river under heavy fire and made good his escape.

One of his bravest and most daring acts was when he, with two other men, rode into Henderson while the city was overrun with Union soldiers with their flag flying from the court house, left his horse with his two followers, boldly walked through the guards, who thought he surely must have a pass. He took the flag, rushed down to his companions, and all made their escape.

Years later while Frank James was visiting W.W. Wynns in Sturgis and hearing that Mr. Henry lived nearby, requested to have him sent for, which was done. Mr. James told Mr. Wynns that Tom Henry was the truest and bravest man he had ever known.

After President Lincoln was assassinated, Henry was arrested as a guerrilla and brought before a court in Louisville, was tried, convicted and sentenced to be hanged, but was pardoned by President Johnson.  Henry died without ever having taken the oath of allegiance to his country.

He came home after the war, showing many marks of hard fought battles. Besides his face and body being marked from many bullets, the finger of one hand was shot off and also lost a portion of his tongue, which made it difficult for him to talk.

Thomas L. Henry was born in Union County, Kentucky 31 October 1841. His parents were William and Mary Henry. While he was in prison in Louisville, 1865, he professed religion. When he was released from prison he went to Texas, where he met Miss Lizzie Russell and married her 27 December 1866. To this union were born seven children, four daughters and three sons, all of whom survived Henry except one son.   Henry passed away at his home near Mattoon, Crittenden County, Kentucky 9 April 1909 and was buried at Bethel Cemetery, Union County.

Confederate soldiers and friends gathered in great numbers for the funeral of "Guerrilla Tom" Henry. Funeral services were conducted by Rev. R.C. Love of the Methodist Church of Marion.

Petitions often can place a person in a particular place between census records. The following petition shows T.J. Hackney living in the Bells Mines community of Crittenden County, Kentucky in 1869. The names of the signers to the petition were likely friends and neighbors who were familiar with his situation. The petition was found among loose county court papers, Crittenden County Clerk's Office, Marion, Kentucky. 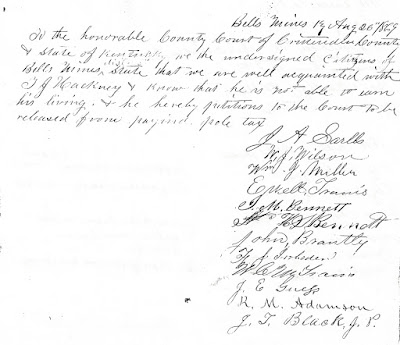 T.J. Hackney and his wife, Elizabeth, were living next door to James and Martha J. McLean on the 1860 Crittenden County census. By 1870, T.J. and Elizabeth Hackney had moved to Caseyville, Union County, Kentucky and were living in the household of James and Martha McClain [sic].  Thomas Jefferson Hackney had married Mrs. Rachael Aron  in 1831 Livingston County and Elizabeth Aaron in 1850 Crittenden County.

Published 8 January 2016, Western Kentucky Genealogy Blog, http://wkygenealogy.blogspot.com/
Posted by Brenda Joyce Jerome at 3:30 AM No comments: Links to this post 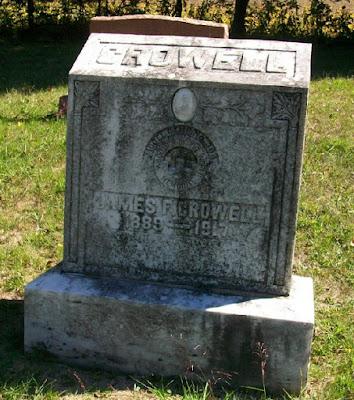 Buried Tosh Cemetery, Crittenden County, Kentucky. Tombstone photographed 23 September 2015. Note the Woodman of the World emblem and the faded picture of the decedent. He was 28 years old at his death.

James F. Crowell was born 12 May 1889 in Kentucky and died 28 November 1917 Rosiclare, Hardin County, Illinois. He was a miner and the son of James F. Crowell, born Tennessee, and Mary F. Harris.[1]

Mr. Crowell's death was the result of an explosion in the mines in Rosiclare.[2]

Posted by Brenda Joyce Jerome at 3:00 AM 2 comments: Links to this post

No more New Year's resolutions for me!  I make them and then I break them. From now on I am going to focus on what I have accomplished during the past year and think about, but not transcribe, what I would like to accomplish during the next 12 months. Fair?  I think so.

I continued to work on my Wolstenholme family during 2015. My 3rd great-grandfather, Hugh Wolstenholme, remains a bit of a mystery. Oh, there is a lot of information to be found about him online, but very little seems to be documented.  If you type his name into Google, up pops a long article on  NCpedia . How impressive is that!  The traditions are wonderful, but are they true?  I have been trying to prove or disprove them for some time and have not had much luck. It seems he just didn't leave many courthouse records and, naturally, there are no cemetery records.

Hugh Sr. participated in England's last revolution in  Pentrich in 1817. Because he took the wrong side during this fight and because he did not want to share the fate of his cohorts, Hugh fled England for the United States, leaving behind his wife and young children.  A big event is planned in 2017 to commemorate this revolution. I was honored by being asked to write a chapter on Hugh for a publication on the participants in the revolution.  What a thrill it would be to attend this event!

In July, we went to Pack Memorial Library in Asheville, North Carolina to see if they had anything about old Hugh. Because he was so colorful and his life so eventful, I was sure there would something, but, alas, there was not one thing found in their loose files or in a book of local history.  In fact, I left a biographical sketch of his life for their files. Maybe another Wolstenholme descendant will visit the library and see that sketch.

One of the traditions about Hugh Sr. says that he taught (later President) Andrew Johnson to read when Johnson was just a poor apprenticed tailor in Raleigh, North Carolina. It is said Hugh visited his tailor shop when Johnson later moved to western Tennessee. I have found references to Johnson being taught to read while serving as an apprentice in a tailor shop, but the tutor is never named.

On the positive side of this research, I did learn that Hugh's son, Henry F. Wolstenholme, made uniforms for Asheville Confederate  soldiers during the Civil War. Because they were in the cavalry, the seat of the pants had a double thickness.  That bit of information has been added to my growing stack of interesting trivia.

I have enjoyed the Wolstenholme research and don't get discouraged as there is always something else to check.

In 2016, Seth Flood (died 1778/1779 Henry County, Virginia) is my research target. He is shrouded in mystery and it is time to find out just who he really was.  With a name like Seth and a wife named Comfort, I doubt that he was a native of Virginia. I'm thinking Massachusetts or maybe even New Hampshire.

The only other thing on my list for 2016 is to slow down and enjoy life a little more. The past year has been far to hectic. I will let you know next year if I was successful.