﻿Blue Laws are nothing new in Kentucky. Even in the 1830s merchants banded together to keep stores and shops closed on the Sabbath. The following Article of Agreement among merchants, mechanicks, grocery and tavern keepers was found among loose county clerk's papers in Livingston County.

"We the undersigned traders & Merchants of the town of Salem, Ky. for the purpose of correcting some degree the pernicious practice of Opening Shops, Stores, &c on Sunday, do obligate ourselves to close & keep closed our doors on the Sabath, & in all cases refuse to trade with any who may come to town on said day to loiter & drink. And do further agree unanimously to present any Grocery, Store or Shop that persists in so unholy & unlawful practice in Salem. June 7, 1836. The above obligation is not to prevent the furnishing of medicin Shrouds &c Sent for by the sick or required for the Dead. [signed] Greer & William, [?] Johnson, G. Robertson, [?] Richardson & Greer, Jos. Watts, Bayliss & McCrosky, Joseph Watts & Co., H.M. Woods, Given Williams & Given, R. & W.U. Hodge, Bass & Williams." 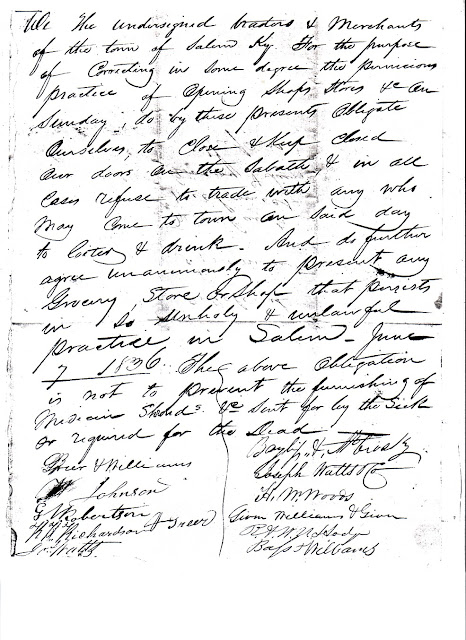 Published 31 Jan 2013 on Western Kentucky Genealogy Blog, http://wkygenealogy.blogspot.com/
﻿
Posted by Brenda Joyce Jerome at 3:00 AM No comments: Links to this post 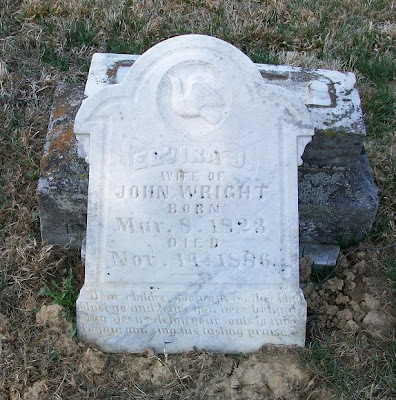 Elvira J.
Wife of
John Wright
Born
Mar. 8, 1823
Died
Nov. 14, 1886
Dear Children, Mother, too, give me your hand
Must go and leave you here behind
May Jesus deign your souls to raise
To join and sing his lasting praise 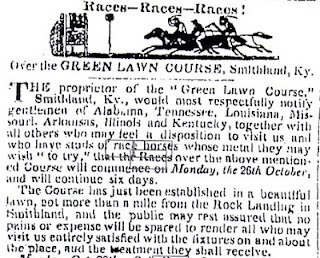 The 18 September 1846 issue of the New Orleans, Louisiana Times-Picayune (accessed through GenealogyBank) contains an advertisement for Green Lawn Course in Smithland, Kentucky. It is unknown how long this track was in existence.

This may have been the first official horse track in Livingston County, but it certainly wasn't the first episode of racing. According to a document in the Kentucky Dept for Libraries and Archives, in March 1840 Richard M. Nelson and James Fleming were charged with  "running a horse race on the highway leading from Salem to Smithland ... against the peace and dignity of the Commonwealth."

The highway between Salem and Smithland must have been  a popular place to race. In May 1840, John G. Wilson, James Evans and William McCane, yeoman, were charged with racing on the same road.   Also in May 1840 Thomas Ferguson and Washington Doyle got caught racing on the Salem-Smithland road.

Another popular road for racing was the Salem to Golconda highway. Wm. Doyle, James Fleming, James Evans, Wm. McCain, Kinchen C. Dorris and Anthony Hardin were charged with racing on that public road in May 1840.

The usual fine for racing on a public highway was $10.


Posted by Brenda Joyce Jerome at 3:00 AM No comments: Links to this post 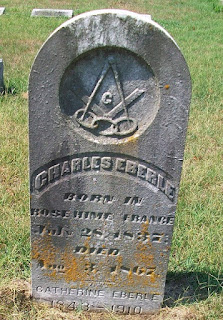 Charles Eberle
Born in
Rosehime France
July 28, 1837
Died
Aug. 3, 1867
____
Catherine Eberle
1843 - 1910
Buried in Pythian Ridge Cemetery, Sturgis, Union County, Kentucky. Tombstone photographed 11 July 2011. Note the symbols at the top of the tombstone indicating he was a member of the Masonic and Odd Fellows Lodges.
The 1860 Union County census shows Charles Eberle living in the household of F.G. and Frances Strube in Caseyville. All were born in France.  By 1870, Charles was deceased and his widow, Kate, age 37 and born Germany, was living in a separate household with her children Charles, 18; Willie H., 17; Josey, 16; Molly, 14 and Kate Eberley [sic], 13. A marriage record for Charles and Catherine Eberle was not located.
﻿
Posted by Brenda Joyce Jerome at 3:00 AM No comments: Links to this post

One of the oldest graveyards in the Salem, Kentucky area is the Pippin [Butler] Cemetery, located behind the old Butler home on Butler Lane. The cemetery is also accessible from the corner of Taylor and Berry Streets. The cemetery is in the middle of a cornfield and is on private property.

When the cemetery was recorded for Livingston County Kentucky Cemeteries (published 1977), nearly 20 tombstones were recorded, although some were almost unreadable. When my cousin and I visited the cemetery on 9 January 2013, we could not find some of the tombstones listed in 1977. Most of the tombstones are broken and all are littered with downed branches and bushes, perhaps from recent ice storms. 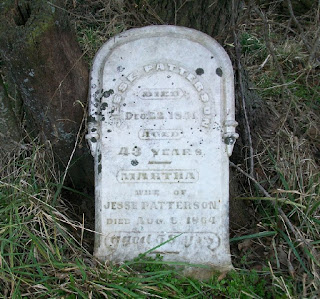 The most recent tombstone is that of Jesse Patterson, who died 22 December 1841 at the age of 43, and his wife, Martha, who died 6 August 1864 at the age of 58. Their tombstone appears to be of Vermont marble and is the easiest of all to read. It is broken from his base, but is not weathered as the other tombstones in this cemetery. 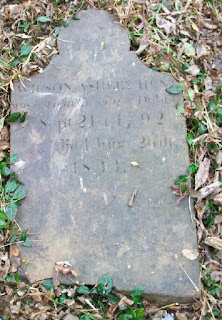 Nearby is the tombstone for Wilson Ashley Hunt, born in the City of Dublin 21 September 1792 and died 26 June 1833. He was the first husband of Martha Patterson. The cholera was epidemic in Kentucky during 1832-1833 so possibly this was the cause of his death.

There was a foot stone with the initials of S.M.W. No corresponding headstone was found.  When the cemetery was recorded in 1977, a foot stone with W.A.H. was also found. This, most likely, was for Wilson Ashley Hunt.

Also found was a small obeliske shaped tombstone with engraving on three sides. One side had Dallam  Our Little Clara  1846, another side had Our Little Charley  1847 and the third side had Mrs. S. Barbour, Grandma, 1789-1846. Very likely these were the children and mother of Camilla Barbour, who married Francis Henry Dallam 9 April 1839 in Caldwell County. The Dallam family lived in Livingston County before moving to Henderson.

A very large stone for William Bayless was broken and found on its side, leaning against some branches. I'll save the information on William Bayliss for another day as a separate post on the Bayliss family is being planned. 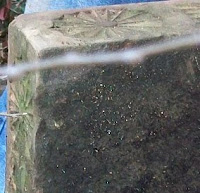 One of the most interesting tombstones found  was that of Mrs. Ann Johnson, who was born 13 November 1804 and died 5 April 1833. Her tombstone was broken and face down in the dirt. The year of her death was on a separate stone. On the edges of the thick tombstone were what appeared to be engravings of the sun.

There was also a stone with just the name Wigginton.

Published 17 Jan 2013 on Western Kentucky Genealogy Blog,  http://wkygenealogy.blogspot.com/
Posted by Brenda Joyce Jerome at 3:00 AM No comments: Links to this post 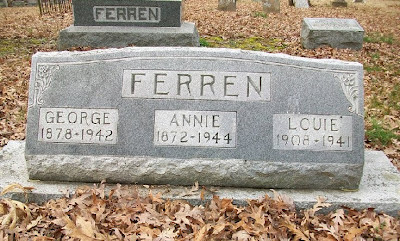 According to his death certificate, George Ferren was born 21 September 1878 and died 2 April 1942. He was the son of Peter Nelson Ferren and Elizabeth Hale.

The death certificate of Louie Ferren shows he was born 10 September 1908 and died 7 February 1941. His parents were George L. Ferren and Annie Robertson.

Annie Robertson Ferren's death certificate identifies her parents as Tom Robertson and Polly Mitchell. She was born 25 August 1872 and died 13 August 1944. Her obituary appeared in the 17 August 1944 issue of the Livingston Ledger. The funeral was held at Mint Spring Church. Survivors were listed as Mrs. W.L. Conn of Tiline, daughter, and I.T. Robertson of Smithland, brother, and four grandchildren.
Posted by Brenda Joyce Jerome at 3:00 AM No comments: Links to this post

Copyright by Brenda Joyce Jerome, CG
May not be copied without written permission﻿

Each county was divided into districts, each of which had an assessor and collector. Information was collected from each business, partnership, association and corporation that met the criteria set by Congress. Most states, like Kentucky, covered the years 1862-1866, but some states covered additional years (i.e. Arkansas, 1865-1874).

The lists give the name of the person taxed, his residence, the article or occupation taxed, the type of license and the amount of tax due.

If your ancestor operated a business or was a lawyer or physician, he should be listed. Some of the state lists are available on Ancestry.com, but Kentucky is not among them. However, you can order the lists for your county (western Kentucky was in District 1) from the Family History Library, using the following information: Internal Revenue Assessment Lists for Kentucky, 1862-1866, (National Archives Micro Publication M768, 24 rolls); Records of the Internal Revenue Service, Record Group 58; National Archives, Washington, DC. 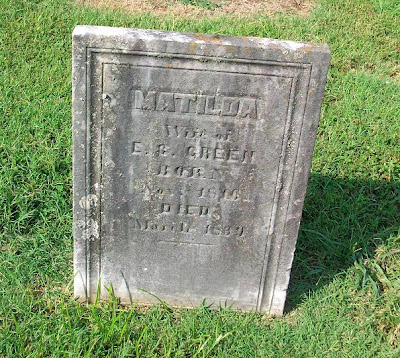 I am always curious about what drew people to settle in Smithland, Kentucky.  Economic opportunity was likely the draw, at least during the early days. Smithland was becoming prosperous during the 1830s and people from various countries and other states came to Smithland to become part of its growth.

One person who took advantage of Smithland's opportunities was Barruch/Barrick O. Thrift, who was born about 1808 in Virginia.   He married Margaret Hagey 22 December 1831 in Davidson County, Tennessee and by 1837 had moved to Smithland. Settling on Lot #7, at the corner of Front and Mill Streets, he was granted a license to keep a tavern in  his home. From that time, his name, usually given as B.O. Thrift, is found often in county records. He bought two lots, including his own brick dwelling house, just past where the Smith/Strait house stands today. Thrift was also a trustee of the Methodist Episcopal Church and a trustee of Ward 2 in Smithland.

Sometime after moving to Smithland, Thrift became a bricklayer and that was listed as his occupation on the 1850 Livingston County census. He was likely kept busy as many brick houses and businesses were constructed in Smithland during this time period. Did he help build the Olive-Davis home in 1841? Or the old courthouse in 1845? Or perhaps he helped construct an addition to the Gower House. 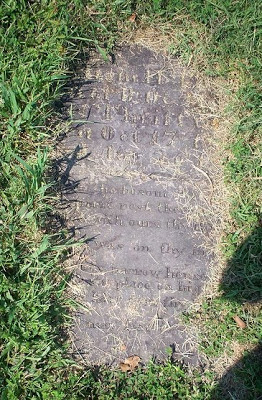 From Smithland to England

Life with its twists and turns often takes us far from home. This is what happened to a young lady from Livingston County, Kentucky. Ben Adaline McGraw  was born in Smithland on the 26th of January 1841. Her parents were John C. McGraw  and Lucy Jane VanAllen. These names may not be familiar to you, but you will recognize the name of Ben Adaline's great-grandfather, Stanley P. Gower, one-time owner of the Gower House.  Gower's daughter, Adaline Gower VanAllen, was the mother of Lucy Jane and the grandmother of Ben Adaline.  The Gower family had a story to tell, but this story is about Adaline McGraw. We'll save the Gower story for another day.


Adaline, her parents  and siblings appear on the 1850 Livingston County census. Not all of the McGraw children survived infancy. Tombstones in Smithland Cemetery mark the graves of  three McGraw children -  J.C. Jr., VanAllen and Ella. Ben Adaline's father, John C. McGraw,  was a hotel keeper at the Gordon House in Smithland in 1855. Perhaps hoping to provide a better life for his family, McGraw moved his family to Arkansas


The family is found on the 1860 Phillips County, Arkansas census and it was there that Adaline met  and married her husband, Powell Clayton, on 14 December 1865.  Clayton was born in Bethel County, Pennsylvania in 1833 and studied civil engineering in Delaware. He later moved to Kansas and during the Civil War, he joined the Union Army and rose to the rank of brigadier general.


After the Civil War, Clayton moved to Arkansas, where he met Ben Adaline McGraw and they had five children, with one dying in infancy. In 1868, Clayton ran unopposed for Governor of Arkansas and was sworn into office in July 1868. He was elected to the U.S. Senate in 1871 and served six years.  He was Ambassador to Mexico from 1897 to 1905. Powell Clayton died 25 August 1914 in Washington, DC and was laid to rest at Arlington National Cemetery.

In July 1916, Adaline McGraw Clayton sailed for England to visit a daughter.  The New York Times of 18 January 1917, reported the following: "Washington, Jan. 17 - A cablegram received today announces the death in Oxted, England of Mrs. Adaline Clayton, widow of General Powell Clayton, who was Governor of Arkansas and Ambassador to Mexico."  It is assumed Adaline was buried in England.


Adaline had traveled far from her birthplace of Smithland, Kentucky.

Published 3 Jan 2013 on Western Kentucky Genealogy Blog,  http://wkygenealogy.blogspot.com/
Posted by Brenda Joyce Jerome at 3:00 AM No comments: Links to this post 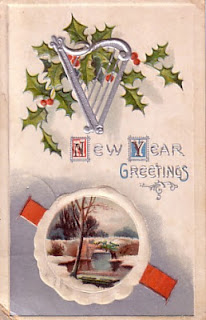 May you have a wonderful New Year filled with peace, happiness and good health. May you also break through at least one brick wall, opening up new avenues in your research.
Posted by Brenda Joyce Jerome at 12:00 AM No comments: Links to this post