Through Kentucky: Its Resources and Present Condition, The First Annual Report, prepared by Winston J. Davie, Commissioners of the state Bureau of Agriculture, Horticulture and Statistics, we are able to take a look at Webster County in 1878.

This county was taken from parts of Henderson, Hopkins and Union in 1860, and named for Daniel Webster. It is bounded on the north by Union, Henderson, and McLean, east by McLean and Hopkins, south by Hopkins and Crittenden, and west by Crittenden and Union.

Lying between Green river on the north and Tradewater on the south, Webster county presents all the varieties of surface and soil, from the overflowed bottom to the back-bone ridge. The basis of the entire county is of the true coal measures. Next to Hopkins, this county has probably more workable beds of bituminous coal than any other lying in the West Kentucky coal field. Mineral springs are very numerous; copperas water is frequently met with, and some rich salt water. The mineral springs at Sebree City are quite celebrated for their medicinal virtues, and are much used by invalids.

Tobacco is King of crops in Webster, then come corn, wheat, rye and the hay grasses. The fine corn and hay crops give profit to hog and mule-raising, numbers of which each year are exported to the South, or to the Henderson and Evansville markets.

Towns and Villages
Dixon, the seat of justice, is a handsomely-built town of about 500 inhabitants. It is located about the centre of the county, and contains a good brick court house and other public buildings, three churches, an academy, 3 tobacco factories, steam flouring mill, saw and grist mill, half a dozen mechanic shops, and several elegant private residences.

Slaughtersville, a thriving town of about 250 inhabitants, is located immediately on the St. Louis and Southeastern Railroad, and is one of the largest shipping points for tobacco on the road.

Sebree City is a pace of considerable trade, and enjoys a fine reputation on account of its excellent mineral water. It is one of the most fashionable watering places in Southwestern Kentucky; population 250.

Providence, 11 miles south of Dixon, is a flourishing town of 200 inhabitants.

Steamport,on Green River, Bellville and Montezuma on Tradewater, and Pools Mill, in the northwestern corner of the county, are neat villages, each with a large local trade.

Clayville, 6 miles southwest from Dixon, contains 200 inhabitants, and is quite an important tobacco manufacturing point.

Vanderburg is a beautiful village of 150 inhabitants.

At Dixon and Slaughtersville are well managed seminaries. Clayville Academy, under the able management of H.E. Echols, is a first-class institution. There are also other high schools in the county, beside the free common schools in every district taught under the State system.

Almost the entire population of Webster is descended from the good old North Carolina stock, and they keep up the habits and customs of that noble State. A more social, intelligent, hospitable, kind community cannot be found in Kentucky or the Western States.

There are large bodies of rich desirable land still unoccupied that the owners would willingly sell at low prices to actual settlers. To all such emigrants a hearty welcome would be given, and first class farms and homes, with future riches, would be the rewards of their removal to this county.
Posted by Brenda Joyce Jerome at 2:55 AM No comments: Links to this post 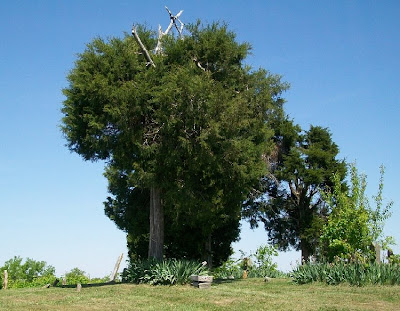 Looking for an old, family cemetery? Look for cedar trees, even dead ones. Families often planted cedar trees in the middle of family burial places. Another sign of an old cemetery is myrtle (or periwinkle), a green ground cover with small purple flowers.

The cedar trees above are found in the middle of the Duncan Cemetery, off Hwy. 365 in Crittenden County, Kentucky. The photograph is dated 9 April 2012. 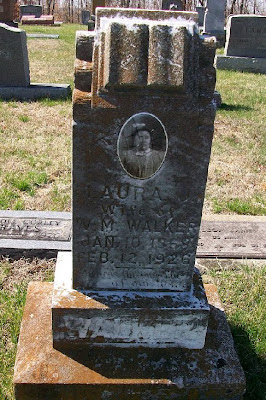 Boynton Merrill Jr., author of a widely acclaimed book on early Livingston County, Kentucky, died recently in Florida at the age of 86. His obituary appeared this morning in the Evansville Courier.

Mr. Merrill's book, Jefferson's Nephews A Frontier Tragedy, details the 1811 Livingston County murder of a slave by Lilburne and Isham Lewis, nephews of Thomas Jefferson. More importantly, the book portrays life in western Kentucky with fully documented sources. Many early residents are mentioned and the book tells of their role in the settlement of the area and the murder of the slave.

Jefferson's Nephews was first published in 1976 and has been reprinted at least twice. It belongs on the reference shelf of every western Kentucky researcher.

Thank you, Mr. Merrill. Rest in peace.
Posted by Brenda Joyce Jerome at 9:20 AM 1 comment: Links to this post 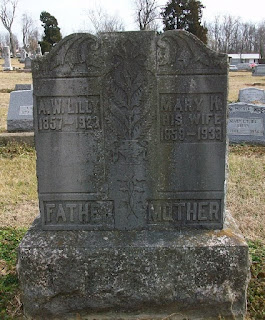 According to his Kentucky death certificate, Alex W. Lilly was born 1 January 1857 Henderson County and died 24 October 1923. His parents were James T. Lilly and Elizabeth Powell.

Both A.W. and Mary K. Lilly are listed as buried in Corydon Pine Hill Cemetery.

Following the swathe of destruction commanded by Gen. H.B. Lyon (CSA) during the latter part of the Civil War, counties in western Kentucky had to scramble to find a place to hold court, often changing locations several times. This is evidenced by the following entries in the Hopkins County, Kentucky Court Order Book 1863-1865. Keep in mind that the Hopkins County Court House was burned 17 December 1864.

page 392, 15 May 1865
On motion of W.P. Fowler, Judge of the Hopkins Circuit Court, it is ordered to be certified upon the records of this court that the Court House of Hopkins County has been burned by order of the Rebel General Lyon and (that in accordance with the provisions of an act of the Legislature of Kentucky approved at the called Session 1865) that the present May term of the Hopkins Circuit Court be held at the Cumberland Presbyterian Church in the town of Madisonville ... and the same be taken & used & known as the Court House for this term.

page 403, 30 May 1865
It appearing that the Court House of Hopkins County has been destroyed by Rebels and that there is now no Court House for the use of the courts, it is therefore ordered that the house in Madisonville heretofore known as the "Old Clerk's Office" be and is hereby selected as the place for holding the court of sd. County and sd. building is hereby declared to be & is the court house ...

page 404, 30 May 1865
Ordered that W.O. Hall, John G. Morton, G.L. Weatherly and C.C. Young be appointed commissioners to have the walls of the burned Court House secured and preserved and the brick belonging thereto taken care of. They are also authorized by the court if in their opinion they should believe it to be in the interest of the county to let out the repairing and rebuilding the brick walls, to do so to the lowest bidder ...

page 523, 20 November 1865
It appearing ... that the Court House is not sufficiently repaired for the purpose of holding court and that the courthouse selected as the public one is not sufficiently large and commodious ... therefore ordered that the Methodist Episcopal Church South of this place be selected as the place for holding the present term of the Hopkins circuit Court and citizens and officers are hereby directed to respect it as such and govern themselves accordingly.

Posted by Brenda Joyce Jerome at 2:42 AM No comments: Links to this post 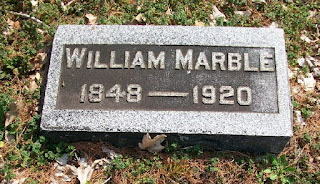 In 1895, William Marble and his wife, Anna H. Marble, applied for a passport to go abroad. He gave his birth date as 8 September 1848 and his physical description as 5 feet 4 inches tall, brown hair, blue gray eyes and fair complexion. His passport application is found under Passport Applications 1795-1905 on Ancestry.com

Posted by Brenda Joyce Jerome at 3:34 AM No comments: Links to this post

Caldwell County, Kentucky County Court Order Book A May 1809 - October 1815 is featured this month on Western Kentucky Genealogy Books
Posted by Brenda Joyce Jerome at 3:35 PM No comments: Links to this post

Nuncupative Will of Stephen Bennett

In 1833, Stephen Bennett declared his nuncupative will in Caldwell County, Kentucky. It was located among original wills of that year in the Caldwell County Clerk's Office in Princeton. This is what it says:

"Isaac B. McElroy declared on oath that Stephen Bennett died 23d day of June 1833, at his own house in Caldwell County - that in his last sickness and in the early part of the day on which he died he called the said Isaac and one Rowland M. Langston to take notice of his wish and request as to the deposition of his property; that the said Bennett did then, while in his perfect senses, and while he was of sound and disposing mind, say and declare that he wished as much of his property sold, including his crop of tobacco, and such as his family did not [crossed out] would not particularly need, be sold to pay his debts, that he wished the balance of his estate to be kept together for the purpose of raising his family or until they came of age; that his negro girl Viced he wished his wife to have as long as she lived; and that he wished David Perry to be his executor.

Rowland M. Langston came into Court and being duly sworn declared on oath that the said Stephen Bennett died on the 23d June 1833 at his own house in the sd. county, that in the last sickness of the sd. Bennett and in the forenoon of the day on which he died, while he was of sound and disposing mind, the sd. Bennett called on the said witness and one Isaac B. McElroy to take notice of his wish and request as to the deposition which he wished made of his property ...

It is ordered and considered by the Court that the foregoing be established the nuncupative will of Stephen Bennett dec'd. " 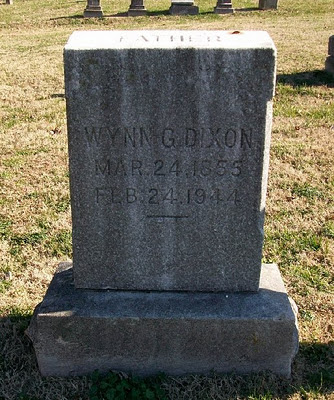 According to an obituary in the 25 February 1944 issue of the Henderson Morning Gleaner, Wynn G. Dixon died at the age of 89 years at his home in Detroit, where he had lived for a number of years. Survivors included four children, Mrs. Neal Fowler of Chicago, Rudy Dixon of Cairo, Ill. and Charles and Wynn Dixon of Detroit plus five grandchildren. He also was survived by nieces Mrs. Sam Wathen, Mrs. Clyde Willingham and Mrs. Walter Server.
Posted by Brenda Joyce Jerome at 3:21 AM No comments: Links to this post