When George W. Walton died in May 1923 in Henderson, Kentucky, he had witnessed two wars and many changes in this country. Born in New Jersey 11 April 1823, he attended school until the age of 15 years and when 23 years old he enlisted in the Mexican War and served through campaigns in Mexico.

When the Civil War broke out, Walton enlisted in Cobbs Battery (CSA) and was severely wounded when a Union soldier ran a bayonet through his shoulder. He spent months in the hospital and was told he would never be able to fight again as he had little use of his arm and shoulder. However, he returned to his regiment and remained until the surrender.  Walton was granted a pension (#1094)  for his service in the Civil War on 17 July 1912.

Walton came to Henderson around the time of the Civil War and followed the trade of a plasterer. The last 18 years or so of his life he was not been able to perform manual labor and was cared for by his friends at his home on Ingram Street.  He had only one known relative, a niece in Baltimore, Maryland.

Funeral services for George A. Walton were conducted by the pastor of Immanuel Baptist church and burial was in Fernwood Cemetery, Henderson. 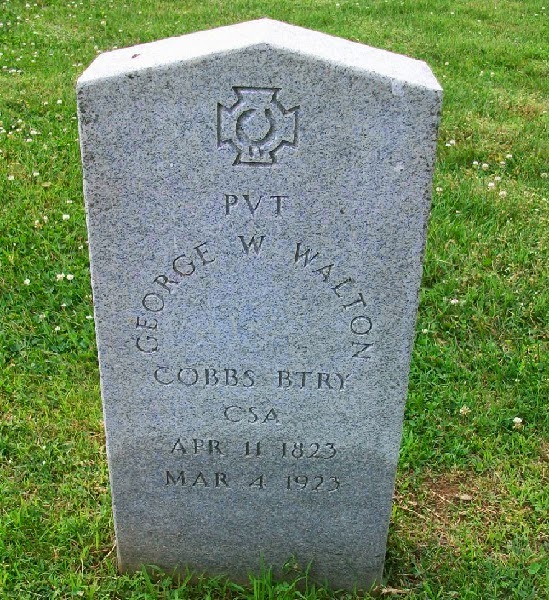 Notice the Southern Cross of Honor and the pointed tombstone, both of which identify this as a CSA veteran of the Civil War.