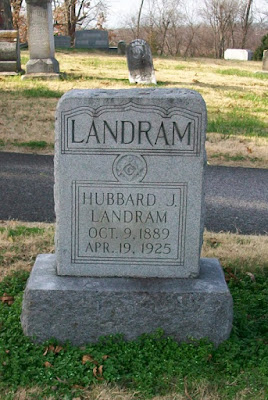 According to his death certificate,[1] Hubbard J. Landram was born in Grand Rivers, Kentucky and died in Benton, Marshall County, Kentucky. He was the son of George W. Landram (born Livingston County) and Dora A. Mitchusson (born Lyon County, Kentucky). He was married at the time of his death.

Hubbard J. Landram went to California before 1910, the year he was enumerated on the census in San Francisco.  He was married to a lady named Maria and gave his occupation as a motorman.[2] That same year, he registered to vote and stated he was a Republican and lived at 124 Lakeview Avenue, San Francisco.[3]

Landram moved back to Kentucky before 1916, at which time he was living in Paducah and was working at M.V.L. Motor Car Company.[4]   When he registered for the military draft in 1917, he was single, working in Benton and living in Paducah. [5]