When my great-grandmother,Mary Ann Wolstenholme Smith, died in 1933, our country was  at the lowest point of the Great Depression.  Money was scarce and placing a tombstone on Mary Ann's grave was out of the question. Fortunately, my dad, who was 20 years old when his grandmother died, attended her funeral, remembered where she was buried and passed along that information  when I became interested in genealogy. It is one thing to know where someone is buried and another thing to have that burial spot identified for future generations.

Mary Ann lived with her children, rotating  from one household to another. She told stories to my dad and his siblings about growing up in Davidson County, Tennessee, but either Mary Ann or my dad "fluffed up" the stories of her background. Census records show her family lived a simple life. Whatever the circumstances were, my dad spoke highly of her and she was an important part of the family.

I have always felt a certain affinity for Mary Ann and wanted to get a monument to mark her grave. My generation is the last that will remember where she is buried. When we are gone, there will be no one who knows where she is buried. So, at our last Joyce family reunion, I mentioned what I wanted to do. Several cousins spoke up and offered to help.


A little over a month ago the tombstone was set and there will be no doubt where Mary Ann is buried. She rests beside her husband, Reddick Smith, in Central Cemetery in Hardin County, Illinois.  This was very important to me and I feel like Mary Ann and her family are pleased. 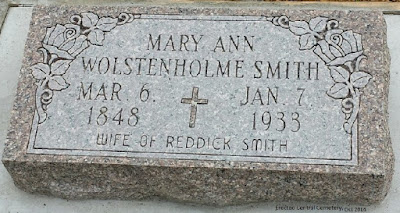