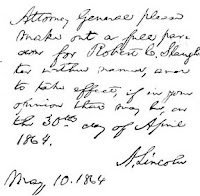 Louisville, Ky May 2nd 1864
His Excellency A. Lincoln
President of the United States

Mr. President
Inclosed you will please find copy of Information filed against Robert C. Slaughter by the District Attorney for the District of Kentucky in the District Court. Also copy of Slaughter’s plea & exhibits. The Court has not active in the premises, but intimated that he did not think the case was one of the Cares[?] Contemplated by your proclation[?]. I am clearly of the opinion that Slaughter’s case is embraced in your proclamation. I know his to be a meritorious case and have determined to appeal directly to you in his behalf. As a general rule I have no Confidence whatsoever in rebels either before or after taking oaths. And I have less confidence in those who do not take up arms in the rebellion but remain at home aiding it in every possible manner - that I have in those who go out and fight - There are however exceptions and I know Slaughter to be one who has not only done all that is set up in his pleas but he has gone further he has given information to the Federals of the whereabouts of the enemy. He has but a few days since been arrested and abused by the rebels - There is no question but that he has in good faith returned to his allegiance. This proceeding has doubtless been instituted at the suggestion of the purchase of his land Sold after his return to Kentucky from the rebel army - the same the notes were executed for that are sought to be confiscated. Slaughter has been at his home since last decr. was one year ago. His conduct has uniformly been that of a true and loyal citizen. He has by his conduct and conversation won the confidence and esteem of all the Union men in his community. And incurred the displeasure of all rebels. If his case does not come within the proclamation I certainly [illegible] appeal directly to the clemency of Your Excellency and I do most earnestly ask that you grant him a pardon. And I do hereby vouch for his faithful observance of his oath. I am Mr. President Very Respectfully Your Obedient Servant, J.M. Shackelford.

United States of America District Court for the District of Kentucky. The United States against Robert C. Slaughter. The defendant Robert C. Slaughter comes and for plea to information filed against him ... the deft. having been a captain in the rebel army, was a prisoner of war at Camp Chase, having been captured by the Federals at the battle of Fort Donelson. That on the -- day of Novr 1862 he was exchanged. That at the time of his exchange he persistently refused to again take up arms against the United States Government and that he did then and there abandon the rebel army and the rebel cause. That on the -- day of Decr 1862 in pursuance with a proclamation of Major Gen. Rosencrans then commanding the Dept. of the Cumberland the deft. voluntarily came in and surrendered himself to the military authorities of the United States at Russellville Kentucky and took the oath of allegiance to the United States Government. He did return to his home in Webster County where he has since continued to reside. He states that at no time since the battle of Fort Donelson has he been in arms against the Federal Government Nor has he aided the rebellion in any way whatever.
Posted by Brenda Joyce Jerome at 7:34 PM