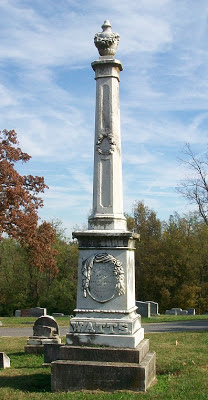 One of the most impressive tombstones in Smithland Cemetery in Livingston County, Kentucky is that of Joseph and Lucinda Watts. Close to the road that winds up the hill in the middle of the cemetery, it commands a view over the midsection of the cemetery. The tombstone was photographed 24 November 2011. 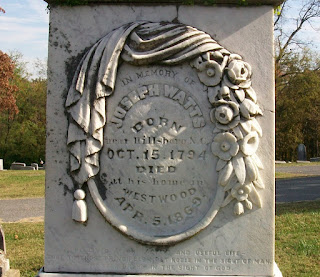 In Memory of
Joseph Watts
Born
near Hillsboro, N.C.
Oct. 15, 1794
Died
At his home in
Westwood
Apr. 5, 1869
He lived a long active and useful life
True to those principles most noble in the Sight of man,
Most worthy in the sight of God
Westwood was a town established in 1811 on The Point, the piece of land directly across the Cumberland River from Smithland. The town no longer exists. 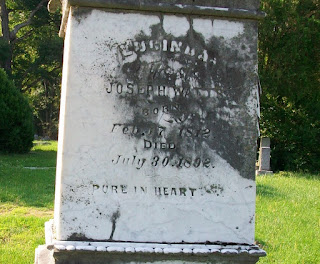 Lucinda
Wife of
Joseph Watts
Born
Feb. 17, 1812
Died
July 30, 1892
Pure in Heart
Joseph Watts and Lucinda D. Haynes were married 11 July 1827 in Livingston County. They were the parents of William Courtney Watts, author of Chronicles of a Kentucky Settlement.
Published 21 May 2013, Western Kentucky Genealogy Blog,  http://wkygenealogy.blogspot.com/
﻿
﻿
Posted by Brenda Joyce Jerome at 3:30 AM

That is really interesting, across the river, wow, how did they get him across to bury him in Smithland? thanks Brenda,
pat c