The long-awaited 8,000 square feet addition to Willard Library at 21 First Avenue, Evansville, will open Saturday, 7 February 2015. The ribbon cutting will be at 2 p.m., followed by tours and a Victorian Tea.

The genealogy collection will remain on the second floor of the library, but there will be a bit more room as the Archives will move from the second floor to the new addition.  A Gallery in which art and historical exhibits will be displayed will be included in the addition, also. The library's operating hours can be found Here

This will be a good chance to see how Willard Library has grown, but it might be wise to go early as there is sure to be a crowd. 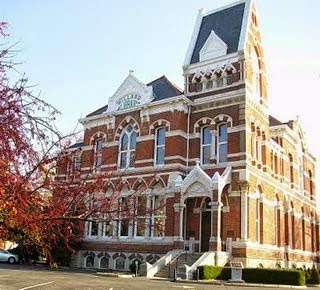 Willard Library
Before New Addition (in rear of building)