On this, the 97th anniversary of Mother's birth, I want to share a birthday card she received from my father on 7 July 1937, less than a month before they were married. Always thrifty (he would scoff if accused of being a romantic), he sent the card again to her on their 25th wedding anniversary. 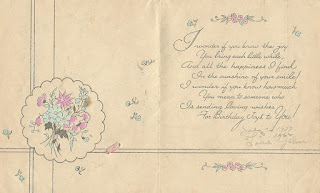