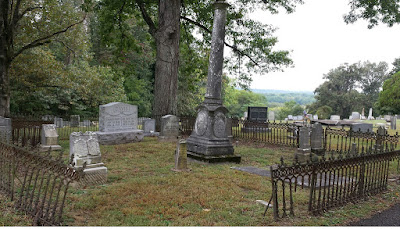 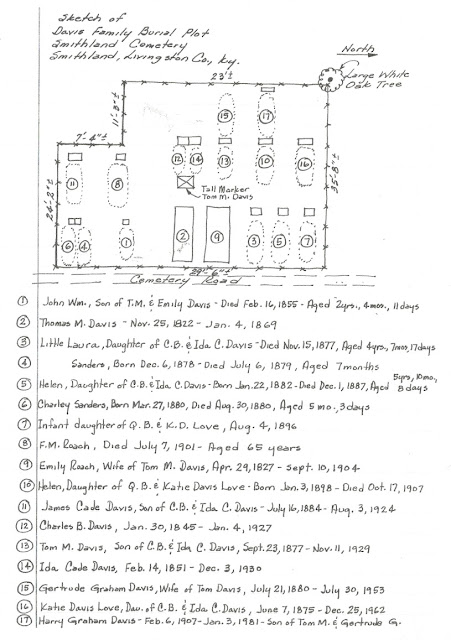 Richard Graham Davis of Paducah has generously allowed us to publish his sketch of the Davis burial plot in Smithland Cemetery. He has numbered and identified each grave within the plot. Buried here are Thomas M. and Emily (Roach) Davis, their children and connections. An atmosphere of haunting beauty envelopes the Davis plot.

Thomas M. Davis was the son of John Davis and Harriet Cook, both of Livingston County, Kentucky. Tom M. Davis had two  brothers, John N. and William R. Davis, who were both deceased. [1] John Davis died before 6 December 1830, when his widow, Harriet, was granted letters of administration upon her husband's estate.[2] Harriet remarried in 1833 to Stephen Lyon.[3]

The 1850 and 1860 Livingston County census records both list merchant as the occupation of Tom M. Davis.  He was also a Constable and Deputy Sheriff in Smithland.[5]

"Mrs. Emily Davis died this morning ... at  the residence of her daughter, Mrs. W.H. Sanders, in Arcadia..
Mrs. Davis was born in Lyon county, but lived most of her life in Smithland. She was the wife of Mr. Thomas Davis, of Smithland, who died about 35 years ago, and two children survive her, Mrs. W.H. Sanders and Mr. Charles B. Davis, of Smithland, besides several half brothers and sisters who reside in Paris, Texas.

"The remains were brought to the city this morning and are at the residence of Mrs. Wm. Hughes, on West Jefferson street. The funeral will be tomorrow at Smithland. A boat will be chartered to take the remains and the family and friends to Smithland Sunday morning and the funeral services will be held at the Smithland Methodist church of which Mrs. Davis was an old and zealous member."