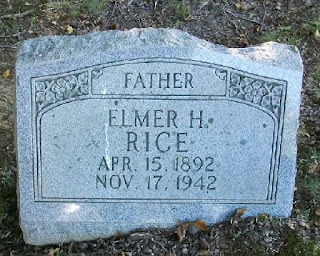 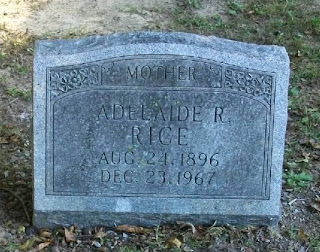 Elmer H. Rice's Kentucky death certificate #23806 (1942) shows he was the son of William Rice and Dosie Raughoff.  Elmer died in the V.A. facility in Christian County, Kentucky. His usual residence was in Marion, Crittenden County.  His World War I Draft Registration cards for 1917-1918[1] show he was born in Equality, Illinois and, in June 1917,  he was living in Detroit, Michigan. The next year he was living in Crittenden County.

A passport was issued 13 May 1919 to Adelaide Retailland Rice, French-born wife of Henry H. Rice. Her passport application was made at the American Consulate in Nantes, France while her husband was in the U.S. military in France. She sailed on the Manchuria from France to New York.[2]

Elmer and Adelaide Rice can be found on the 1920 Crittenden County census.

Elmer also has a military tombstone. 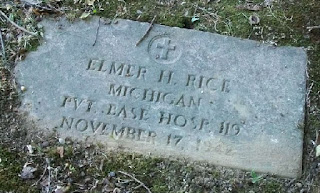