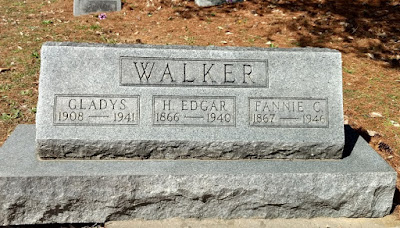 Hugh Edgar Walker was born 26 May 1866 in Crittenden County and died 31 December 1940.[1] His first wife was Wilmoth (last name unknown) and they were living in Stoddard County, Missouri in 1890.[2] On 9 February 1895, Hugh E. Walker married Miss Fannie C. Towery at the Methodist Church at Shady Grove, Caldwell County, Kentucky. [3]

Gladys Walker, daughter of Hugh Edgar and Fannie C. Walker, was born 11 November 1908 Kentucky and died at a hospital in Henderson, Kentucky 18 March 1941.[4] According to her obituary,[5] she attended Murray State Teachers College and, following completion, was a teacher for the next 14 years. She was a member of Bells Mines Cumberland Presbyterian Church.