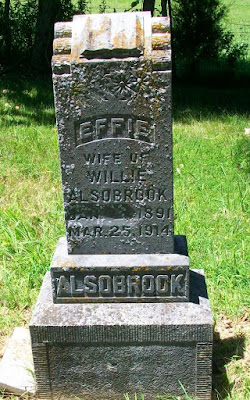 According to her death certificate, Effie Alsobrook, was the daughter of Marion Boswell and Nora Vanhuser, both of whom were born in Kentucky. Her burial place is given as "Sanders Cemetery."[1] The cause of her death is given as "General Tuberculosis," from which she had suffered  for three years.

The 1910 Livingston County census listing of  the family of Marion and Nora shows a daughter, Effie L., born Jan 1891, and a daughter Carry, born Aug 1895.[2]  Apparently, Effie's sister, Carrie/Carry, was the second wife of William Hayden Alsobrook. According to the double tombstone of Hayden and Carrie Alsobrook, they were married 16 July 1916. [3]