A wrong name on a document can cause all sorts of problems. If you accept only one record for proof of relationship, you may be  creating a brick wall for yourself. For example, if you accept the identity of Betty Gibbs' father on her death certificate, you could be wasting time searching for a man who does not exist.

James M. and Betty T. Gibbs died just two days apart in 1937 and both are buried in Pinckneyville Cemetery, near Salem, in Livingston County, Kentucky. 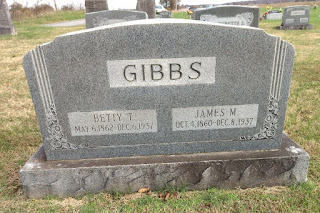 On her death certificate, Frances Elizabeth (Betty) Gibbs is listed as the daughter of James Monroe and Lucinda Jones .[1] What a coincidence that Bettie's husband and her father share the same name.  That is definitely a red flag and begs to be checked out to make sure the name is correct. It didn't take long to determine her father's name was wrong.

The first record checked was a marriage record.  James M. Gibbs married Bettie Taylor in 1880 Crittenden County. [2] Going backward a few years shows the following:  Elizabeth Taylor was living in the household of Calep [sic] and Lucinda Taylor on the 1870 census.[3] Ah ha!  Lucinda is listed as Bettie's mother on Bettie's death certificate, but was Lucinda's maiden name Jones?  Yes!  Caleb W. Taylor married Miss Lucinda K. Jones in 1861 Crittenden County.[4]  So, it appears that even though the name of Bettie Gibbs' father is incorrect on her death certificate, the name of her mother is correct.  She was, in truth, the daughter Caleb Taylor and Lucinda Jones.