John B. Signaigo - From Genoa to Smithland

During the mid-1800s, Smithland, Kentucky was a virtual melting pot of people born in foreign countries. The local population included people from Ireland, Germany, Italy, France, Switzerland, Isle of Guernsey, Nova Scotia and other countries.

In December 1847, John B. Signaigo came to the United States from Genoa in the Kingdom of Sardinia and settled in Smithland.[1]  He first appears on the 1848 Livingston County tax list with 1 white male 21+ and one store valued at $400.  1850 Livingston County census shows the Signaigo family living in Smithland and John B. Signaigo's occupation was given as grocer.[2] Living with the family was James Zanone, who was also from Genoa and a grocer.

Signaigo leased part of lot #19 at the corner of Level and Water (Riverfront) Streets for his store. In August there was a tremendous storm which uprooted trees and  sank steamboats Dover and Caldonia at the wharf in Paducah. Considerable damage was also done to the Patterson House in Smithland.[3] As a result of the storm, the building housing Signaigo's grocery was partially destroyed. Samuel W.  Patterson, who owned the property, agreed to lease the lot to Signaigo for 10 years if Signaigo would erect a 2-story frame house and use and occupy the property himself. [4]

Shortly after settling in Smithland, Santinos, infant son of John B. and Frances Signaigo died and the next year, in 1849, their infant daughter, Mary, also died. Both are buried in Smithland Cemetery. They had at least three more children, all born in Smithland. They were Frank A., Elizabeth and Mary. 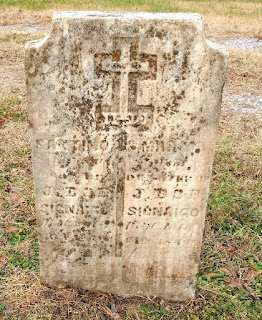 The Signaigo family last appears on the 1870 Livingston County census before moving to St. Louis, Missouri. It was there that John B. died in 1873[1] and Frances died in 1894.[2] They, along with their children, Frank A. Signaigo, Elizabeth Signaigo Collins, and Mary Signaigo, are all buried in Calvary Cemetery in St. Louis.