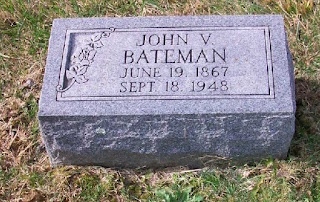 John V. Bateman was the son of Samuel and Nancy C. (Vaughn) Bateman, who had married 16 Jan 1862 Crittenden County, Kentucky.[1] The family moved to Randolph County, Arkansas, where they are found on the  1870 census living next to former Crittenden County residents, David W. Kimsey and his wife, Mary S. (Vaughn), and their children. [2]

Although he had married in 1939, John V. Bateman was enumerated in the household of his son-in-law and daughter, Winfield M. and Vera Clopton in Paducah, McCracken County, Kentucky in 1940.[6]

Bateman was a farmer and veterinarian.

John V. Bateman died in Metropolis, Massac County, Illinois on the 18th of September 1948 at the age of 80, according to his obituary in  the Paducah Sun-Democrat on Tuesday, 21 September 1948. Survivors were his wife, Elizabeth; three daughters, a daughter in law, two sisters and  two brothers. The funeral and burial were at Ditney (now known as New Union) Church and cemetery