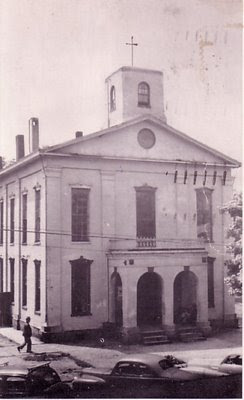 Crittenden County Courthouse
Built 1871
Gen. H.B. Lyon is often credited with torching several western Kentucky courthouses, including the one in Crittenden County, but this is likely incorrect. There is reason to believe the courthouse and perhaps the county jail  were, in fact, burned by guerrillas. The majority  of county records survived as the county clerk's office was located in a separate building in the public square and did not burn.

However, it was a loss when the courthouse was burnt in January 1865 as there was nowhere to hold county or circuit court. Shortly after the fire, M.G. Gilbert, county jailer, was requested to procure a house in Marion in which to hold the May session of circuit court. Until that time, circuit and county courts were to be held in the office of Sheriff W.C. Carnahan.
While temporary quarters could be found, it was still necessary to have a courthouse and a way had to be found to pay for it. According to Acts of General Assembly of the Commonwealth of Kentucky, Chapter 894, An Act for the Benefit of Crittenden County, was approved 10 February 1865. The county court was authorized to levy an additional poll tax of $1.00 on each tithable and a tax of ten cents on each $100 worth of taxable property. Also, the county was allowed to collect a tax of 75 cents on each dog owned by any person in the county as of the 1st day of January 1865. The funds arising from the taxes were to be set aside and used for the purpose of rebuilding the courthouse.  This act was to remain in effect for six years.
Now that a way had been found to pay for the courthouse, J.E. McCluskey was hired to take down, clean, stack and cover the bricks from the old courthouse. It is assumed they were to be used in building the new courthouse.
It is also assumed that the old jail was destroyed as there were plans to build a new one at the same time a new courthouse was to be built. On the 24th of April 1865, R.H. Haynes, J.L. Hill and D. Bourland were appointed to sell the old jail timbers and iron and have the rock in the foundation removed to where the new jail was to be built.
In June 1865, a new plan for the new jail was presented with T.H. Dickerson as the builder at a cost of $3660. Just one month later, it was learned that the new jail had been located in the wrong place. Dickerson had already begun excavating for the foundation and had hauled rock to the location. Dickerson was ordered to fill up the excavation and move the rock to the correct location in the southwest corner of the public square.
Things were not moving quickly for the erection of the new courthouse. In October 1865, commissioners were appointed to advertise and let out the building of the new building.  The court hired J.K. Frick of Evansville to draw a plan for the new courthouse. Frick woud later, in 1869, draw up plans for the courthouse in Christian County and, a few years later, drew up plans for a new courthouse in Livingston County.
The Crittenden County courthouse was to be built of brick on the old foundation and as nearly as possible on the plan of the former courthouse except there was to be one large room for the grand jury and four small rooms upstairs for the use of the petit jurors. The cupola was to be smaller than the one on the old courthouse and the roof was to be of tin. The job was to be completed by the first day of January 1867. Until the courthouse was completed, two rooms over J.L. Dean's Drug Store were used for jury rooms and W.C. Carnahan's house was used as a courthouse.
The newly-built courthouse was damaged in early 1870 when a tinner set the roof on fire while working on the courthouse roof. In June 1870, commissioners were appointed to again build the courthouse and, on 10 October 1871, the commissioners filed their report and the courthouse was accepted. This courthouse remained in use until 1961, when it was torn down and the current courthouse was built.
Copyright on text and photographs
by Brenda Joyce Jerome, CG
Western Kentucky Genealogy Blog
http://wkygenealogy.blogspot.com
Posted by Brenda Joyce Jerome at 3:44 AM