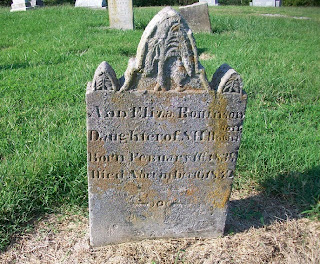 Buried Smithland Cemetery, Smithland, Kentucky. Tombstone photographed 27 September 2010.  The tree on the tombstone is probably a version of the weeping willow tree, the symbol of grief and sorrow.

Scattered throughout Smithland Cemetery are tombstones from the 1830s and 1840s.  Often the families who buried their loved ones at that time in the cemetery were recent arrivals to Smithland and often moved on to other places.  S.H. Robinson, the father of Ann Eliza, appears on the Livingston County tax lists from 1840 through 1844.  Even though he is shown with one town lot in Smithland on the tax lists, no record of the purchase or sale of a lot has been found. He appeared  on the 1840 Livingston County census with 2 young males and an adult female. He and the female are both between the ages of 20 and 30. He does not appear on the 1850 census.

Posted by Brenda Joyce Jerome at 3:17 AM