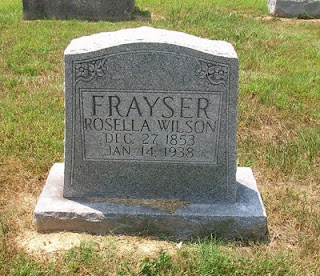 Rosella, also known as "Aunt Rose," was the daughter of George P. Wilson and Margaret Crabtree, who lived in the Bells Mines area of northern Crittenden County. She married Henry C. Frayser of Cave-In-Rock, Illinois 31 October 1894.  Henry C. Frayser died in 1923 and is buried in Cave Hill Cemetery in Illinois.  Rosella was living with her sister and brother in law, Mr. and Mrs. George Hill, at the time of her death. ﻿She had no children.