Sometimes we find part of a probate record in one county and then find supporting data in another county. This usually happens when a new county is created during the probate process. For example, William Wood wrote his will 20 September 1806 while living in Livingston County, Kentucky (Will Book A, page 25). His will was produced in Livingston County court and proven in April 1807. His will names his wife Anne Wood, son Spencer Wood and his "four youngest children." The inventory and appraisal of Wood's estate were recorded 6 February 1809.  You might think that was the end of the settlement of his estate, but was it?  In addition, we don't know the names of any of the "four youngest children" of William Woods. If there is nothing more in Livingston County, maybe it would be wise to check Caldwell County, which was created from Livingston in May 1809.

Ah, ha! The Wood family did, indeed, live in the part of Livingston that fell into Caldwell County in 1809. Caldwell County Deed Book A, page 304 shows that on 31 August 1811, there was a conveyance of land on Flynns Fork of Tradewater from Benjamin Vaughn to Ann Woods and Spencer Woods, heirs of William Woods dec'd.

Caldwell County marriage records show that Nancy Wood married John Barnes in 1816.  Then, in 1818, Rachel Wood married Mathew Ledbetter. Consent was given for both marriages by their mother, Ann Wood, and Spencer Wood was the surety on the marriage bond. Then, in 1821, Spencer Wood married Rhoda Smith. Sure sounds like the children of William Wood. In 1823, Rhoda Wood married Seth Baker ... curious! The document that tied this all together was found in a box marked "Depositions" in the Caldwell County Clerk's Office. It reads thus:


"Memo for Auditor of Accounts
I have found a tract of land Situate in this County Containing 98 acres - Conveyed by Ben Vaughn to Ann Wood during her life and then to Spencer Wood her Son & his heirs - (Widow & heirs of Wm. Wood dec'd) now the Widow is dead, and the said Spencer also, who died before the Widow & before he got possession, Spencer had one child supposed to be dead, her mother married again and went to Mississippi taking her with her & has never been heard of Since except that the child was dead. She moved to Mississippi about 15 years ago. Deed in Book A page 304." 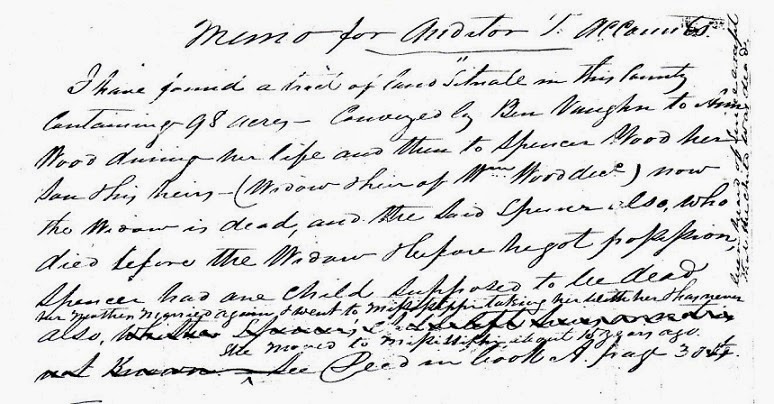 Thank you for all of the info on Wm and Ann Woods, especially the info on Spencer and his wife.

Thank you for this additional information. I'm glad this post was helpful.

May I have your permission to copy this info from your blog for my tree?

Permission is given to use the info from my blog as long as credit is given to the blog. Thanks for asking. Brenda