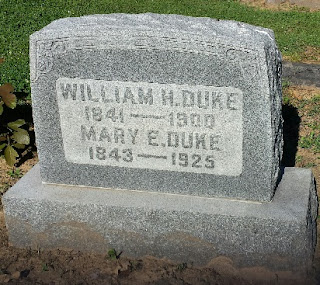 The last appearance of William H. and Mary E. Duke together on a census was on the 1880 Caldwell County census in Enumerator District 158. William H. Duke was the enumerator in that district. Listed in the household were Wm. H. Duke, age 38; M.E. Duke, age 37, and their daughter, Charlie, age 18.

After William H. Duke's death, his widow continued to live in Princeton. In 1900 she lived on North Jefferson  Street. Included in her household were her daughter and son-in-law, Charlie and Edward D. Barnett, and their son, Edward.  They moved to the Bronx, New York before 1920 and are found in Bronx Assembly District 5, that year.