In 1858, naturalization petitions could be filed in any Kentucky court, but are usually found in the county court or circuit court order books (minutes)  in western Kentucky. Information includes the name of the petitioner, his place of birth, when he arrived in the United States and his intention to become a citizen.

"This day Patrick Duffie personally appeared in open Court and produced a Certificate from the Clerk of the Crittenden Circuit Court duly authenticated showing that he had on the 26th day of July 1856 in the Crittenden Circuit Court made the Necessary Declaration of his intention to become a citizen of the United States of America and having declared on Oath that he will support the Constitution of the United States and that he doth absolutely and entirely Renounce and abjord[?] all allegiance and fidelity to any foreign Prince potentate state or sovereignty whatever and Particularly Victoria Queen of England & Ireland whereof he was last a subject and having produced to the Court satisfactory evidence of his having resided in the United States five years at least and in this state one year at least  & that during that time he has behaved as a Man of Good Moral Character attached to the principles of the constitution of the United States and well disposed to the good order and happiness of the same Whereupon the said Patrick Duffie is declared to be and is hereby admitted a citizen of the United States." 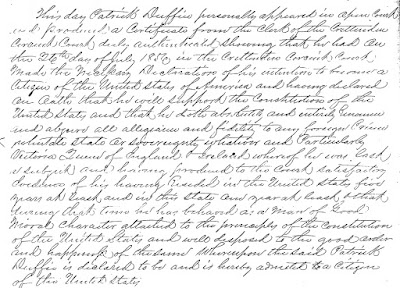